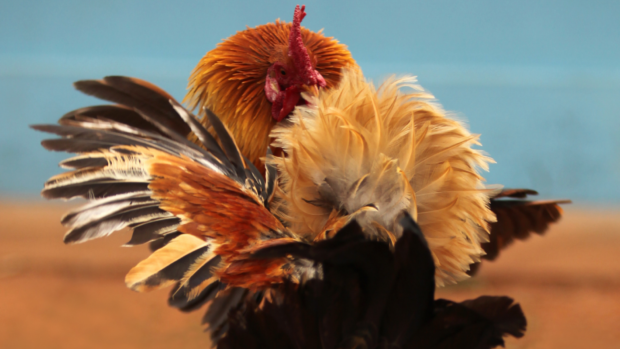 Cockfighting was one of the Filipinos’ favorite past time. INQUIRER.net STOCK PHOTO

MANILA, Philippines — Until the disappearance of the 34 missing cockfight enthusiasts is solved, the franchise application of the e-sabong firm operating the arena involved in some of the cases will not move forward in the legislative mill, Senator Grace Poe warned Friday.

“As with most of our colleagues, it also disturbs me that four out of six cases happened in arenas being operated by the franchise applicant, Lucky 8 Star Quest Inc.,” Poe, who chairs the Senate public services panel, said during the resumption of the investigation into the missing individuals led by the upper chamber’s public order committee.

The franchise bill of Lucky 8 Star Quest Inc. was endorsed for plenary approval last month and is awaiting the action of the upper chamber.

“As chairperson of the committee on public services, it is my responsibility to make sure that the franchise applicants are free from any liabilities, among other requirements, before the grant of a franchise. Again, I believe to move forward; we need first to resolve these issues,” Poe went on.

During the hearing, Poe said the Senate investigation into the disappearance of the 34 cockfight enthusiasts not only underscored the social costs of gambling but also “revealed a more glaring reality about the e-sabong industry.”

“And while I believe that regulation of the industry is necessary, it was clear from the discussion that the existing regulatory framework for e-sabong under Philippine Amusement and Gaming Corp. (Pagcor) is plagued with problems and deficiencies,” she added.

She said there are a lot of issues to be resolved, including the lack of CCTV cameras inside the cockfight arena as well as the proliferation of game-fixing and the lack of oversight in the issuance of permits by the local government and Pagcor.

“We should also consider the lack of an impact assessment study on e-sabong as part of Pagcor’s deficiencies, considering that more Filipinos are patronizing the online game not only as a form of entertainment but also as a way out of poverty,” Poe said.

“Unlike the traditional sabong, its accessibility and availability anytime and anywhere expose everyone, even children, to gambling. Presidential Decree (PD) 449 or the Cockfighting Law, which governs the traditional sabong does not extend its limitations on operations schedule to e-sabong. Pagcor should look into this as well,” she added.

The Senate, public order committee, opened its investigation into the disappearance of 34 persons — up from 31 — allegedly involved in e-sabong game-fixing and cloning from April 2021 to January this year.

After the first hearing last week, 23 senators signed a Senate resolution calling on Malacañang and Pagcor to suspend the e-sabong operations until the disappearances have been resolved.

During Friday’s hearing, Lucky 8 Star Quest Inc. owner Atong Ang denied his company has something to do with what happened to the cockfight enthusiasts as he pointed to an alleged “conspiracy” being hatched against him.