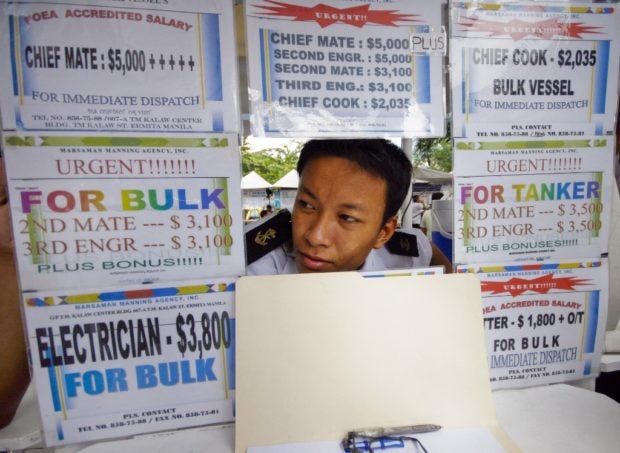 FILE PHOTO: An employee of a Philippine staffing agency for seafarers mans the recruiting booth at a seafarer’s park in Manila. The Philippines supplies a third of the worlds merchant mariners, whose remittances help to buoy the economy amids the global credit crisis. AFP PHOTO/LUIS LIWANAG (Photo by LUIS LIWANAG / AFP)

MANILA, Philippines — Around 30,000 Filipino seafarers may lose their jobs if an international standard on the training of seafarers is not implemented by the country, Senator Joel Villanueva warned on Thursday.

Villanueva, in a statement, called on the Maritime Industry Authority (Marina) to address the problems that may arise if maritime training schools for seafarers are found to be noncompliant with the International Convention on Standards of Training, Certification and Watchkeeping for Seafarers (STCW).

The STCW is a treaty which ensures that the training a country provides for its seafarers is at par with global standards.  The European Union (EU), where a huge chunk of Filipino seafarers are either located or are moving to and from, uses the said standard.

If found that the country’s maritime education is not complying with the STCW, the EU can revoke the recognition for Filipino seafarers.

“Our seafarers greatly contribute to our economy, especially during the pandemic. Let’s save this sector from drowning. Let’s keep our Filipino seafarers world class by following international standards,” Villanueva said.

Villanueva’s fears come from the possibility of adverse findings from the European Maritime Safety Agency (EMSA), which examines whether the state of a country’s maritime education is up to the standards set by STCW.

In the past, observers have raised concerns that a negative findings from EMSA could be a bigger stumbling block to sending Filipino seafarers abroad, rather than the COVID-19 pandemic, because this would derail the deployment of workers.

According to Villanueva, Marina should be held liable and be made to explain to seafarers should EMSA issue a negative finding on the country’s maritime education.

“If we cannot comply or if we receive a negative assessment, MARINA should answer to the thousands of our seafarers who are at risk of losing their jobs. We hope it does not come to that scenario,” he noted.

Numbers provided by Villanueva, as per the EMSA Outlook for 2020, the Philippines is still the leading non-EU country in terms of having the most seafarer officers working in EU-flagged vessels, with a total of 30,615.

All of these workers, who contributed around US$6.5 billion to remittances in 2021, may lose their jobs if the recognition of Philippine-issued STCW certificates are revoked.

Currently, there is a standing March 10, 2022 deadline from the EU to respond to the deficiencies reported by EMSA, particularly on the subject of the use of simulators and on-board training.

This is not the first time that the Philippines was asked to improve the state of maritime education and training in the country: in 2014, the EU gave the Philippines until July of that year to address deficiencies in the training process.

READ: EU to Philippine maritime sector: Shape up or ship out

On Marina’s side, the agency has tried to comply with the audit from EMSA several times in the past.  In 2018, Marina implemented measures required by EMSA to ensure safety in sea travel.

Still, Villanueva is concerned whether Marina was able to fully implement all of the actions required by EMSA.

“The STCW is very clear on the competencies required of the graduates, certified seafarers, and the quality assurance system to which the programs were certified. Does the Philippine internal audit of STCW compliance show that we will be able to submit a satisfactory response to the latest EMSA audit and the continuing recognition of the Philippine Certificates for the various STCW levels?,” he added.

Villanueva is pushing for a Magna Carta for Filipino Seafarers through Senate Bill No. 2369, which will require both MARINA and the Commission on Higher Education (Ched) to work hand-in-hand in keeping the country’s maritime education, training, and certification at par with the STCW.

Currently, the measure is at the second reading in the Senate.  Villanueva is looking to continue deliberating the proposal after the session resumes in May.