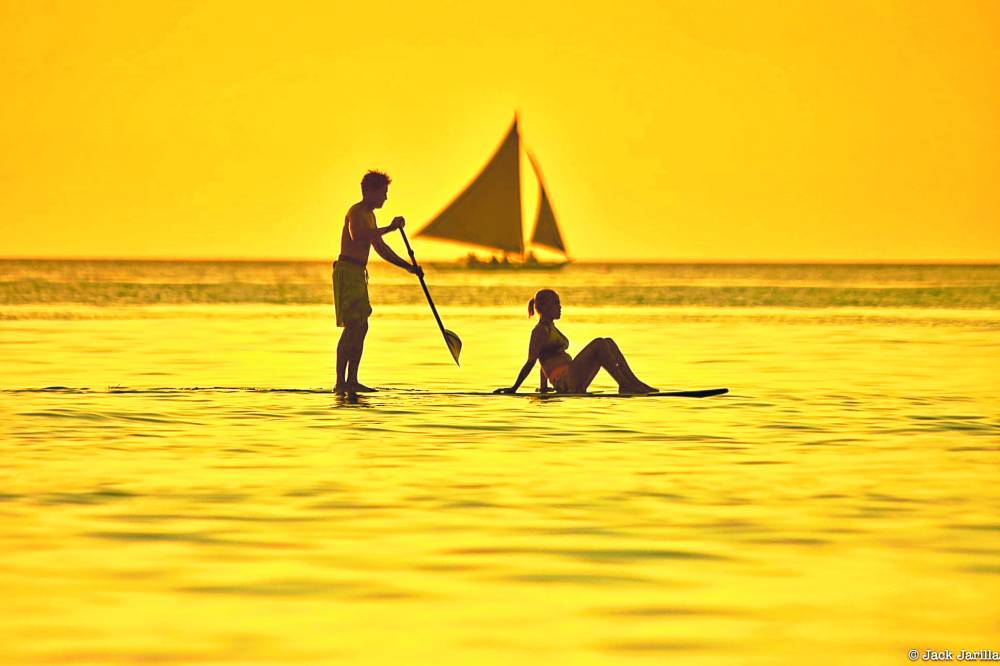 GOLDEN HOUR A couple on a paddleboard glides through the calm waters of Boracay Island amid the soothing backdrop of the setting sun on Jan. 29. The resort island in Malay, Aklan, is bracing for the arrival of local and foreign tourists as travel restrictions are eased. —JACK JARILLA

(From February 10 to February 28, 47,715 tourist arrivals have been recorded. Forty-five percent of them are returning Filipinos while 55 percent are foreign tourists.)

According to data from the Department of Tourism (DOT), a total of 26,306 foreign visitors and 21,409 returning Filipinos have arrived in the country as of the said date.

Puyat said most of the international arrivals were from the United States, Canada, United Kingdom, South Korea, Australia, Vietnam, and Germany.

In a separate statement, Puyat said the DOT sees a sustained recovery of the tourism sector, which was heavily impacted at the height of the pandemic. She also noted that travel to the Philippines is now much easier than before.

“We are proud to say that our entry requirements are delivered in a simple format, without the need for facility-based quarantine primarily for fully vaccinated visitors,” she stated.

“Tourists are allowed to travel to all reopened tourist destinations in the country as long as they comply with the requirements from the local government units with jurisdiction over these areas,” added Puyat.

Apart from the suspension of the risk classification system for foreign territories, fully-vaccinated tourist travelers from visa-free countries specified under Executive Order 408 are no longer obliged to undergo quarantine if they can present a negative RT-PCR test result.

Since it reopened to tourists on February 10, the Philippines has allowed entry to fully-vaccinated international leisure travelers from visa-free countries.

According to Puyat, international arrivals have increased since then, and the DOT expects a further increase during the summer season and the Holy Week in April. Jericho Zafra, INQUIRER.net trainee