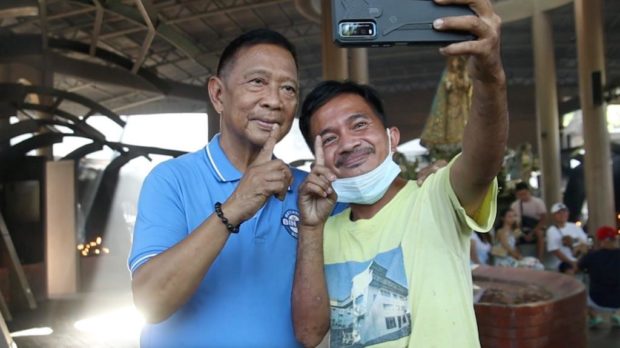 Former Vice President and senatorial candidate Jejomar Binay poses for a selfie during a visit to Manaoag, Pangasinan.

“Right now, it takes years to secure a permit and operate new power plants,” he said.

The former vice president said that the long approval process makes it hard for supply to catch up with demand.

Existing power plants, on the other hand, are prone to frequent breakdowns and cannot meet rising power demands.

Earlier, the Independent Electricity Market Operator of the Philippines (IEMOP) warned of thinning power supply in Luzon during the summer months.

The National Grid Corporation of the Philippines (NGCP), on the other hand, had warned in January of thin power supply in the Luzon grid during the summer season, citing projections from the Department of Energy (DOE).

The DOE had said power demands in Luzon would hit 12,387 megawatts (MW) during summer. The projection is 747 MW higher than the 11,640MW recorded for the same period last year.

Binay said the country cannot afford a return to the prolonged power outages of the 1990s.

“It will not only inconvenience the public but affect businesses and the economy,” he said.

Binay noted that some power plants in the country are already in need of maintenance.

“If we keep on running them to keep up with current demand and defer maintenance, this could lead to frequent and longer maintenance periods for them in the future,” he said.

Former VP Binay to run for senator under UNA party