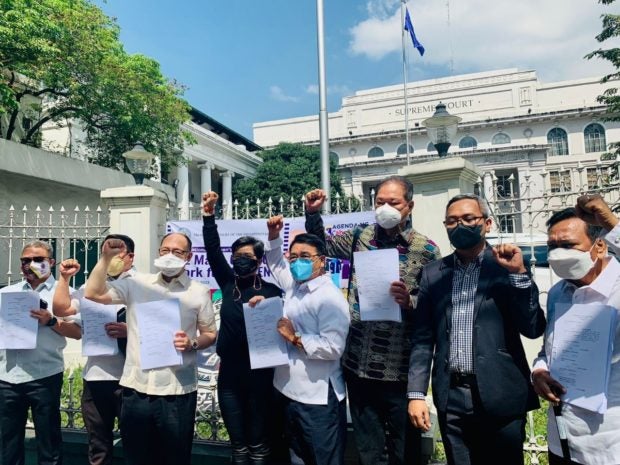 Petitioners against the Anti-Terrorism Act of 2020 file on Wednesday, March 2, 2022, a joint motion for partial reconsideration before the Supreme Court. They plead the high court to reconsider its December 2021 ruling declaring most of the provisions of the law as “not unconstitutional.” Photo from the Integrated Bar of the Philippines

MANILA, Philippines — The Supreme Court (SC) is being urged to “take an even closer look” at the Anti-Terrorism Act of 2020 that “terrifies, torments, and terrorizes its own people.”

Groups and individuals in the 25 of over 30 petitions against the anti-terror law filed a joint motion for partial reconsideration before the SC on Wednesday, citing the “exceedingly transcendental importance of the matter at hand and how it impacts on the sacred values enshrined in our Constitution.”

In their motion, the petitioners plead “that this Honorable Court revisits with an even closer look and reconsiders its judicial sanction to a law so monstrous and pernicious it will devour us all down the road in the end.”

The SC ruled in December that the Anti-Terrorism Act of 2020 is constitutional except for these two parts of the law: the qualifier portion of Section 4 and the second method for designation under Section 25.

The high court struck down for being overbroad and violative of freedom of expression the qualifier portion of Section 4 stating that “…which are not intended to cause death or serious physical harm to a person, to endanger a person’s life, or to create a serious risk to public safety.”

The recently filed joint partial motion for reconsideration focuses on three provisions: Section 10 (Recruitment to and membership in a terrorist organization; Section 25 on Designation of terrorist individual, groups of persons, organizations, or associations; and Section 29 on Detention without a judicial warrant.

[IN SET] : Petitioners vs the Anti-Terror Law filed their Joint Motion for Reconsideration of the SC decision that largely held the law to be “not unconstitutional” today at the Supreme Court. pic.twitter.com/50dYvLlrp7

The SC, in its ruling, said that the law punishes membership in a terrorist organization if the person voluntarily and knowingly joins such a group whose purpose is to sow terror.

The petitioners, however, argued that a person may not instantly determine if an organization is formed to sow terror if it is not proscribed or designated by the United Nations Security Council (UNSC).

According to them, such a vague portion of the anti-terrorism law’s Section 10 is prone to interpretation by the police and the military since the law itself failed to provide a mechanism to determine which organization is organized for the purpose of engaging in terrorism.

Voting 8-7 in December, the SC declared as valid the third manner of designation which allows the Anti-Terrorism Council (ATC) to designate as terrorist an individual, group, or organization based on its own determination, without trial.

The author of the main ruling, now-retired Justice Rosmari Carandang, lost to the majority. She believed that the designation by the ATC “lacks proper safeguards and remedies for an erroneous designation.”

Cited in the ruling are the instances where dissenters were labeled as terrorists.

The petitioners mentioned that one of their co-petitioners, a volunteer teacher for the Lumads, was recently killed in a supposed “encounter” with the New People’s Army.

They pointed out that the anti-terrorism law has no criteria on how to designate an individual or organization as a terrorist. They also said that there is no opportunity for the designees to present their own evidence since there is no notice and hearing and they have no access to the government’s evidence given its confidential nature.

Once designated as a terrorist “renders the designee vulnerable to arrest and detention,” they stressed.

The Anti-Terrorism Act of 2020 states that the ATC can issue written authorization for the arrest and detention of a suspected terrorist. Under the same provision, detention is within 14 days but may be extended to 10 more days if there is a need to preserve evidence or complete an investigation.

But the petitioners insisted that this provision has destroyed the two safeguards in the Constitution to guarantee the protection against unreasonable arrests: 1) that only a judge can order and 2) that a warrant of arrest must be issued upon determination of the probable cause.

The 24-day detention without any clear way how a suspected terrorist can secure his or her liberty, according to petitioners, “could result in his torture to coerce a confession, which is the experience in lengthy custody.”

Lawyer Tony La Viña emphasized the importance of the Supreme Court reconsidering its ruling, saying the law “has deadly consequences.”