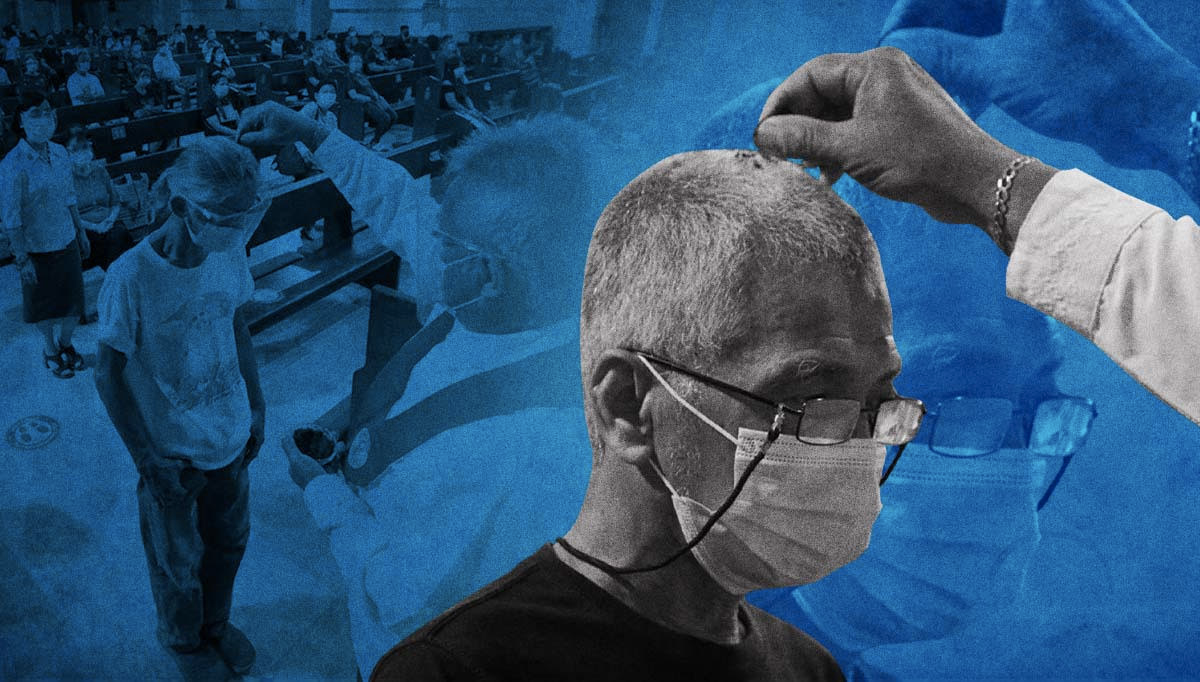 MANILA, Philippines––Ash crosses were received by Catholics on Wednesday (March 2) as they were invited by the Church to “repent and believe in the Gospel.”

Ash Wednesday, the catholic.org said, is one of the most significant liturgical days as it marks the dawn of Lent, a 40-day season of prayer and fasting.

This day, Rev. Fr. Oliver Par, SSP said, is a day of healing––the gift of a compassionate God. He said, to receive this gift of healing, “we need to recognize our need for it.”

He stressed that “we have to lay bare our weaknesses and strip our hearts of pride,” saying that while “arrogance will never limit God’s mercy, it can worsen the wounds that our sins inflict on us.”

This was the reason that when one receives the ash, he or she should let this “catch the eyes of our minds, so that as we close our eyes, God may speak to us heart to heart.” 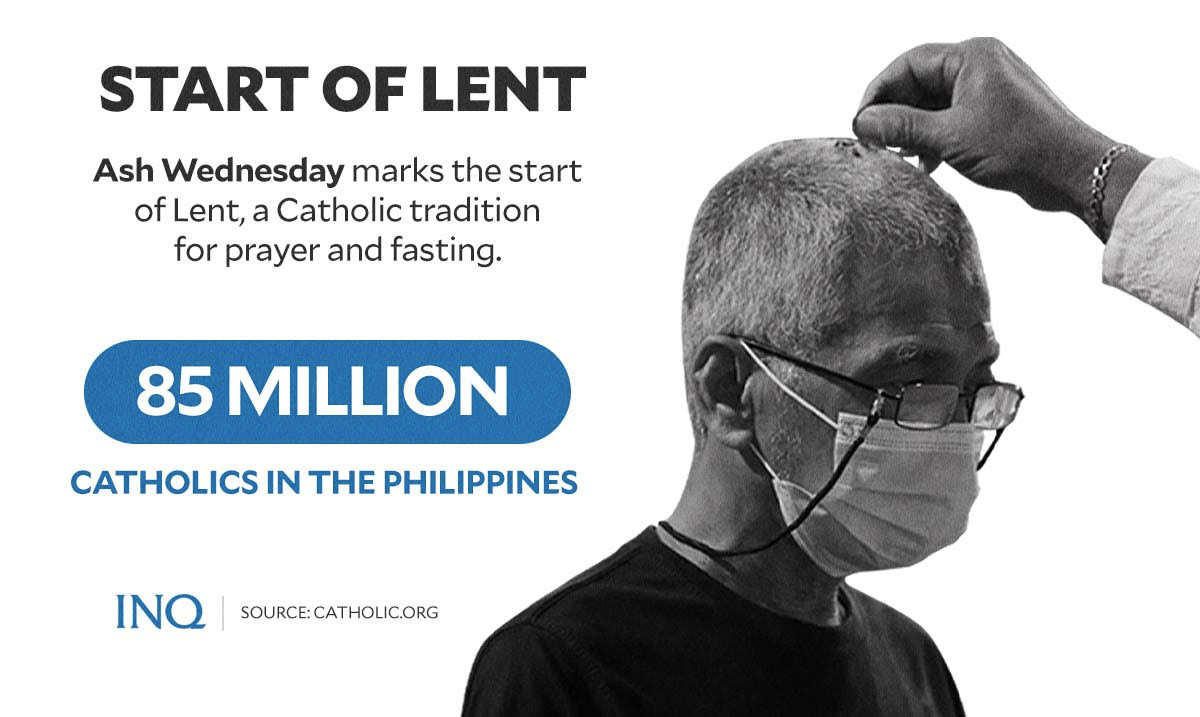 Since the Philippines is considered as the stronghold of Catholicism in Asia with 85 million Catholics, Lent has always been celebrated with reverence and sacrifices.

Here’s a glimpse of how the Philippines celebrates Lent, the season which the catholic.org said is a chance to “sacrifice some of our precious possessions” and the “possessions which impede us to serve others.”

The Way of the Cross, while often prayed on Good Friday, is likewise prayed on all Fridays of Lent. It is a devotion which highlights Christ’s passion, death and resurrection.

The Most Holy Trinity Parish in Manila is one of the thousands of churches which still practices this and encouraging the faithful to find time to pray and reflect.

The Catholic Bishops’ Conference of the Philippines describes the “Pabasa ng Pasyong Mahal” as an “epic poem in stanzas of five lines of eight syllables” and is chanted in several tones.

Danilo Mendiola, a pastoral counselor, said in INQUIRER’s High Blood in 2015 that the “Pabasa ng Pasyong Mahal” could be held any day between the first Sunday of Lent and Good Friday.”

He said it is often carried out in village chapels or houses before a makeshift altar with the images of the saints, the Mater Dolorosa, Christ on the Cross, and even the Sto. Entierro, the image of the Dead Christ.

The Panay News said in 2015 that Capiz has a 70-year-old devotion to the Mater Dolorosa––on the sixth Friday of Lent, women wearing black dresses and veils pray the Rosary and the verses of the novena to the Our Lady of Sorrows.

The rest of the Philippines likewise celebrates Viernes Dolores, often with a procession of the image of Mary with a heart pierced with seven swords that signifies her seven sorrows.

GMA Network’s State of the Nation in 2013 said that in Taytay Rizal, every Fridays of Lent and Good Friday, the Cofradia de Anunciata washes the image of the Dead Christ.

While this is not recognized by the Church, it said there is nothing wrong. Rev. Fr. Francis Lucas said back then that what’s significant is the faith that they share with the Christ who sacrificed his life.

A stage or street play depicting the Passion of Christ, Senakulo, the catholicandcultures.org said, takes place in the Philippines, especially in the provinces of Bulacan, Rizal, and Pampanga.

It said the Senakulo highlights the “violence and brutality” of Christ’s persecutors. The “bloody reenactment” of Christ’s Passion can be seen in San Pedro Cutud in San Fernando, Pampanga.

The journal “Lenten Rites and Practices” by Liwayway Mendoza said on the sixth Sunday of Lent, the faithful celebrate Christ’s entry to Jerusalem with palaspas or “artistically woven” coconut leaves.

It imitates the palm and olive branches that were waved as Christ entered Jerusalem. Boys and girls in white dresses likewise shower the people with flowers as the palaspas are raised for blessing.

Lent, especially the days of the Holy Week, is celebrated with processions in the Philippines. Mendoza said that on Holy Monday and Holy Tuesday, the procession of the Way to Calvary takes place.

The main image is the Fallen Christ and is with the images of the saints who were present as Christ walked his way to death––St. Peter, the beloved St. John, the Three Marys, St. Veronica, Mary Magdalene, and the Our Lady of Sorrows.

While presently, the Visita Iglesia is held by visiting seven churches to pray the Way of the Cross on Maundy Thursday or Good Friday, Visita Iglesia was initially held as a way to revere the Blessed Sacrament in the Altar of Repose.

This tradition, which later grew as a kind of pilgrimage and meditation for the Holy Week, dates back to the 1500s and is considered as one of the most common, especially when remembering Christ’s Passion.

Mendoza said always certain of a large crowd on Good Friday is the Penitencia, a form of penance where masked participants subject their bodies to “beatings, lashings, and other forms of self-inflicted flagellation.”

These penitents, she said, are common in Manila and Rizal. The penitents, bare to the waist, with hooded faces and wearing a crown of leaves, begin with prayers at the cemetery where the initial wounds are inflicted.

This takes place after the Celebration of the Lord’s Passion and Veneration of the Cross on Good Friday––an image of the Dead Christ is placed in a glass casket and will traverse the town in the longest procession of the Holy Week.

Lent is a 40-day season of “prayer, fasting, abstinence, and other acts of penance,” the Diocese of Ilagan said, as it’s a chance to prepare to celebrate Christ’s resurrection on Easter. 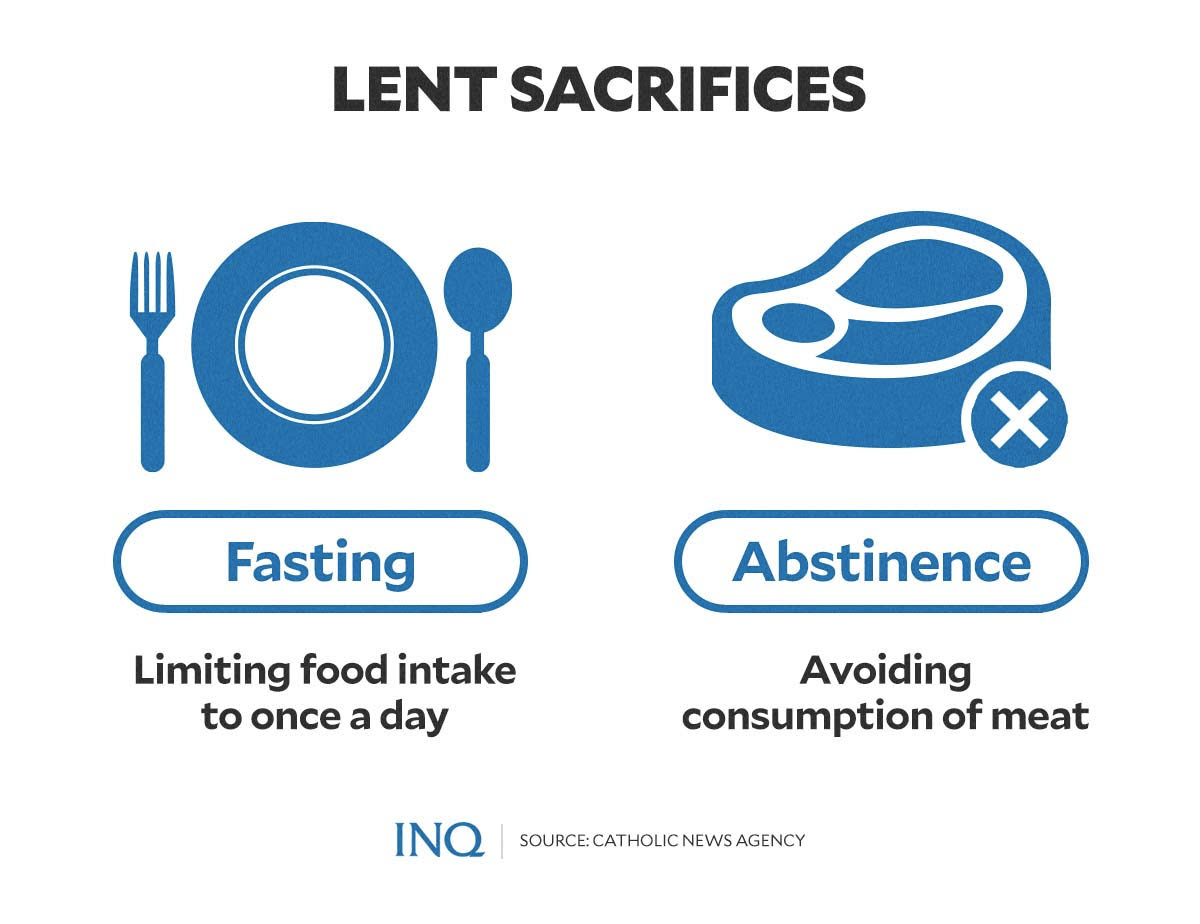 The United States Conference of Catholic Bishops said “we seek the Lord in prayer by reading Sacred Scripture; we serve by giving alms; and we practice self-control through fasting.”

Here are the things you need to know:

The Catholic News Agency (CNA) said fasting is the “act of doing with less.” Individuals who are 18 to 59 years old should fast on Ash Wednesday and Good Friday.

The sick are exempted from fasting. The CNA said pregnant women and even manual workers are excused from fasting, saying that the Church understands that some people are not able to commit to the Lenten fast.

The CNA said it is the act of “doing without.” Canon 1250 to 1253 states that Catholics over the age of 14 are expected to abstain from eating meat on Ash Wednesday and on all the Fridays of Lent.

“Catholics are also encouraged to undertake some sort of personal penance or abstinence. Examples include giving up sweets, a favorite TV show or not listening to the radio in the car on the way to work.”

It said that “giving up these things isn’t some sort of endurance test, but these acts are done to draw the faithful closer to Christ,” stressing that a person should commit time to prayer. 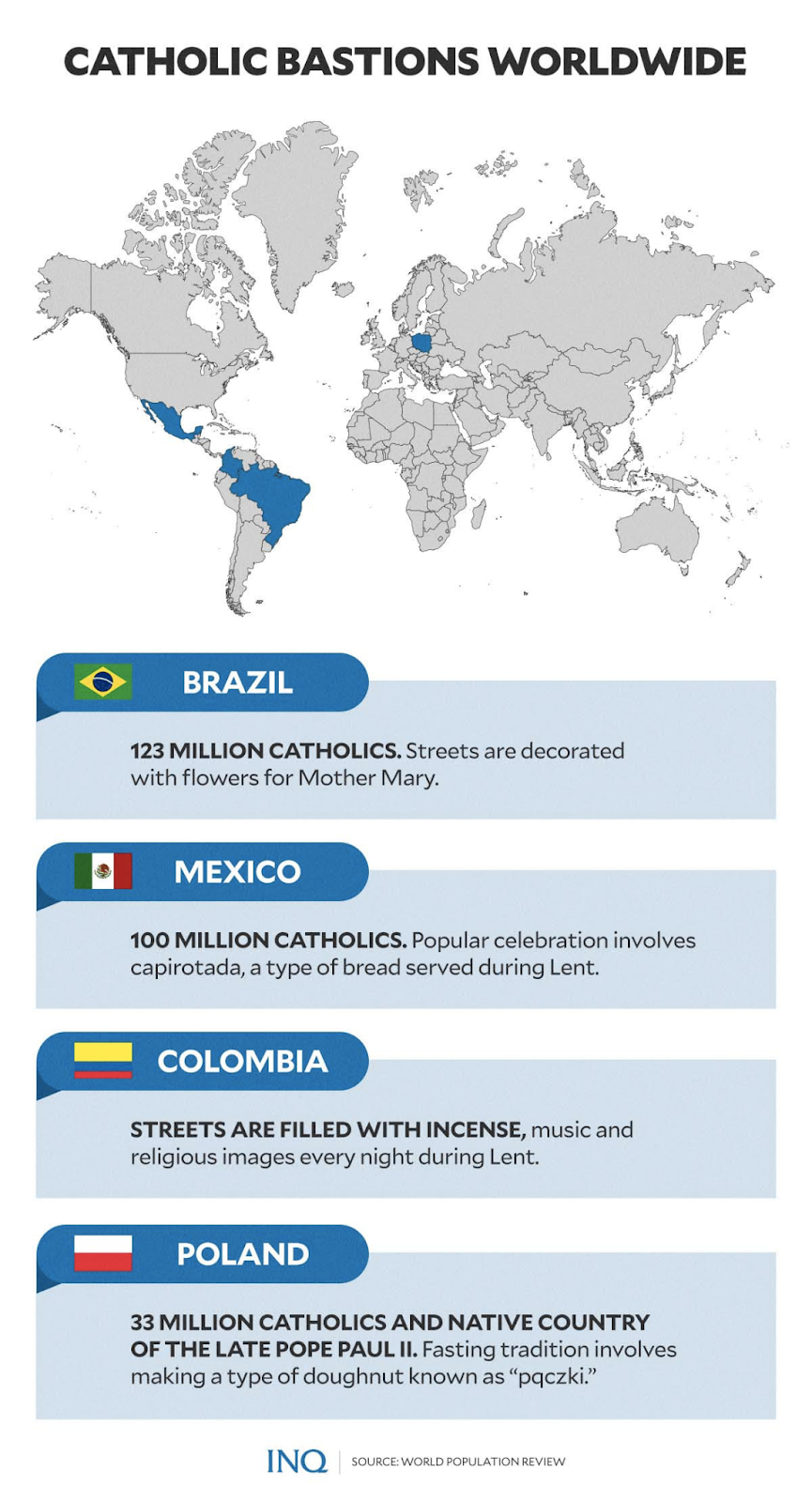 Elsewhere, Lent is celebrated in different ways in countries with high Catholic population.

Brazil is the stronghold of Catholicism in the world with 123,360,000 Catholics. Every Holy Week, Brazilians in Ouro Preto decorate the long street between the churches of Our Lady of the Pillar and the Immaculate Concepcion with colors, especially on the night of Holy Saturday.

The street, theculturetrip.com said, is lined with a carpet of brightly colored flowers, sand, and sawdust to create intricate patterns, a tradition that began in 1733. The children who are dressed in white stand while singing religious songs.

Mexico has 100,000,000 Catholics and mexicocity.com said Lent is a “peaceful and religious” season where Mexicans sacrifice watching TVs. It is also believed that meditation becomes more solemn when one refrains from smoking and consumption of alcohol.

Since Ash Wednesday and all the Fridays of Lent are days of abstinence, the faithful in Mexico observe “meatless Fridays”. Instead of meat, they eat bread which represents Christ’s Passion.

The capirotada, a kind of bread, is served for Lent. Its ingredients represent the Passion of Christ––the bread represents His body, the cloves on the bread are the nails on the cross, the syrup on the bread is the blood and melted cheese means the Shroud.

Every evening, from 8 p.m. to 11 p.m., the streets are filled with incense, music and giant religious images covered with flowers as the faithful light the way with candles. The 400-year-old tradition was added to the UNESCO list of Intangible World Heritage Sites in 2019. Colombia has 35,000,000 Catholics.

Poland has 33,037,017 Catholics. The Aleteia said the fast for Lent is “quite rigorous” and that in Poland, the use of sugar, eggs and fruit were forbidden, so prior to Lent, these items had to be thrown away or consumed.

“Instead of tossing everything to the dogs, someone decided that many of the forbidden ingredients could be mixed together to create a type of doughnut, now called a pączki.”

The Aleteia said this tradition coincided with a general spring cleaning, emptying out the house and preparing the home (and heart) for the prayerful season of Lent: “It was a way to end the celebratory season after Christmas and look forward to the solemn spiritual exercises that lie ahead.”