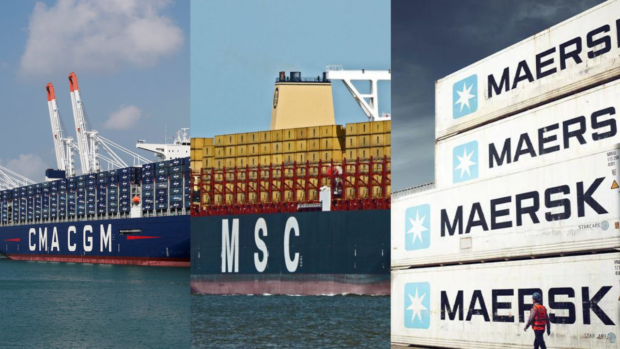 PARIS — The three biggest container shipping groups in the world announced Tuesday that they were suspending non-essential deliveries to Russia, adding to the country’s economic isolation following a raft of sanctions by the West.

Danish shipping giant Maersk, Switzerland-based MSC and France’s CMA CGM all announced that they would no longer take bookings for goods from Russia and were suspending most deliveries in the wake of Moscow’s invasion of Ukraine.

Citing the impact of sanctions, “bookings to and from Russia will be temporarily suspended, with exception of foodstuffs, medical and humanitarian supplies”, Maersk said in a statement.

MSC announced similar measures, saying it would “continue to accept and screen bookings for delivery of essential goods”.

CMA CGM said its “utmost priorities remain to protect our employees and ensure as much as possible the continuity of your supply chain”.

“In the interest of safety, the group has decided to suspend all bookings to and from Russia as of today and until further notice,” it said in a statement posted on its website.

MSC recently became the biggest shipper in the world by capacity, followed closely by Maersk, according to data from intelligence provider Alphaliner, with both companies accounting for around 17 percent each of global container shipping.

MSC is the third biggest, with a share of 12.6 percent, according to Alphaliner.

Smaller competitors such as Singapore-headquartered Ocean Network Express and Germany’s Hapag Lloyd have also announced an end to non-essential deliveries.

Container shipping companies carry the bulk of the world’s manufactured goods, making them a vital part of the global trade system.

Russia’s economy is reeling from the effect of successive waves of sanctions announced by Western countries, led by the United States and the European Union, targeting the country’s banks, foreign reserves and oligarchs.

The aim of the sanctions is to “isolate Russia politically, financially and economically”, Germany’s finance minister Christian Lindner said Tuesday.

The measures have “already had a massive impact on capital markets and the currency”, he said after a meeting with counterparts from the G7 club of wealthy nations.

Russian authorities have announced a slew of measures designed to stem the fall of the ruble and the broader financial markets, including banning money transfers abroad, and closing the Moscow Stock Market.

The ruble has dropped by about 35 percent since last week when Vladimir Putin launched the invasion.