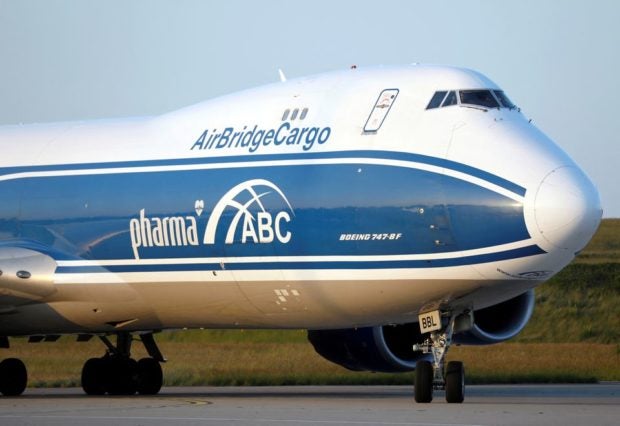 An AirBridgeCargo Airlines Boeing 747-87U arrives at Paris Charles de Gaulle airport in Roissy-en-France carrying 21-million face masks during the outbreak of the coronavirus disease (COVID-19) in France May 25, 2020. REUTERS FILE PHOTO

Transport between Europe and north Asian destinations like Japan, South Korea and China has become particularly problematic due to reciprocal airspace bans that bar European carriers from flying over Siberia and Russia airlines from flying to Europe.

Airlines responsible for moving around 20% of the world’s air cargo are affected by those bans, Frederic Horst, managing director of Cargo Facts Consulting, told Reuters on Tuesday.

Pure cargo carriers like Russia’s AirBridgeCargo Airlines and Luxembourg’s Cargolux are also subject to the airspace bans, in a move that could send air freight rates – already elevated due to a lack of passenger capacity during the pandemic – soaring further.

In December, air cargo rates were 150% above 2019 levels, according to the International Air Transport Association (IATA), adding to inflation affecting industries and economies around the world.

Sanctions imposed on Russia in the wake of its invasion of Ukraine are expected to further disrupt global supply chains.

Russia’s AirBridgeCargo alone moves just under 4% of global international air cargo, with most of that between Europe and Asia, Horst said.

“All up you could be looking at perhaps a quarter of air cargo between Asia and Europe needing to find alternate means of transportation,” Horst said.

“Yields are high enough that flying a longer route via Southeast Asia, South Asia or the Middle East is an option, but it will still pull capacity out of the market.”

Demand for air cargo last year was 6.9% above 2019’s pre-pandemic levels, according to IATA, as e-commerce surged during the pandemic and shipping container shortages and port bottlenecks led to more products being flown by air. In December, air cargo rates were 150% above 2019 levels, IATA said.

Taiwan’s EVA Airways (2618.TW) said on Tuesday its cargo flights to and from Europe were operating normally and it would consider adding more services to meet market demand. China Airlines , also based in Taiwan, said it would continue to pay attention to the global economic and political situation and flexibly adjust cargo capacity.

Asia-North America cargo routes are expected to be less affected than European routes, analysts say, because many carriers already use Anchorage, Alaska as a cargo hub and stopover point.

Japanese automakers Toyota Motor Corp (7203.T) and Nissan Motor Co said on Tuesday they were keeping an eye on any disruption to supply chains as a result of what Russia calls its “special operation” in Ukraine.

Read Next
Why it matters: How Putin’s invasion of Ukraine could impact PH
EDITORS' PICK
What to watch out for when selecting a video surveillance solution
Heads may roll at BOC, says Palace if sugar smugglers are allowed to use recycled import permits
vivo brings to the Philippines a powerful smartphone with a slimmer body, the vivo Y02s for only PHP 6,499
Palace: Biggest supermarkets in PH commit to sell sugar at P70 per kilo
DOH reports increase in daily COVID-19 deaths, mostly unvaxxed
House energy committee chair Arroyo bats for cheap electricity
MOST READ
DepEd to give teachers P5K cash allowance within first week of classes
Brian Poe-Llamanzares receives his PhD in Public Administration
LPA east of Luzon may intensify into tropical cyclone
GSIS cool to idea of lowering retirement age in PH
Don't miss out on the latest news and information.