Ukraine invasion: what are the legal implications? 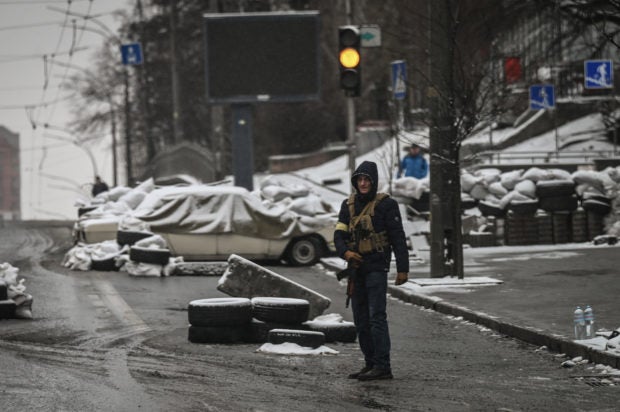 An armed man stands at a road block in downtown Kyiv on March 1, 2022. AFP

THE HAGUE — Kyiv has filed an application before the UN’s top International Court of Justice at The Hague, accusing Russia of “planning acts of genocide” in Ukraine as the invasion reaches a sixth day.

The ICJ said Tuesday it would hold genocide hearings on March 7 and 8 over the war in Ukraine, as fighting intensifies.

More than 660,000 people have already fled abroad, according to the UN refugee agency, which estimates that a million people are displaced within ex-Soviet Ukraine.

At the International Criminal Court, also in The Hague, chief prosecutor Karim Khan has launched an investigation, saying: “There is a reasonable basis to believe that both alleged war crimes and crimes against humanity have been committed.”

Yes. Russia has broken article 2(4) of the UN Charter, which forbids the use of force internationally, said Geoff Gordon, senior researcher at the Hague-based Asser Institute for International and European Law.

“The use of Russian military force is not unfamiliar” in Ukraine, added British-based international law professor Philippe Sands.

“One of the differences between before and today is that rules exist to protect us from such actions, reflected in the Charter of the United Nations, the closest thing we have to an international constitution,” Sands wrote in the Financial Times.

“It is the Charter’s most significant commitments that Mr. Putin has shredded,” said Sands.

Which courts can try Ukraine-related cases?

Ukraine has applied to bring a case to the ICJ, which certainly will hear arguments over jurisdiction, said Gordon.

National courts may also try cases related to the violation of international law, he added.

Russia may also be brought before the European Court of Human Rights for human rights violations.

The International Criminal Court is empowered to investigate war crimes committed by individuals on the territory of the Ukraine.

Ukraine is not a member, but in 2014 accepted the jurisdiction of the Court.

Russia, however withdrew from the ICC, so the court will only be able to reach Russians if they are arrested on the territory of a state that respects the jurisdiction of the court.

Can individuals be held accountable?

Yes. The ICC prosecutes individuals accused of the world’s worst crimes including genocide, war crimes and crimes against humanity.

Individuals could also be tried in national courts.

However, not even the ICC can prosecute the crime of aggression — the attack of one state on another planned by a political or military leader — if that country did not ratify the court’s Rome Statute, which neither Russia nor Ukraine has done.

Sands however suggested setting up a dedicated international criminal tribunal focusing on Russian crimes of aggression in regards to Ukraine.

The Hague-based ICJ — which rules in disputes between countries — will first hold public hearings on the genocide allegations in early March.

“The hearings will be devoted to the request for the indication of provisional measures submitted by Ukraine,” the court said on Tuesday.

At the ICC, should its judges agree the court has jurisdiction and evidence in support, an investigation could lead to chief prosecutor Khan issuing indictments and prosecution.

However, the ICC process could be speeded up should a member state refer the case to the court, thereby bypassing the need to obtain the judges’ permission.

What effect will it have?

Experts agree the question is difficult to answer.

The ICJ, whose decisions are final and cannot be appealed “lacks a classic enforcement mechanism to make its judgments effective”, said Gordon.

Similarly, the ICC does not have its own police force and relies on member states to make arrests.

“On the other hand, we are seeing the mobilisation of a number of more or less coordinated mechanisms designed to punish Russia for waging an illegal war,” Gordon said.

This included economic sanctions, travel restrictions, and the cancellation of sporting events.

“A judgment by the ICJ might play a role in any such actions in the future, whether as part of a specific legal argument or a public argument about legitimacy,” said Gordon.