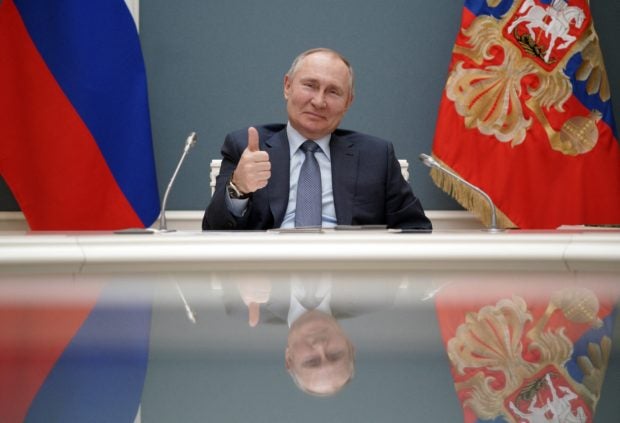 Russian President Vladimir Putin participates via video link in a ceremony to launch the construction of a third reactor of the Turkish nuclear power plant built by Russia’s energy giant Rosatom, in Moscow on March 10, 2021. AFP FILE PHOTO

PARIS — President Vladimir Putin’s order to place Russia’s strategic forces on high alert has served as a stark reminder that he commands what experts agree is the world’s biggest nuclear arsenal.

Here is a snapshot of Russia’s nuclear capabilities, and how a strike might be launched.

Russia owns the greatest number of nuclear warheads of any country, although the United States has more deployed, or immediately usable, warheads.

The SIPRI peace research institute in Stockholm has counted 6,255 Russian warheads against 5,550 for the US. China follows far behind with 350 and France with 290.

These figures, although widely accepted, are nevertheless estimates, notably because not all nuclear-capable weapons systems actually carry nuclear warheads.

According to the Nobel peace prize-winning International Campaign to Abolish Nuclear Weapons (ICAN), Russia spent $8.0 billion in 2020 on the building and maintenance of its nuclear arsenal.

The Russian constitution gives the president control over nuclear weapons, but the transmission of any order to use them, and the authentification of that order, also involve the defence minister and the armed forces’ chief-of-staff.

How such a scenario would play out exactly “we don’t know”, said Pavel Podvig, a Russian independent military expert.

The two subordinates have “no right to veto, but there is still some kind of deliberation process,” he said, adding: “It’s not like there is a button on the president’s table, there is a procedure.”

Even if a nuclear strike order should come down, there is still the question of whether the armed forces would comply.

“They are not mad and they are not sectarians,” said Pavel Luzin, a Russian military expert based in Moscow at Riddle, a think tank.

Many Russian government officials may well agree with western analysts who say that Russia would have much more to lose than to gain if it unleashed nuclear war.

“I personally don’t think the Russian military elite will cheer at the idea of limited nuclear use in or about Ukraine,” tweeted Kristin Ven Bruusgaard at Stanford University’s Center for International Security and Cooperation.

8/ I wonder about reports of elite mumblings and resort to old skool Kremlinology when seeing the face of Shoigu in recent displays. I personally don’t think the Russian military elite will cheer on the idea of limited nuclear use in or about Ukraine.

“But who will break the news to Putin that this may in fact not work?”, she added.

Putin in 2020 adopted a doctrine for the possible use of nuclear weapons, experts Hans Kristensen and Matt Korda recalled in last week’s issue of the “Bulletin of the Atomic Scientists”.

According to the doctrine, there are four acceptable justifications for going nuclear: A ballistic missile attack against Russia or an ally, the use of a nuclear weapon by an enemy, an attack on a Russian nuclear weapons site, or any attack threatening the existence of the state.

They quoted Putin as saying that Russia — which claims it has modernised close to 90 percent of its nuclear arsenal — could never allow itself to “stand idle” in the face of potential enemies.

“You stop for one second and you start falling behind immediately,” they quoted Putin as saying.

They added that Russian thinking may already have gone beyond the published doctrine.

“For example, officials explicitly threatened to use nuclear weapons against ballistic missile defense facilities, and in regional scenarios that do not threaten Russia’s survival or involve attacks with weapons of mass destruction,” they said.

“The real doctrine,” they added, “goes beyond basic deterrence and toward regional war fighting strategies, or even weapons aimed at causing terror.”