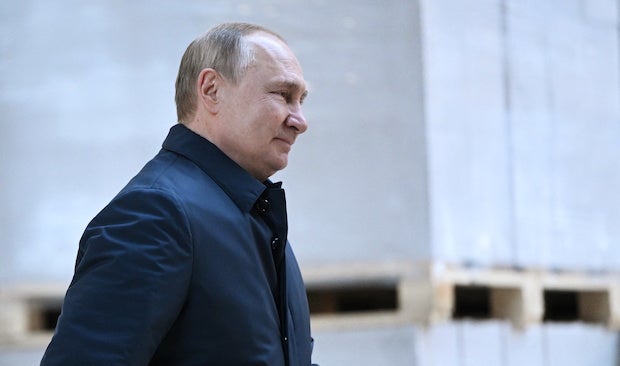 Russian President Vladimir Putin visits the construction site of the National Space Agency on the premises of the Khrunichev State Research and Production Space Center, in Moscow, Russia Feb. 27, 2022. (Sputnik/Sergey Guneev/Kremlin via REUTERS)

MOSCOW — The websites of several Russian media outlets were hacked on Monday, Reuters checks showed, with their regular sites replaced by an anti-war message and calls to stop President Vladimir Putin’s invasion of Ukraine.

“Dear citizens. We urge you to stop this madness, do not send your sons and husbands to certain death,” the message read. “Putin is forcing us to lie and is putting us in danger.”

The website of Russian state news agency TASS, along with news websites rbc.ru, kommersant.ru, fontanka.ru and iz.ru of the Izvestia outlet all suffered outages, with several displaying the message.

Russia says its forces have intervened in Ukraine in a “special military operation” to demilitarise the country. The state communications regulator has warned local media outlets and foreign tech firms against what it says are false depictions of Russia’s activities in materials published online.

“We have been isolated from the whole world, they have stopped buying oil and gas. In a few years we will be living like North Korea,” the message continued. “What is this for? So that Putin can get into the history books? It’s not our war, let’s stop him!”

Some Russian media said Anonymous, the amorphous online activist community that first grabbed global attention about a decade ago, was responsible for the hack.