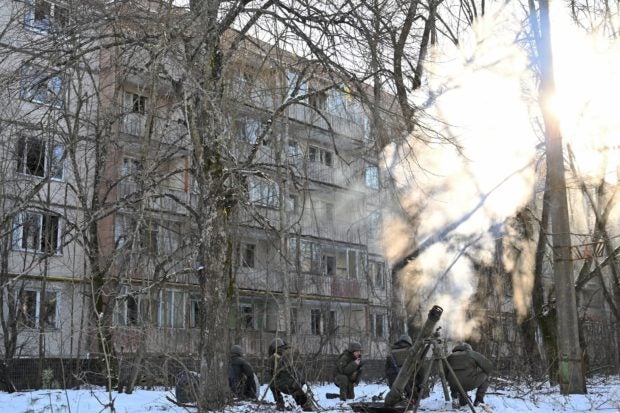 In this file photo taken on February 04, 2022 Servicemen take part in a joint tactical and special exercises of the Ukrainian Ministry of Internal Affairs, the Ukrainian National Guard and Ministry Emergency in a ghost city of Pripyat, near Chernobyl Nuclear Power Plant. AFP

MOSCOW — The Russian military on Saturday released images of the Chernobyl nuclear plant in Ukraine that it seized after President Vladimir Putin launched an invasion of the country this week.

Russian troops took control of the area — one of the most radioactive places on earth — on the first day of their offensive into Ukraine.

Images released by Moscow’s defense ministry showed Russian soldiers patrolling the plant, which is encased in a giant sarcophagus, with snipers dressed in black uniforms and a tank parked on the territory.

A masked soldier said radiation levels were “under control”.

The soldier claimed the Russians were protecting the area “with the Ukrainian National Guard”, but Ukrainian authorities have said staff had been evacuated as Moscow’s forces took control.

Ukraine on Friday said the radiation levels had increased since Chernobyl — which lies on the path of the Russian advance from Belarus to the capital Kyiv — was seized by Moscow’s troops.

Ukrainian authorities said they had informed the UN’s International Atomic Energy Agency (IAEA) that they had lost control of highly radioactive fuel rods from the power plant.

The UN’s nuclear watchdog said the radiation levels “posed no danger” and that Ukrainian regulators suspected the uptick could have been caused by heavy military vehicles stirring up contaminated soil.

The explosion in the fourth reactor at the nuclear power plant in April 1986 left swathes of Ukraine and neighbouring Belarus badly contaminated and led to the creation of an exclusion zone roughly the size of Luxembourg.

The release of the footage Saturday appeared part of the Kremlin’s major propaganda campaign at home downplaying the ferocity of the bloody attack on Ukraine.

Authorities have simultaneously cracked down on protesters taking to the streets to protest the war, arresting over 2,000 demonstrators.

The risk of nuclear disaster in Ukraine