Still no presidential endorsement from Duterte: ‘I’d like to stay neutral’ 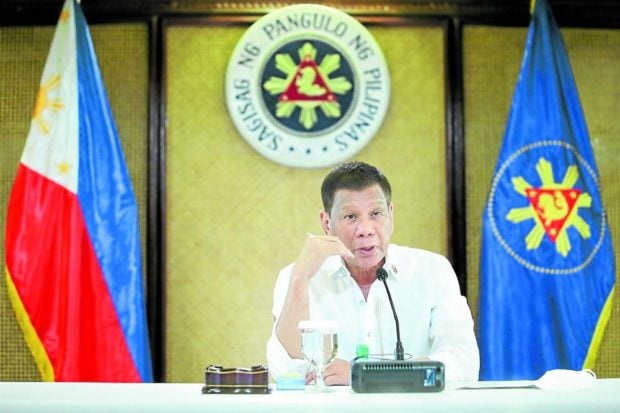 President Rodrigo Roa Duterte talks to the people after holding a meeting with the Inter-Agency Task Force on the Emerging Infectious Diseases (IATF-EID) core members at the Malacaٌan Palace on January 6, 2022. ROBINSON NIرAL/ PRESIDENTIAL PHOTO

MANILA, Philippines — Nearly a month into the campaign, President Rodrigo Duterte on Thursday remained firm in his stance not to endorse any candidate for president for now, saying he prefers to “stay neutral.”

In an interview with Presidential Communications Office Secretary Martin Andanar, Duterte reiterated his previous remark that he will only endorse a candidate if “there would be a compelling reason.”

“Kung may i-eendorse ako, I may or may not—but preferably I’d like to stay neutral,” he said.

“Ibig sabihin wala akong susuportahan na kandidato unless—again having said it and I’ll say it again—there would be a compelling reason for me to go out and tell the people what it is. I’d like to bide my time,” he added.

According to Duterte, there is nobody in his mind at this time to merit his endorsement as his worthy successor to Malacañang.

“However little that it may look for some people but in reality, it is really the interest of the people which is at stake, ‘yun mapipilitan ako maglabas. Then maybe, just maybe, I will choose a candidate to support,” Duterte said.

“Until now, I have yet to decide whether or not to support a candidate. At this time, nobody’s in my mind actually,” he further said.

This was not the first time that Duterte said he is not endorsing any presidential candidate—at least for now.

The president earlier said that all of those running for the presidency were qualified to do so. But in another public address, Duterte also threatened to expose the faults of presidential aspirants.

Duterte earlier supported the presidential bid of Sen. Christopher Go, but the latter later withdrew from the race.