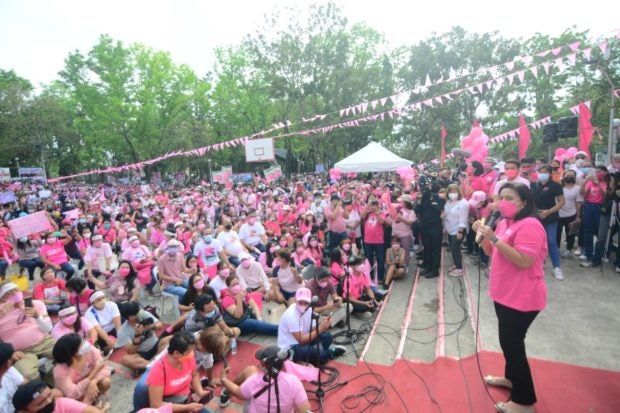 Vice President Leni Robredo leads a mini-rally in Oton town in Iloilo to kick off her sorties in the city and province. (Photo by Ian Paul Cordero)

The mainly youthful crowd repeatedly shouting “Leni, Leni” at the Iloilo Sports Complex in Lapaz District is one of the biggest rallies held here.

“This must be the biggest rally in the Philippines so far,” Sen. Richard “Dick” Gordon, one of the senatorial candidates under the slate Robredo and Pangilinan, told the boisterous crowd.

The crowd filled the 8,000 capacity bleacher area and packed the football field spilling to the track and field oval and adjoining areas.

The sports complex was already filled with mostly pink-clad supporters of Robredo and running mate Sen. Francis “Kiko” Pangilinan hours before the program started around 5 p.m.

The complex was transformed into a sea of pink with pink balloons, flaglets, posters and streamers even as Robredo and Pangilinan were still holding mini-rallies in six towns and a city before proceeding grand rally.

Robredo kicks off sorties in her bailiwick Iloilo