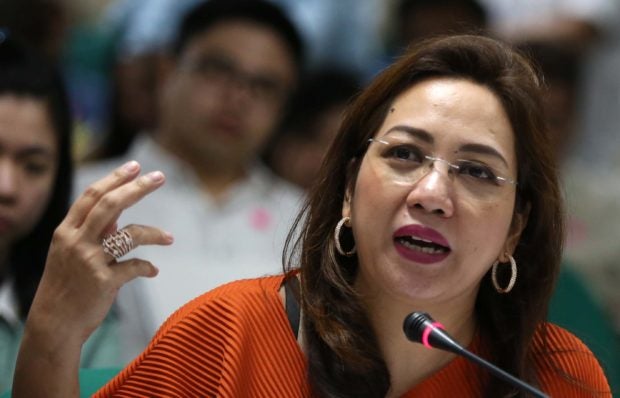 MANILA, Philippines — Iloilo Representative and former Health Secretary Janette Garin, who served under the administration of late president Benigno Aquino III, said Thursday she is backing the Marcos-Duterte tandem in the May 9 elections.

Garin, formerly with the Liberal Party, said she believes in Ferdinand “Bongbong” Marcos Jr. and Inday Sara Duterte-Carpio’s message of unity, especially after the recent controversy regarding the location of the tandem’s rally in Guimbal town in Iloilo province.

The Marcos-Duterte tandem was supposed to hold a rally at the “Guimbal Stadium” on Thursday afternoon but was cancelled after some netizens and a local media station in Iloilo pointed out that the supposed stadium was located at the grounds of Guimbal National High School.

The Department of Education (DepEd) prohibits the use of its property for electioneering. The rally was organized by Garin’s husband, who chairs the Lakas-CMD party in Iloilo province.

While Garin insisted that the venue was a private property, she said the controversy stirred disagreements among locals.

Garin claimed that in light of the controversy, the principal of the school as well as its teachers were being threatened by supporters of other presidential candidates.

“It took me long to decide, but I am supporting the BBM-Sara tandem because I believe in their call for unity. I believe that there is very great motivation in Bongbong Marcos to deliver to the people because he wants to disprove the allegations against him,” she added.

Garin was a part of Liberal Party, the political party of presidential candidate Leni Robredo, before joining the Nationalist Party.