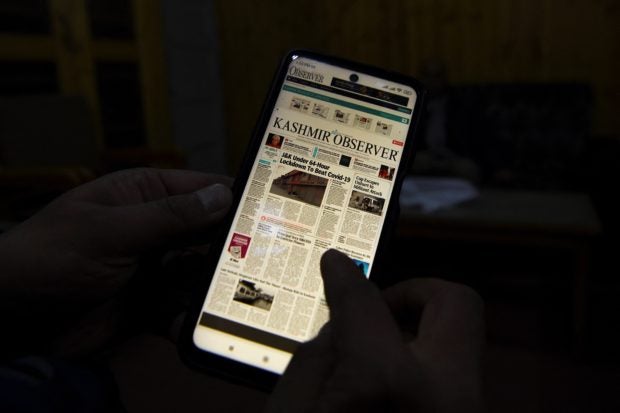 In this photo illustration taken on January 29, 2022, a man scrolls through an online version of local news publication Kashmir Observer in Srinagar. AFP

SRINAGAR — One of the most comprehensive NGO reports on decades of violence and killings in Indian-administered Kashmir is Alleged Perpetrators, published by the most respected rights group in the disputed region.

But clicking on the Greater Kashmir newspaper report it cites in the killing of a 16-year-old named Ishtiyaq Ahmad Khanday and two other people now generates a “404 Oops… Page not found!” error.

For Sajad Ahmad Dar, who died in hospital after being in police custody in 2012, the Kashmir Reader link says: “Sorry the page you were looking is not here.”

And for Ghulam Mohi-ud-Din Malik, shot 19 times when paramilitaries searched his house, the My Kashmir page reads simply: “Forbidden. You don’t have permission to access this resource.”

And so on, over and over again.

In recent months hundreds of reports chronicling decades of violence in the disputed Muslim-majority territory have disappeared from local media archives or been rendered unsearchable through a variety of methods.

Critics say it is an Orwellian effort to expunge history and control the narrative going forward, with most pointing the finger at the Indian government.

In many cases, newspaper reports are the only publicly-accessible primary-source records of events in Kashmir.

“There are reasons to believe — though these are just suspicions — that somebody from the state could be complicit in this,” she said.

Control of Kashmir has been contested between India and Pakistan since independence in 1947, and the nuclear-armed neighbors have fought two of their three wars over the territory.

India has at least half a million soldiers permanently deployed on its side of the frontier, fighting a long-running insurgency that has claimed tens of thousands of lives since 1989. Delhi accuses Pakistan of backing the militants, which Islamabad denies.

Tensions intensified in 2019 after New Delhi rescinded the limited autonomy guaranteed to Kashmir under the Indian constitution and imposed direct rule, detained thousands of people including political leaders and activists in a huge security clampdown.

After connections were restored, journalists began noticing that swathes of reporting were missing from their publications’ websites.

Speaking on condition of anonymity for fear of reprisal, one editor in the main city of Srinagar told AFP that at first they thought it was a technical issue.

“But after a closer look into our online archives we realized that it was mostly of previous years of mass uprising and killings that were missing,” they said, in a pattern that made it seem “as if nothing had happened in Kashmir before 2019”.

Many of the vanished reports cover huge demonstrations against Indian rule in 2008, 2010 and 2016, when in total nearly 300 protesters were killed by government forces and thousands more injured, including women and children.

Historian Siddiq Wahid, the founding Vice Chancellor of the Islamic University of Science and Technology in Pulwama, called the purge a “diabolical” attempt to ensure “only one interpretation” of events was possible.

“Orwell’s depiction of surveillance that was done in ‘1984’ looks crude and primitive compared to what is happening today.”

India’s government spokesperson in Srinagar did not respond to repeated requests by AFP for comment on this story.

In the past Indian authorities have regularly dismissed rights groups’ accusations of abuse and UN reports as propaganda intended to defame government forces deployed in the territory.

Several media personnel, speaking on condition of anonymity due to the sensitivity of the subject, said authorities had pressured their publications into hiding past reporting on killings, rape and torture blamed on Indian security forces.

Another Srinagar newspaper editor said publishers had been coerced by authorities into hiding reporting on sensitive topics by scrubbing metadata from online stories.

Wiping it from archived content had made it near-impossible for readers to find news results on specific past incidents, the website manager told AFP.

“Even if all the old stories are there, it’s now impossible to search for them using keywords unless you remember a long paragraph with the exact sequencing of words and use it to get results from a search engine,” they explained.

That can cripple those who use newspaper reports in their own work.

The usually vocal Jammu Kashmir Coalition of Civil Society, the publisher of Alleged Perpetrators, declined to comment to AFP for this story.

Its activities have largely ceased since its program co-ordinator was arrested in November and its electronic and other records were seized in raids by India’s National Intelligence Agency.

Local journalists say it is not the first time independent media in the region have been sabotaged.

Sajjad Hyder, editor of the daily Kashmir Observer, said its website had been hit by mysterious cyberattacks during periods of large-scale protest — when international readership jumped.

They lost three to four years of data in 2008, subsequently moving to a more secure server and installing firewalls.

“There are attempts being made to restrict our reach and minimize our readership,” said Hyder. “It’s rather a major challenge for us now.”

Team members are copying articles from print versions to slowly fill the gaps in the online archive, but are experiencing unexplained restrictions on social media platforms, while they have been told the website is inaccessible from some locations.

Indian-administered Kashmir once enjoyed a vibrant press, with more than 250 newspapers published across the territory, although journalists and editors have for decades faced pressure from rebels as well as government agencies.

But editors say they have come under systematic pressure to tone down criticism of Delhi’s rule since the Hindu nationalist government of Narendra Modi abolished limited autonomy in 2019.

Lucrative government advertisements were stopped completely in many prominent newspapers — a tactic once used sparingly to express displeasure and press them to toe the government line.

Journalists have been arrested under anti-terrorism laws or repeatedly summoned by police for interrogation over their reportage, and authorities in December shut the independent Kashmir Press Club, which had criticised police harassment.

Many newspapers are now mostly filled with articles sourced from government handouts, badly affecting their credibility and circulation.

Michael Kugelman of the Washington-based Wilson Center said the vanishing archives appeared to be “part of an ongoing effort by New Delhi to control the narrative on Kashmir”.

India “has wanted to project a sense of normalcy that often doesn’t align with the reality on the ground in Kashmir,” he told AFP, adding the disappearing newspaper records should be seen as part of an “intensifying crackdown” on press freedom in the territory.

“None of this is good news.”

India locks down restive Kashmir after burial of separatist leader

India riled after big brands back Kashmir on social media