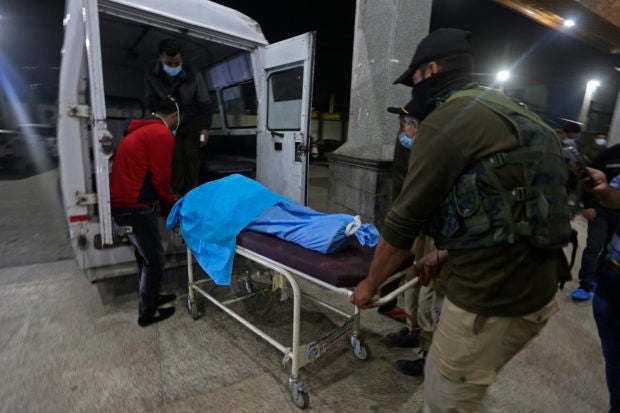 Indian police personnel carry the body of a street vendor who was shot dead by unidentified gunmen, at a hospital in Srinagar on October 16, 2021. AFP

SRINAGAR, India — Two laborers were killed by gunmen in Indian-administered Kashmir Sunday, police said, the latest victims of a fresh outbreak of violence that has sent jitters through the disputed Muslim-majority region.

The two laborers, who were Hindus from Bihar, a state outside the Himalayan territory, were shot in the southern Wanpoh area of Kashmir valley. A third was critically injured, police said.

The killings came a day after a street vendor and a laborer, also from Bihar, were killed in separate shootings. One was Muslim, the other was Hindu.

No group has immediately claimed responsibility for the four deaths, which have sent shockwaves through minority communities in the region.

Tensions have risen in Kashmir since August 2019 when Hindu-nationalist Prime Minister Narendra Modi’s government scrapped the region’s semi-autonomy and brought it under New Delhi’s direct rule.

This was accompanied by a huge security operation and communications blackout with tens of thousands of extra soldiers joining the estimated half a million already on the ground.

Modi said the change was to end decades of violence and bring prosperity to Kashmir.

But locals said the laws enacted since then favored Indians from outside the territory.

The latest killings come hard on the heels of a series of street shootings last week that left seven more civilians dead, among them three members of the local Hindu and Sikh communities.

Those shootings were claimed by The Resistance Front (TRF) rebel group, which accused them of working for India’s security agencies.

In total, 32 civilians have been shot dead this year so far, a majority of them local Muslims.

Meanwhile deadly clashes between insurgents and government forces have claimed roughly 30 lives — including soldiers and rebels — in the past two weeks.

Police said five TRF militants have been killed since last week, including two on Saturday.

Two soldiers died in a firefight near the ceasefire line between India- and Pakistan-controlled Kashmir on Saturday, the military said.

Kashmir was divided between India and Pakistan since their independence from British rule in 1947. The nuclear-armed rivals have fought two wars over its control.

An armed rebellion against Indian rule of Kashmir started in 1989 with groups demanding independence or merger of the region with Pakistan.

Tens of thousands of people, mostly civilians, have died in the fighting.

Pakistan denies India’s repeated accusations that it supports the rebels.