India locks down restive Kashmir after burial of separatist leader 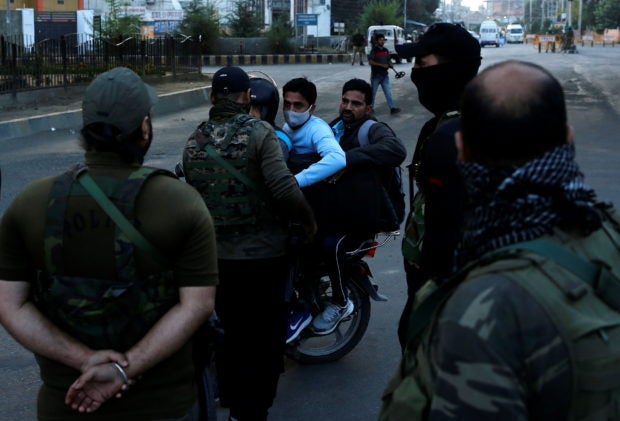 Indian security force personnel stop men riding a motorcycle at a barricade near the residence of Syed Ali Shah Geelani, a veteran separatist politician from Kashmir, after his death in Srinagar, September 2, 2021. REUTERS

SRINAGAR, India — Indian Kashmir veteran separatist politician Syed Ali Shah Geelani was laid to rest early on Thursday in Srinagar, as authorities blanketed the region with troops and clamped down on communications to prevent protests.

Geelani, 91, was buried in a graveyard near his home before dawn with only a few hundred people, including his family and neighbors, allowed to attend the funeral, a government official said.

“There was heavy security at the funeral, including plain clothes policemen,” the official said.

Geelani, who died on Wednesday, had been unwell for some time, his family said.

Among the most prominent political leaders in Kashmir – a Himalayan region claimed by both India and Pakistan in full, but ruled in parts – Geelani for years led an umbrella alliance of secessionists known as the Hurriyat Conference.

But the group split in 2003, when hardliners led by Geelani, who advocated Kashmir’s merger with Pakistan, walked out after moderates decided to hold talks with New Delhi. He was kept under house arrest more than a decade after leading several anti-India protests.

Around Geelani’s home and elsewhere in Srinagar, armed troops lined main roads and manned checkpoints, a Reuters witness said, as authorities sought to prevent protests in the wake of his passing.

The city’s main business area remained deserted, with most shops closed, and the movement of vehicles restricted, the witness said. Authorities also cut internet connections and mobile networks in the Kashmir valley since late on Wednesday.

The clamp down echoes restrictions that were imposed in August 2019 when Indian Prime Minister Narendra Modi split Jammu and Kashmir – then the country’s only Muslim majority state – into two federally-administered territories.

The shock move was opposed within Kashmir, including by the likes of Geelani who quit his hard line Hurriyat Conference faction, saying that it had failed to counter New Delhi’s efforts to tighten its grip on the disputed region.