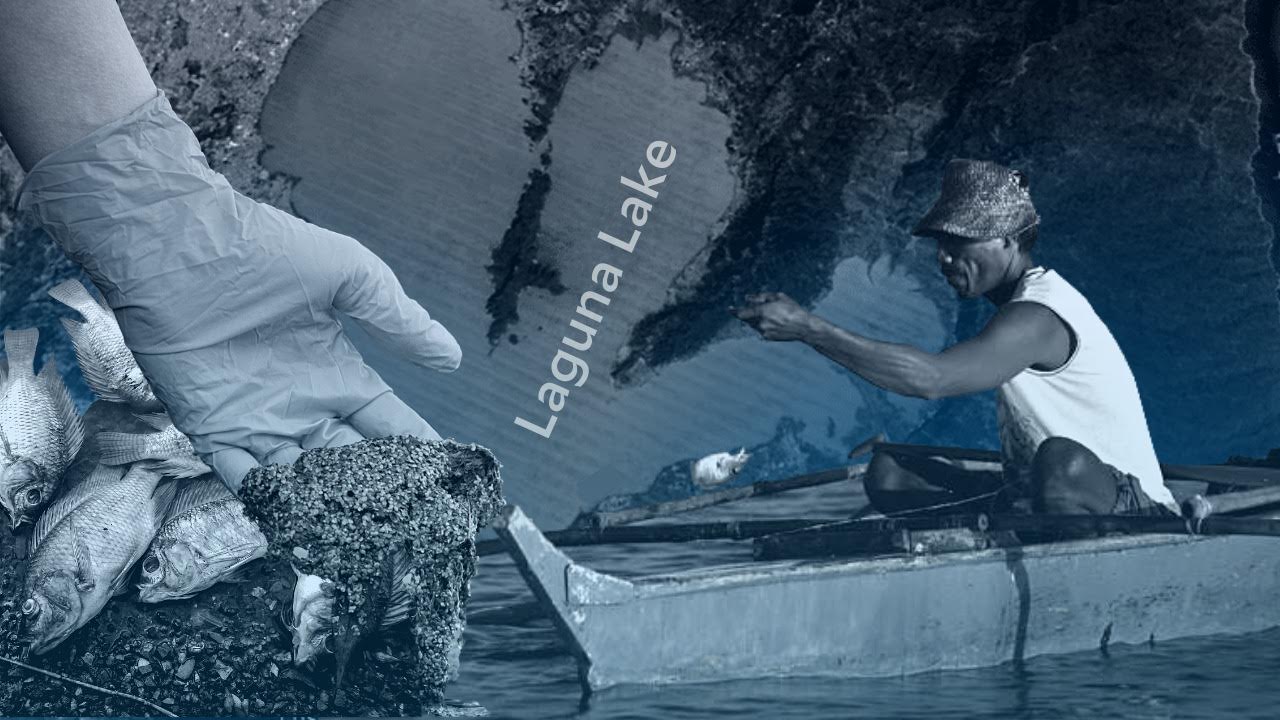 Based on criteria by the Department of Environment and Natural Resources (DENR), Laguna lake, as a Class C fresh surface water, is able to propagate and grow fish and other aquatic resources.

However, according to the Laguna Lake Development Authority (LLDA), many factors have been found to be harming and possibly killing the lake, including its rich biodiversity.

In this article, INQUIRER.net will detail the ecological status or condition of the lake, identify the culprits which could be damaging the lake’s waters, and detail some ideas raised by scientists and academics which could help rehabilitate the lake.

Unlike some of Laguna de Bay’s 21 tributaries—as well as Pasig River which connects the lake to Manila Bay—the lake continues to be able to meet the threshold for Class C waters.

“Unfortunately, most of the tributaries of Laguna lake were declared worse than Class C. Some were even worse than class D—including those that are located near Metro Manila. These tributaries are only fit for irrigation,” said Emiterio Hernandez, head of the Environmental Regulatory Department of the Laguna Lake Development Authority (LLDA), which oversees activities on the lake.

Still, studies have previously emphasized that maintaining the Class C fresh surface water status of Laguna Lake does not mean that the lake has very pristine waters.

As it turned out, issues previously listed by Hernandez, such as the propagation of water hyacinth or water lilies, algal bloom which often occurs during summer seasons, waters from the biologically declared dead Pasig River, and sediments deposited in the lake mostly during the rainy season—are just the tip of the iceberg. 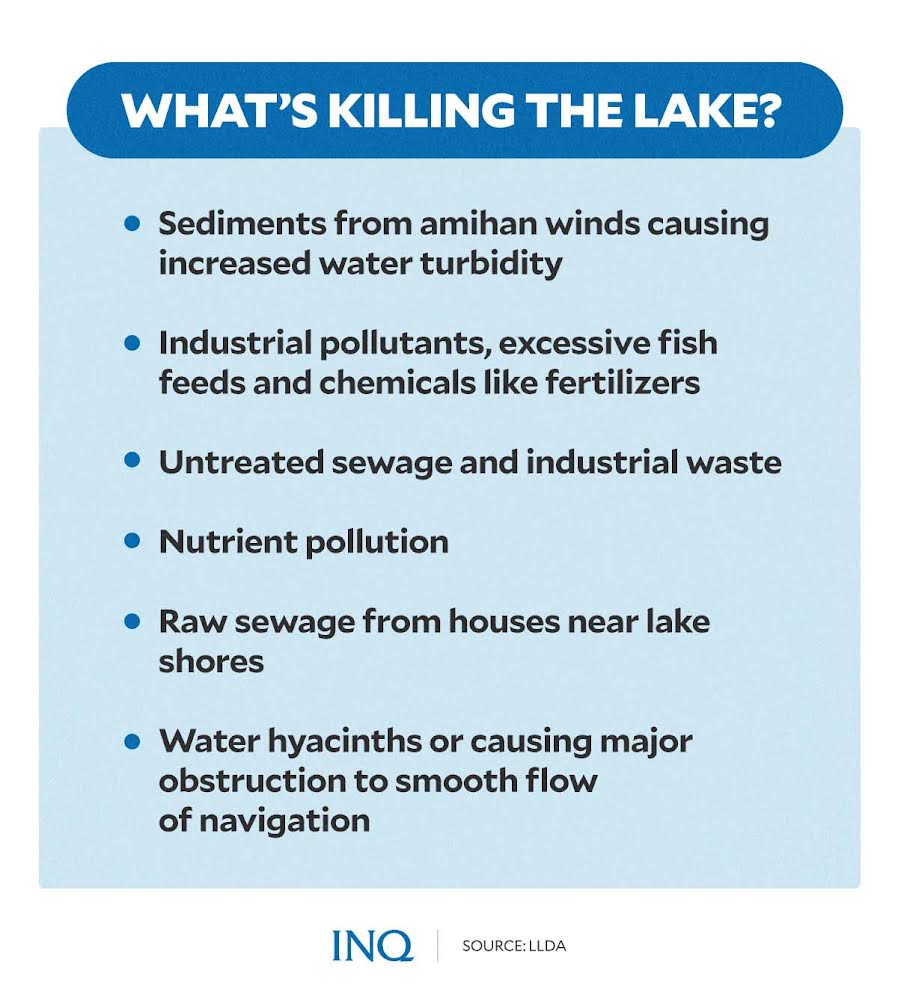 A study presented during the Japan Geoscience Union Meeting in 2012 stated that water quality in the country’s largest lake “has significantly deteriorated” due to several factors, like:

“The degradation of Laguna de Bay has been attributed to a host of factors; foremost of which is the intensification of economic activities within and around the lake,” a separate study noted.

Citing the LLDA, the 2020 study said that population, expansion, deforestation, urbanization, and industrialization—“which have resulted into intense land conversions”—have been threatening and impacting the lake’s water quality and ecology.

“The rapid decline of water quality in the lake is due to the increasing waste inputs from agricultural run-off and soil erosion, domestic sources, and industrial effluence,” the 2020 study stated.

The lake, which stretches from the province of Laguna to the south and Rizal to the north, was found to be surrounded by over 5,009 industrial and agricultural establishments—mostly located in the watershed areas.

According to the study’s researchers, these establishments, directly and indirectly, discharge waste products to Laguna Lake.

The degradation of the lake’s water quality, according to the study, “is believed to have led to low productivity that resulted in biodiversity loss, destruction of water habitats, increased sedimentation, and elevated levels of hazardous and toxic substances that pose biological health effects.”

Laguna Lake does not only suffer from a deteriorated water quality.

Studies have also pointed out that a combination of issues including pollution, siltation, perennial turbidity—among others—have caused Laguna Lake to have an extremely stressed ecosystem that is in need of rehabilitation.

According to LLDA, Laguna Lake is home to a variety of organisms, including 31 species of fish belonging to 16 families and 19 general. 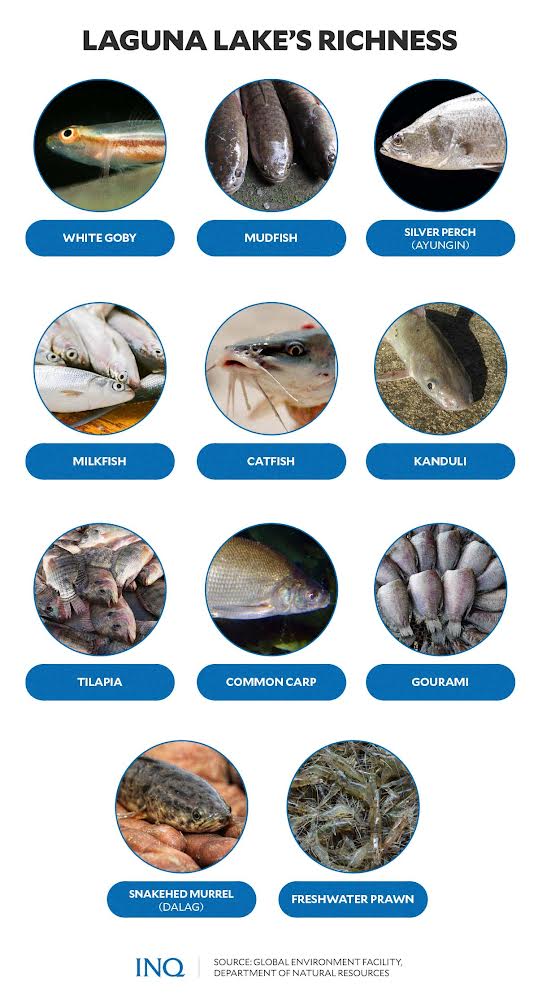 Different studies have also found that throughout the years, the lake’s zooplankton and phytoplankton community has also been affected by several factors—including the expanding fish pen industry in the lake, the operation of the hydraulic control structures (HCS), and lake pollution.

A study published in 2002 stated that ecological evidence points to the extremely disturbed state of Laguna Lake, as attested by plunging fish yields—which was already recorded in the early 1970s.

Pollution, siltation—or the settled fine sand, soil, or mud in the waters, perennial turbidity—persisting cloudy or murky waters, and the declining alkalinity of the water do not affect only fish yields.

The same study noted that the factors have contributed to the slowing down of fish maturation among fish breeds in the lake.

From the normal four to five months, fishes in Laguna lake were observed to have a maturation period that lasts for nine to 12 months.

Data from the LLDA bared that the lake currently can produce about 80,000 to 90,000 metric tons of fish per year. However, these figures could still be reduced.

Last year, tons of milkfish or tilapia were lost due to fish kill caused by overturn—locally referred to as “duong.” Overturn is a natural phenomenon usually during the cold months when the top and bottom water of the lake switch, thus reducing the amount of dissolved oxygen that fish need to survive.

“For the longest time, we cannot remove the sediment deposit. It has already affected the depth of the lake from more than three meters to on average 2 and a half meters because of sedimentation,” he said.

Studies found that sediments found in Laguna Lake were contaminated with heavy metals, which could harm different organisms in the lake, including fishes and freshwater snails.

In 1991, a study stated that traces of cadmium (Cd), lead (Pb), and zinc (Zn) were found in the lake, with a higher concentration of contamination in the west bay, compared to the east bay. 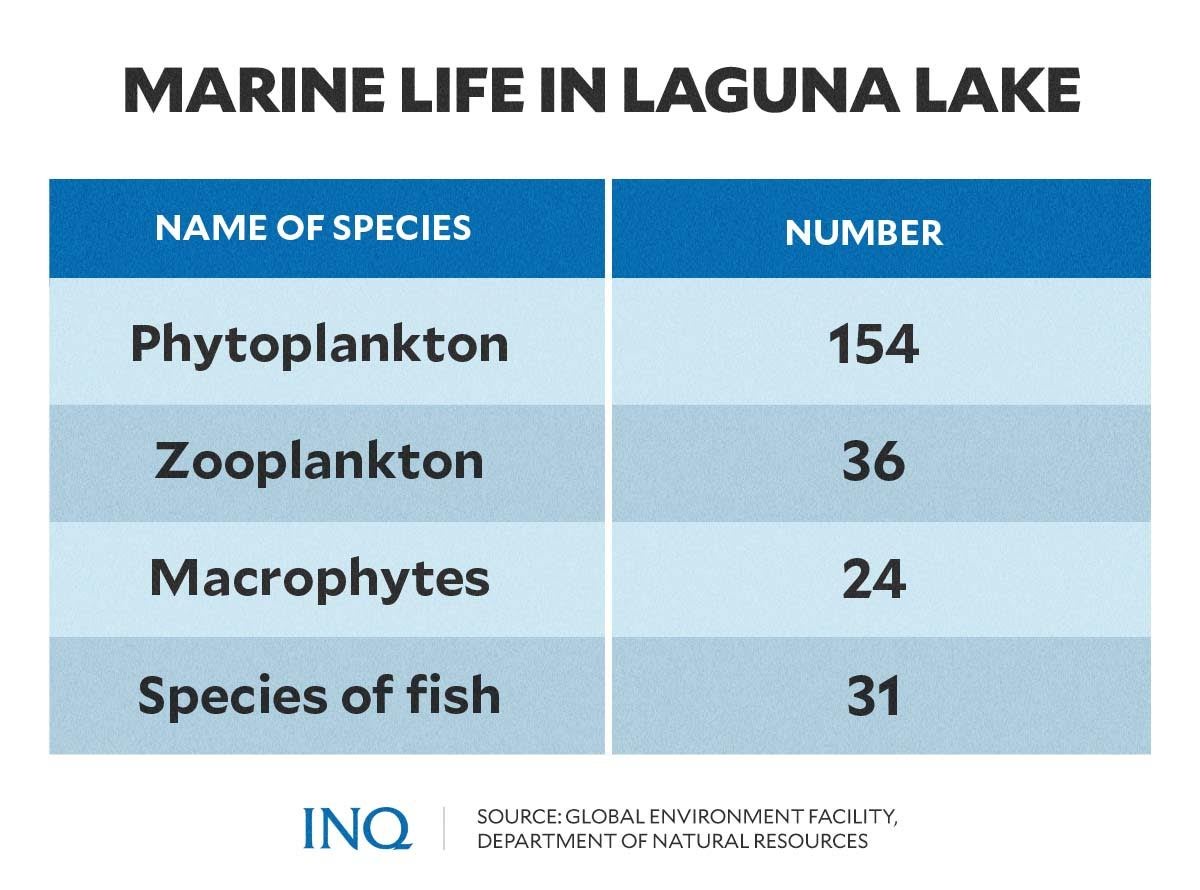 A 2005 study echoed the same findings, where Cd, Pb, and Zn were found to be higher in the lake’s west bay compared to the east bay. The same study also found higher levels of chromium (Cr) and nickel (Ni) in west bay.

“These findings reflect the significant variations across regions as the watershed of the west bay are categorized as a highly urbanized region where large-scale industrial activities are located,” a 2020 study published in the Mindanao Journal of Science and Technology explained.

“In contrast, the east bay watersheds are classified as suburban and agricultural regions,” it added.

The study discovered traces of arsenic (As) and other geothermally associated elements, which the scientists said could be due to the volcanic nature of Laguna lake.

It also emphasized that Laguna lake has a low to moderate level of contamination. Still, the heavy metals present in the waters could pose potential ecological risks and the “aquatic life thriving in the lake are already at very high risk.”

But how do these heavy metals really affect the lake and its rich biodiversity?

According to a 2021 study published in the Journal of Clinical Toxicology, heavy metals such as cadmium, chromium, nickel, arsenic, copper, mercury, lead, and zinc are the most common heavy metal pollutants which can cause “severe toxicity in fishes.”

“Heavy metals have been associated with many fish deformities in natural populations and in laboratory-produced specimens as well,” the study stated.

“Deformities, in general, have devastating effects on fish populations since they affect the survival, the growth rates, the welfare, and their external image,” it added.

Heavy metals can also impact humans who will consume fishes that were contaminated with heavy metals.

The same studies pointed out that accumulated heavy metals in the fish tissues directly transfer to the human body and cause toxic effects to expedite various diseases.

Dealing with the issues

According to Hernandez, the LLDA needs to have “long-term rehabilitation measures in Laguna Lake” to address issues such as the pollutants which damage fishes and other species found in the lake.

Currently, the LLDA has ongoing studies and collaboration with the Hungarian government. The engagement with the foreign country aims to put up wastewater facilities in hotspot areas of Laguna lake’s tributaries.

“It includes an early warning system which can help detect areas with high algae or low oxygen levels, among others, so the LLDA can be warned about these kinds of water quality issues,” Hernandez said.

The deal is being considered as one of the long-term solutions to preserve and improve water quality levels in Laguna Lake.

The 2002 study published in the Aquatic Ecosystem Health & Management meanwhile listed some immediate programs that are designed to protect the lake’s ecology. These programs were:

The scientists or researchers who wrote the study likewise urged the government, non-government agencies, and academic institutions to consult first with the open water fishermen and fish pen operators “to integrate their concerns in the plans and programs for lake restoration and enhancement activities and programs.”