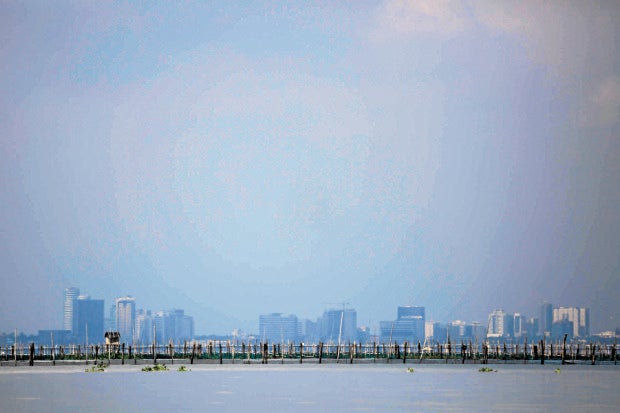 TROUBLED WATERS With the Metro Manila skyline as backdrop, fish pens are among the serious threats confronting Laguna de Bay for decades. —PHOTO BY REM ZAMORA

BIÑAN CITY—Bayani Enriquez, 54, grew up by Laguna de Bay in this city in Laguna province. Back in the 1980s, he often spent time with friends swimming or fishing in the lake’s unobstructed waters.

But much of the open space is now gone, with shanties occupying the shoreline, he said. It also never occurred to him how the lake, which gave him some sense of calm and security, would become a public hazard.

It was midday. Enriquez and his wife were going to market when rampaging floodwaters met them outside their subdivision. In less than an hour, the water rose waist-high. “It’s the worst I’ve seen,” Enriquez said.

Laguna de Bay was swollen and virtually kept several lakeshore towns and cities in the provinces of Laguna and Rizal, and Metro Manila flooded for months. More than 400 people died and 400,000 lost their homes.

The massive flood was a wake-up call to the government. At the height of the storm, the water level in the lake rose to 13.9 meters (the normal level is 10 meters). This was the highest since 1972 when the water level reached 14 meters during a storm and submerged most parts of Taguig City. The highest ever recorded was 14.62 meters in 1919.

Toward the end of her term, Arroyo entered into an P18.5-billion lake rehabilitation project with a Belgian company, Baggerwerken Decloedt en Zoon.

The project was supposed to cover the dredging of the 7-kilometer Napindan Channel (the lake’s only outlet to Manila Bay), dredging of a 70-km nautical channel, construction of 12 ferry stations, and rehabilitation of wetlands around the lake.

But what would have been one of the country’s “most ambitious” flood control projects fell through after President Benigno Aquino III took office in 2010 and ordered the deal shelved.

In a 2011 technical report, Malacañang said the areas to be dredged, in just a matter of three years, would end up silted again because of heavy deforestation and soil erosion.

The dike would not only serve flood mitigation purposes but also create a 47-km expressway between Taguig City and Los Baños town in Laguna and reclaim about 700 hectares of land around the lake.

The bidding eventually failed and not a single flood control structure was built.

In his first State of the Nation Address in July last year, President Duterte said he wanted issues on watershed destruction, land conversion and pollution in Laguna de Bay abated.

But Lopez is not very much interested in dredging and dikes, said environmental lawyer Ipat Luna, environment OIC undersecretary for legal affairs.

“You’ll be spending like P11 billion to P18 billion, only for the silt to pile up again after a few months. She (Lopez) does not see that as a long-term solution,” Luna said.

A former board member of the private Taal Lake Conservation Center in Batangas province, Luna was tapped by the DENR for a multisectoral rapid rehabilitation plan for the next six years.

This plan sits alongside the LLDA’s 10-year Laguna de Bay Basin Master Plan 2016 (an updating of the 1995 master plan) described by Luna as “more technical [and] less inclusive.”

“[T]he objective of this plan is to make a huge and observable dent in the major problems of the Laguna Lake,” Luna said.

“It’s a little more strategic in the sense that more sectoral help … is needed,” she said.

The plan identifies key issues that need immediate intervention. These are the overcrowding of fish pens, illegal reclamation, industrial pollution and domestic sewage, proliferation of water hyacinth, and sedimentation.

“[But] I think an urgent thing to do is to [conduct] a study to see what really is the carrying capacity [of the lake]—not just [in terms] of fish cage absorption but how much agricultural runoff and domestic sewage goes into the lake,” Luna said.

During the dry season, the lake’s average depth is 2.5 meters (4 meters during the wet season). This is much lower than what it used to be several decades ago when the average depth was around 8 meters, Luna said.

According to the LLDA, the rate of sedimentation increased from 1.03 centimeters per year in 1938 to 1.20 cm/year by 1997. This means that at the rate it is going, the lake could become shallower by another meter in the next century.

On top of those, illegal reclamation contributes to the shallowing of the lake.

In 2015, the LLDA filed 21 cases in the Taguig City Regional Trial Court against local governments for reclaiming portions of the shoreland. The total shoreland area covers 14,000 ha, of which 9,200 ha are in Laguna province, 3,670 ha in Rizal, and 1,130 ha in Metro Manila.

To arrest the rapidly increasing sedimentation, Luna said the government planned to build sabo dams around the lake.

Sabo dams are concrete structures meant to control debris and large amount of soil flowing into the lake.

The strategy is not exactly new.  Edgardo Manda, then LLDA general manager, rolled out in 2008 a bamboo program to reforest denuded areas and riverbanks.

The LLDA opened two bamboo nurseries in Calauan and Lumban towns in Laguna and had planted 327,235 seedlings as of 2015.

“Ecotourism is really a function of rehabilitation,” said Nereus Acosta, current LLDA general manager. “How can you open up areas of the lake or the mountains in Sierra Madre, or  Talim Island, if the state of degradation makes it unattractive?”

About 15 million people live within the lake basin, all the way up the Marikina watershed. Living on the shoreland are about 4.16 million people, most of them informal settlers without proper sewage facilities.

“The estimate is that at least half a million [people] are discharging raw sewage into the lake. The rest of them [may have] septic tanks but [these] are not maintained and [are therefore] dislodging raw sewage [into the water],” Luna said.

At least 80 percent of the pollution load comes from domestic waste, Acosta said.

Water quality is consistent  Class C (the highest category, Class A, is potable), meaning it is suitable only for fisheries and recreation, he said.

There are, however, indicators that the water quality in the west bay (with the highest concentration of illegal settlers) is already falling below standard, and heavy metals and toxic pollutants are present in the water.

In Europe, where there is an integrated sewerage system, he said “not a single drop of urine goes into Lake Geneva.” The same goes for Lake Michigan in the United States.

While big water concessionaires Maynilad and Manila Water Co. Inc. are providing wastewater treatment services, they only cater to concession areas or only about 15 percent of lakeshore communities, Acosta said.

Industries, while required to have their own primary sewage treatment facilities, also violate laws.

In 2015, the LLDA filed charges against 163 companies (out of 5,882 companies monitored) for water pollution.

But rather than resort to a massive resettlement program, the government intends to keep the settlers where they are now and build medium-rise houses for them around the lake.

Luna said the DENR planned to implement “strategically efficient and low-cost technologies,” like the use of compost toilets, biochar (charcoal used as soil enhancer), and wetlands to control septage.

She said the remaining empty spaces on the shoreland would be planted with bamboo, “so even if it looks like a slum now, creating greenery will control the sewage discharges.”

“It will be prettier and you will have ecotourism,” Luna said.

Under the National Sewerage and Septage Management Program (as mandated by the Clean Water Act of 2004), local governments should have their own treatment facilities or at least ensure that households are connected to piped sewerage by 2020.

“I’m so frustrated that we’re building so many roads like there’s no tomorrow (yet) we’re not building septage tanks. That’s just like putting on makeup without taking a shower first,” Luna said.

“One thing that people have to understand is that all lakes have a life cycle. The more rain carves into the soil and pushes that soil into the lake, the faster it will go. Eventually, all lakes will die,” she said.

It is now a matter of “delaying considerably” the deterioration for the lake to be used for generations to come, she said.

Presented with the government’s solutions, fish pen operators and fishermen welcomed the interventions but cast doubts on their implementation.

Charlie Tan, a fish pen operator at Binangonan town in Rizal, said the aquaculture industry could coexist with ecotourism ventures with traders willing to invest in restaurants or resorts around the lake.

But Fernando Hicap of Pambansang Lakas ng Mamamalakaya, a national group of fishermen, said the government should prioritize the welfare of poor fishermen over business and ecotourism.

Acosta said: “To have a business-as-usual attitude and approaches [in solving the problems of Laguna de Bay] is just really going to be unsustainable.”