After 4 days in coma, girl hit by bullet on New Year’s Eve dies

Malabon teen, a scholar who wanted to be a chef, was given a very low chance of survival
By: Kristine Felisse Mangunay, Tina G. Santos - @inquirerdotnet
Philippine Daily Inquirer / 12:30 AM January 05, 2017 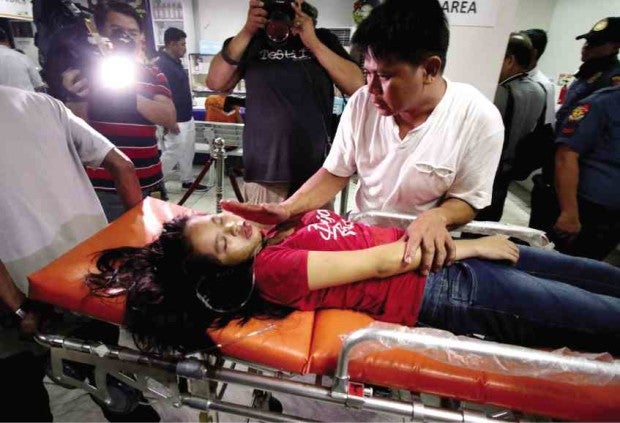 The 15-year-old girl who ended up comatose after she was struck in the head by a bullet on New Year’s Eve in Malabon City has passed away.

Her remains will undergo an autopsy, Ubial said.

Since being shot in the head while watching a fireworks display near her house in Malabon, Villanueva had been confined at the surgical intensive care unit of Jose Reyes Memorial Medical Center (JRMMC) in Sta. Cruz, Manila.

Hours before, case investigator PO2 Maria Teresa Dagman told the Inquirer that the teenager remained in a coma, based on an update given by Melody Labrador of Barangay Agustin where the victim lived.

There was also a media report released earlier which said that Villanueva’s condition had improved as she no longer had a fever.

Reached by the Inquirer at 5 p.m., over an hour before she would pass away, a JRMMC staffer confirmed that the girl remained at ICU.

Villanueva, a scholar who wanted to become a chef, had been given by doctors a “very low chance of survival.”

According to JRMMC hospital director Dr. Emmanuel Montaña Jr., the bullet had damaged 50 percent of her brain, affecting the parts responsible for speech, motor and other critical functions.

The teenager was initially reported as one of the four victims of indiscriminate firing during the holiday season.  The police, however, claimed that the shooter fired his gun deliberately although the teenager was not the target.