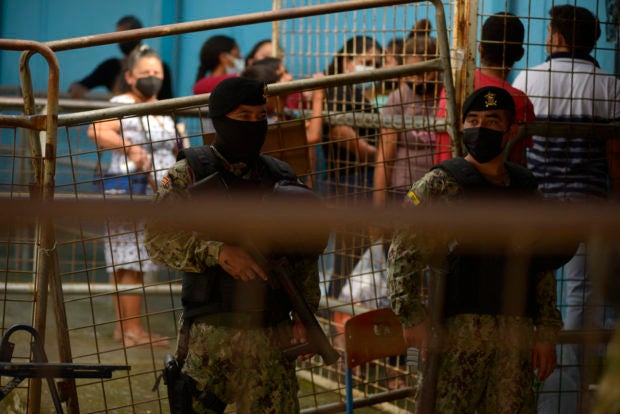 Soldiers stand guard at the entrance of the Guayas #1 prison en Guayaquil, Ecuador on February 3, 2022, after authorities reported riots and security was reinforced. AFP

QUITO — Ecuador’s President Guillermo Lasso announced Tuesday some 5,000 prisoners would be pardoned to reduce overcrowding in the country’s prisons, which were hit with riots that left more than 320 inmates dead in 2021.

“I hope that at least 5,000 people deprived of their freedom will be released,” the president told reporters.

He said he aimed “to end overcrowding by the end of the year and thus have a much more favorable environment for security and for social rehabilitation inside the prisons.”

Some 15,000 of the prisoners have not been sentenced.

More than 320 inmates were killed in 2021 in a surge of violence blamed on fighting between rival drug groups in Ecuador, nestled between the world’s biggest cocaine producers, Colombia and Peru.

Lasso signed a decree Monday to establish the conditions and system for pardons.

The effort will target prisoners charged with theft, fraud or breach of trust, local media reported.

Overcrowding in Indonesian prisons serves in favor of IS militants