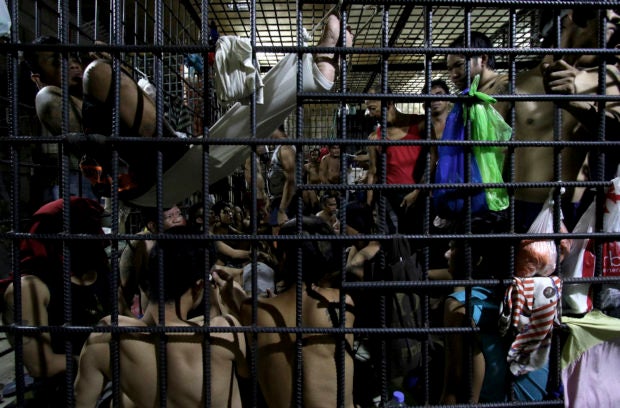 PHOTO by RICHARD A. REYES

MANILA, Philippines — Senators urged the Department of Justice (DOJ) and the Bureau of Corrections (BuCor) on Wednesday to develop a roadmap to decongest the Philippines’ prisons after learning of the over 300 percent congestion rate in the country’s jails and penal facilities.

“The bottom line is we want to decongest our jails and provide better facilities for our fellow Filipinos who ran afoul with the law. They are not hopeless human beings. But sometimes when you look at their conditions, it looks like we have given up hope for them, which should not be the case,” Senate Minority Leader Franklin Drilon said during the budget hearing of the Department of Justice (DOJ).

Senator Sonny Angara, chairman of the Senate finance committee, also called for a roadmap addressing prison overcrowding in the country, quoting French novelist Honore de Balzac that “it is cheaper to educate a child than to imprison a person.”

“The cost of imprisonment of an individual is more expensive than educating an individual. If we don’t pay attention to this problem, to these people, then how can we think of reforming them?” the senator said.

He said the Justice Department and Bureau of Corrections must submit a five- to ten-year plan and funding schedule to Congress so that it can find ways to fund this every year fully.

The original capacity of the NBP is supposed to be at 6,435, but it currently houses 28,545 inmates.

Meanwhile, all of the operating prisons and penal farms across the country have an average congestion rate of 303 percent.

In describing the NBP as “one of the most expensive prisons in the world,” Drilon also suggested that it be transferred outside the National Capital Region.

“Why can we not move the NBP out of Muntinlupa? We must transfer the NBP outside the capital region and provide better facilities, the minority leader said, adding that the proceeds for the sale of NBP properties can be used to finance the building of bigger and better prison facilities outside Metro Manila.

In response, DOJ Secretary Menardo Guevarra assured senators that the agency would come up with clear plans in decongesting the country’s prisons.

“We’ll make it a point that before we end our administration in the Department of Justice there will be some very clear plans about the intention to transfer the location of the National Bilibid Prison elsewhere,” he added.

Read Next
IBP asks Duterte: ‘Reconsider’ order barring Cabinet men in Senate probe
EDITORS' PICK
Duterte praises military but slams police for poor discipline, corruption
COVID-19 cases surging in all regions and provinces, says DOH
Acer starts the year off strong with the Aspire Vero National Geographic Edition
DOH: Too early to say COVID-19 cases are declining
The best of bayside and city living at SMDC’s Sail Residences
Over 3 Million worth of prizes to be won at Smart Padala’s SENDali Manalo Promo!
MOST READ
Expert cites need to ‘reimmunize’ whenever there’s new concerning variant
Duterte praises military but slams police for poor discipline, corruption
Duterte wants Lapulapu statue in Cebu ‘bigger and higher’ than Magellan’s
Djokovic has to comply with rules to go to Spain, PM says
Don't miss out on the latest news and information.