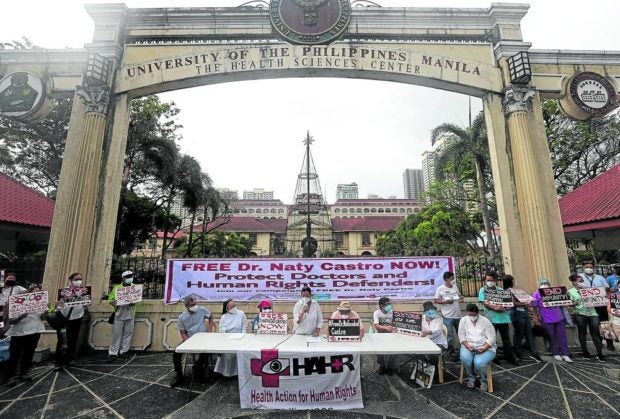 PROTEST | Colleagues of Dr. Natividad Castro, including her brother Delfin Jr. (center), hold a protest in front of the University of the Philippines-Philippine General Hospital compound in Manila on Monday, Feb. 21, 2022, to denounce her arrest after she was red-tagged. (Photo by MARIANNE BERMUDEZ / Philippine Daily Inquirer)

MANILA, Philippines — The police officers in the controversial arrest of community doctor Natividad “Doc Naty” Castro could be held liable for possible lapses in their procedure, the Commission on Human Rights (CHR) said on Monday.

The commission cited a number of circumstances in Castro’s arrest which could be raised against the arresting officers: not showing proper identification, denying her access to a lawyer, and refusing to tell her family where she would be taken.

Police raided Castro’s home in San Juan City last Friday and took her with them, eventually detaining her at the police headquarters of Bayugan City in Agusan del Sur province, some 820 kilometers away from Metro Manila.

Castro’s brother, Delfin Jr., claimed that the police did not bring a warrant with them and did not bother to inform the household where she would be taken.

Only later did the family see the warrant issued against Castro for alleged kidnapping and serious illegal detention.

The CHR said that under the Manual on Police Operational Procedures of the Philippine National Police, arresting officers are duty-bound to identify themselves and show proper identification, deliver without delay the accused to the nearest police station and ensure that the person arrested is informed of his or her right to legal representation.

“Should these allegations [concerning Castro’s arrest] prove to be true, arresting officers are not only liable for violation of PNP’s operational procedure[s], but also … violation of the rights of persons arrested and detained under Republic Act No. 7438,” the commission said, referring to the law which defines the rights of persons under police custody as well as the duties of the police officers involved.

The CHR also noted that the PNP only disclosed Castro’s whereabouts due to public pressure, after several groups and even a number of lawmakers expressed concern for her safety.

Furthermore, the PNP’s Red-tagging of Castro “sends a chilling effect not only to community workers, but also to doctors serving in rural areas engaged in development work,” the CHR said.

Castro, 53, has been involved in community work for almost three decades, including setting up health centers for the “lumad” (indigenous peoples) in Mindanao.

The PNP has accused her of being a member of the Communist Party of the Philippines and its armed wing, the New People’s Army.

But Interior Secretary Eduardo Año said the police who arrested her were “just doing their jobs. Why gang up on them?”

He maintained that what happened to Castro “was not a warrantless arrest.”

“The regional trial court issued a warrant and it’s their duty to serve it,” he said, referring to Regional Trial Court (RTC) Branch 7 in Bayugan City.

He insisted that Castro’s rights are not being violated, as her lawyers are free to visit her.

Año also criticized the Free Legal Assistance Group, National Union of Peoples’ Lawyers and other lawyers assisting Castro, saying they “had every opportunity to quash the charges against her at the level of the city prosecutor during the preliminary investigation and even with the court.”

“The prosecutor found probable cause against her and resolved to file criminal charges with the RTC. The presiding judge also judicially determined that there was probable cause which is why he issued a warrant of arrest so that she [could] face the charges against her in court,” he added.

“[The lawyers] could have challenged the prosecutor’s findings and appealed it [before] the Department of Justice. Or if they wanted to challenge the warrant, they could have brought it to the Court of Appeals or even the Supreme Court,” Año said further.

“They just needed to be diligent and do their jobs instead of maligning the PNP, the judicial system and making a media circus out of this issue,” he added.

The legislative body of the European Union (EU) had issued a resolution urging the EU to have the Philippines “comply with its human rights obligations” or lose its trade privileges under the Generalised Scheme of Preferences Plus.

Other recommendations in the resolution include the abolition of the National Task Force to End Local Communist Armed Conflict, the release of opposition Sen. Leila de Lima and the conduct of “fair and free” elections in May.

“The [European] Parliament should also look into Doc Naty’s case as calls to put a stop to [R]ed-tagging and attacks on human rights defenders now reverberate,” Zarate said.

“The move of the European Parliament is certainly not an interference with our internal affairs but a clear show of concern on the horrendous human rights situation in our country,” he added.

—WITH REPORTS FROM JEANNETTE I. ANDRADE AND JULIE M. AURELIO