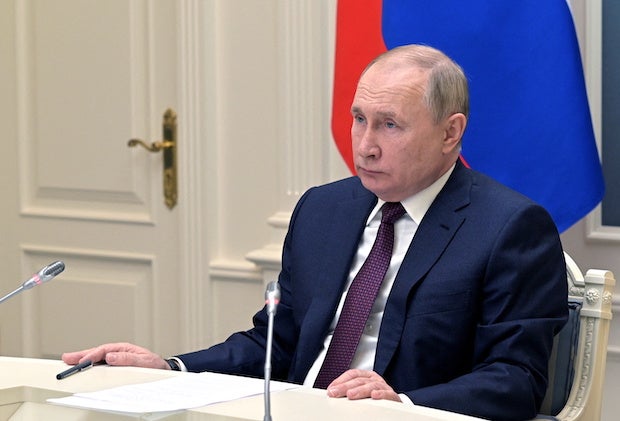 Russian President Vladimir Putin signals the start to training launches of ballistic missiles as part of the exercise of the strategic deterrence force, in Moscow, Russia February 19, 2022. (Sputnik/Aleksey Nikolskyi/Kremlin via REUTERS)

MOSCOW — President Vladimir Putin told his Security Council on Monday that Russia should consider recognizing the independence of two breakaway regions in eastern Ukraine, a step that would be certain to inflame its standoff with the West and Kyiv.

The Kremlin leader made the remark on state television shortly after the heads of two self-proclaimed republics in eastern Ukraine publicly appealed to Putin to recognize their independence.

The Moscow-backed regions have been thrust to the forefront of a crisis over a Russian military buildup near Ukraine that has fuelled fears of an impending invasion. Russia denies planning to invade.

Putin told officials he thought it was clear Ukraine would not implement the Minsk peace process aimed at ending the conflict in the mainly Russian-speaking region between Ukrainian government forces and separatists that has cost 15,000 lives.

“It is clear to everyone that (Ukraine) is not going to do anything on this Minsk package of measures… Russia has made and is still making efforts to peacefully resolve all the difficult and tragic elements in the development of events, but today we are where we are,” he said.

He made the remarks at a meeting of the Security Council that he chaired and which he said was aimed at determining Russia’s next steps.

Officials including the defense minister, head of the Federal Security Service (FSB), two parliament speakers, and other top officials weighed in.

The head of the FSB told Putin that the security situation in Donbass was deteriorating and that 70,000 people had been evacuated from them to Russia after separatists announced a mass evacuation on Friday.

The televised meeting of the powerful Security Council, which usually meets strictly behind closed doors, was highly unusual. It was announced suddenly on Monday ahead of a meeting of the lower and upper houses of parliament on Tuesday.

If Moscow does recognize the regions it could pave the way for Russia to openly send military forces into them, using the argument that it is intervening as an ally to protect them against Ukraine.

Russia’s rouble fell to its weakest against the dollar since Jan. 27 on Putin’s remarks.

Lithuania to boost defense spending due to Ukraine crisis