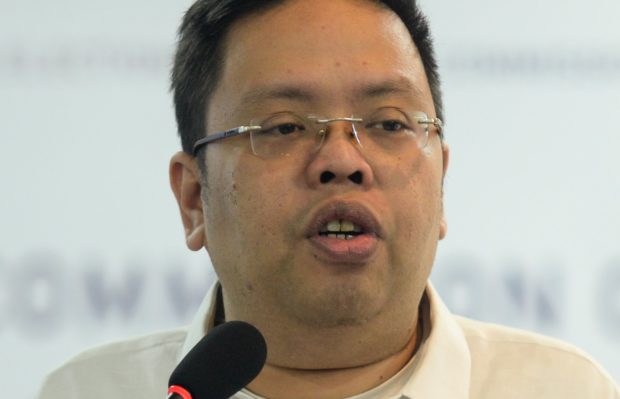 MANILA, Philippines — The Commission on Elections (Comelec) said Friday that it may file cases against private property owners who will “remain adamant” on keeping oversized campaign materials displayed on their premises.

“It’s okay. That’s their right. They can refuse entry. What happens in practice is that they are advised of the violation and the next steps that the Comelec will take,” Jimenez told CNN Philippines’ The Source.

“For example, you have a situation where we see large posters on private property or large billboards on private property, we inform the property owners that those materials have to be taken down. If they refuse, then we serve them notice that they need to take them down. Then if they remain adamant, baka magkaroon ng kasuhan (there may be filing of cases),” he added.

Authorities removed oversized posters and those displayed in non-common poster areas as the Comelec started on Wednesday its “Operation Baklas” against “unlawful” campaign materials. But some candidates have complained about the takedown of posters displayed by their supporters in private properties.

However, Jimenez acknowledged that there may be room for calibration in the Comelec rules.

“As far as Comelec has been concerned, up to Wednesday, this has not been an issue for us, but again this is being pointed out now by a lot of people, constitution experts, for example, election lawyers, and the Comelec is not averse to discussing this,” he said.

“Baka (Maybe) there is room for calibration here, there might be room for clarification, and again the Comelec is very open to these kinds of discussions,” he added.

As for murals, Jimenez admitted it was not mentioned in the Comelec guidelines mandating the size of campaign materials.

“Hindi ‘yan technically kasama or at least hindi nabanggit ang murals sa ating resolution (That is technically not mentioned in the resolution) and again that might be one of the areas we’d have to look [at] again,” he said.

Jimenez made the comment when asked about a mural for Vice President Leni Robredo and her running-mate Senator Francis Pangilinan that was painted over by authorities. According to Jimenez, authorities have secured consent from the owner of the property.

“There was consent doon sa ginawa eh. Nagpaalam po ang Comelec official na tatanggalin ‘yung mural na iyon, and in fact we do have a video of the property owner saying na pwede bang pink na lang ang ilagay ninyo, so there was consent,” he said.

(There was consent in what we did. The Comelec official asked for permission to paint over that mural, and in fact, we have a video of the property owner asking if we can use pink in painting it over. So there was consent.)

“Again, ultimately that’s all we have going forward, that there was consent on this, but again technically speaking, it is not part of our resolution,” he added.