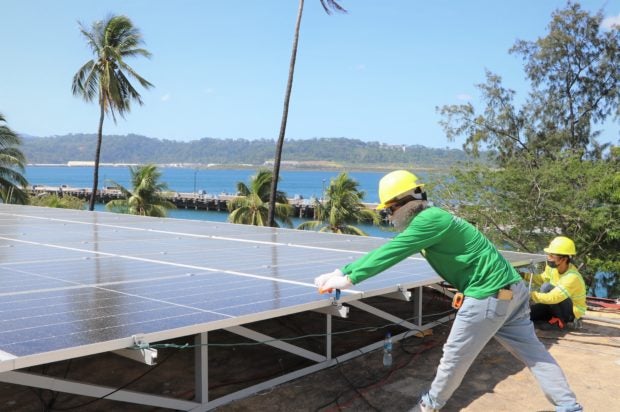 FILE PHOTO Solar panels are being installed at the rooftop of Bldg. 229 or the administration building of the Subic Bay Metropolitan Authority. (Photo courtesy of SBMA)

MANILA, Philippines — Presidential candidate Ferdinand “Bongbong” Marcos Jr. on Friday vowed to support Filipino inventors so that they can prove that Filipinos are “as talented and inventive as other races.”

Marcos said local inventors should be given all the needed support so that they will be encouraged to work on their inventions which could place the Philippines at par with other nations in technological innovations.

He said he and his running mate Davao City Mayor Sara Duterte-Carpio planned to elevate the level of research and development and raise the country’s technological status by focusing more and supporting Filipino inventors and scientists.

Marcos added that students’ skills and well-being should be cultivated at a young age.

“Dapat ibalik natin ang pagiging Pilipino ako, taas noo kahit kanino. If the student has a potential and passion to discover or make an innovative invention, he should be immediately supported by the government,” he said in a press release.

(We should bring back the Filipino pride.)

“Make them feel how important they are to the country and that all the support will be given to them as they work on their inventions,” he added.

Marcos also said he wants to improve the quality of solar panels and other alternative and renewable energy sources to address high electricity rates in the Philippines.

He said he is convinced that solar panels could be of big help to the electricity problems of many households, especially those who are in underserved areas.

(Because some of our solar panels are not that reliable, many of Filipinos are scared to buy because they think it would be damaged soon. If the government will be strict in ensuring the quality of solar panels, maybe Filipinos would be encouraged to use solar energy even in their homes.)

He acknowledged the Liter of Light invented by Filipino innovator Illac Diaz in which solar lamps are illuminated using recycled plastic soda.

These types of inventions, he said, bring great inspiration and honor to the country, apart from the fact that they could be used as cost-saving devices and help slow down global warming.