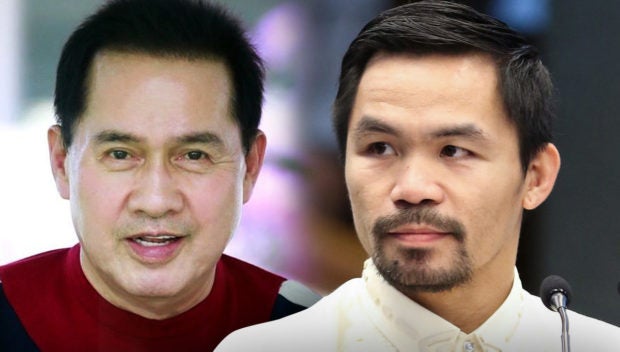 “Sa tingin ko at mayroon naman tayong treaty agreement sa US at ibibigay natin siya sa US dahil doon siya nagkasala. Panagutan niya,” Pacquiao said at a FOCAP forum when asked if he will allow Quiboloy to be extradited if the US requests.

(We have a treaty agreement with the US and we will give him to them because that is where he committed the alleged crime. He has to answer for it.)

No request for extradition yet

The Department of Justice earlier said that there is no extradition request yet for Quiboloy. Should there be one, the request would have to go through the diplomatic channels.

Once there is a request, the Department of Foreign Affairs will check the sufficiency of the request.

“If sufficient, the DFA endorses it to the DOJ. We then file a petition for extradition with the proper RTC (Regional Trial Court) on behalf of the US government,” Justice Secretary Menardo Guevarra said.

Guevarra added that the DOJ may place the self-styled religious leader on the immigration lookout bulletin order (ILBO) even without a formal request by any party (motu proprio).

The DOJ is also currently studying and reviewing an appeal for a local case filed against the self-proclaimed “Appointed Son of God,” where a woman accused Quiboloy of raping her in 2014.

The woman filed rape, child abuse, and human trafficking complaints against Quiboloy and five other members of his church in 2019.

Pacquiao earlier balked at joining the debate hosted by Quiboloy’s media network, SMNI, citing the charges filed against the religious leader in the US.

Won’t stand in the way of US authorities

His camp likewise filed a motion for reconsideration for the decision of the Makati City Prosecutor’s Office to dismiss his P100-million cyber libel complaint against Quiboloy.

Pacquiao, however, is considering withdrawing his motion for reconsideration to give way to the latter’s possible extradition to the United States, according to the presidential candidate’s lawyer.

The senator, who is eyeing the presidency in the May 9 elections, said he will allow the authorities to decide on the case of Quiboloy.

(I will leave it to the authorities, which is the government. We have laws and whatever the decision of the government, it would coordinate with the US to resolve this problem if ever Quiboloy has not yet surrendered.)