Russia says some troops pulling back from near Ukraine | Inquirer News

Russia says some troops pulling back from near Ukraine 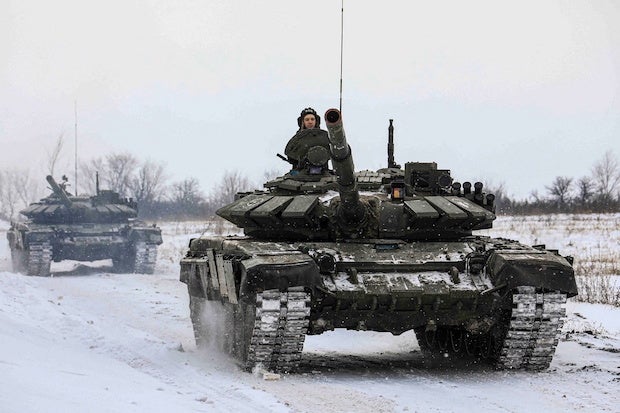 MOSCOW — Russia said on Tuesday some of its troops were returning to base after exercises near Ukraine and it mocked repeated Western warnings about a looming invasion, but NATO said it had yet to see any evidence of de-escalation.

Russia did not say how many units were being withdrawn, and how far, after a build-up of some 130,000 Russian troops to the north, east, and south of Ukraine that has triggered one of the worst crises in relations with the West since the Cold War.

The development drew a guarded response from Ukraine and its Western allies but prompted a rally on financial and oil markets. Western military analysts said it was too soon to be sure of the extent of any de-escalation.

The Kremlin sought to portray the moves as proof that Western talk of war had been both false and hysterical.

NATO’s chief welcomed signals from Russia in the past two days that it may be looking for a diplomatic solution but urged Moscow to demonstrate its will to act.

“There are signs from Moscow that diplomacy should continue. This gives grounds for cautious optimism. But so far we have not seen any sign of de-escalation on the ground from the Russian side,” NATO Secretary-General Jens Stoltenberg told reporters.

He said Russia often left military equipment behind after exercises, creating the potential for forces to regroup.

British Prime Minister Boris Johnson said there were signs of a diplomatic opening but “the intelligence that we’re seeing today is still not encouraging”.

Ukraine’s Foreign Minister Dmytro Kuleba said Kyiv would only believe that Russia was moving to de-escalate the situation if it saw for itself that Russian troops were being pulled back.

“If we see a withdrawal, we will believe in a de-escalation,” Interfax Ukraine quoted him as saying.

Russia has always denied planning to invade, saying it can exercise troops on its own territory as it sees fit. It has been pressing for a set of security guarantees from the West, saying it fears NATO is encroaching on its Western flank.

Recognition of the self-declared Donetsk and Luhansk People’s Republics could kill off the Minsk peace process in east Ukraine, where a conflict between government forces and Moscow-backed separatists has killed 15,000 people.

It was not clear how Putin would respond.

NATO’s Stoltenberg said such a move would be “a blatant violation of Ukraine’s territorial integrity and sovereignty”. Latvia said the European Union should impose sanctions on Russia if it recognized the separatists.

Russia’s show of force near Ukraine’s borders has prompted months of frantic Western diplomacy and drawn threats of severe sanctions if it invades, culminating in a crescendo of U.S. and British warnings in recent days that this could happen at any time.

“In terms of the timing of an attack, it could be imminent,” British Foreign Secretary Liz Truss said on Tuesday. She said Russian troops could reach Ukraine’s capital Kyiv “very, very quickly”.

France said it had yet to confirm the return of some troops to bases, though this would be a positive sign. German Chancellor Olaf Scholz, on the latest Western diplomatic mission to defuse the crisis, met Putin in the Kremlin.

Russian shares, government bonds, and the rouble, which have been hit by fears of impending conflict, rose sharply, and Ukrainian government bonds also rallied. Oil dropped more than 3% from a seven-year high reached on Monday.

Video footage published by Russia’s defense ministry showed some tanks and other armored vehicles being loaded onto railway flatcars. But Western military analysts said they needed more information to judge the significance of the latest troop movements.

“One should maintain an air of cautious skepticism,” said Henry Boyd of the International Institute for Strategic Studies in London. “There have been past discrepancies between Russia’s official announcements and its actions on the ground.”

Konrad Muzyka, director of the Poland-based Rochan consultancy, told Reuters it would take several days to verify the latest moves via satellite imagery.

“It should also be noted that new trains with equipment from Central Russia keep on arriving near the border and that Russian forces continue to move towards staging areas. The announcement stands in direct opposition to what Russia has been doing for the past few days,” he said.

Commercial satellite images taken on Sunday and Monday showed a flurry of Russian military activity at several locations near Ukraine, according to the private US company that released the pictures.

US-based Maxar Technologies pointed to the arrival of several large deployments of troops and attack helicopters as well as new deployments of ground attack aircraft and fighter-bomber jets to forward locations.

Ukraine hints at concessions to Russia as Scholz heads to region