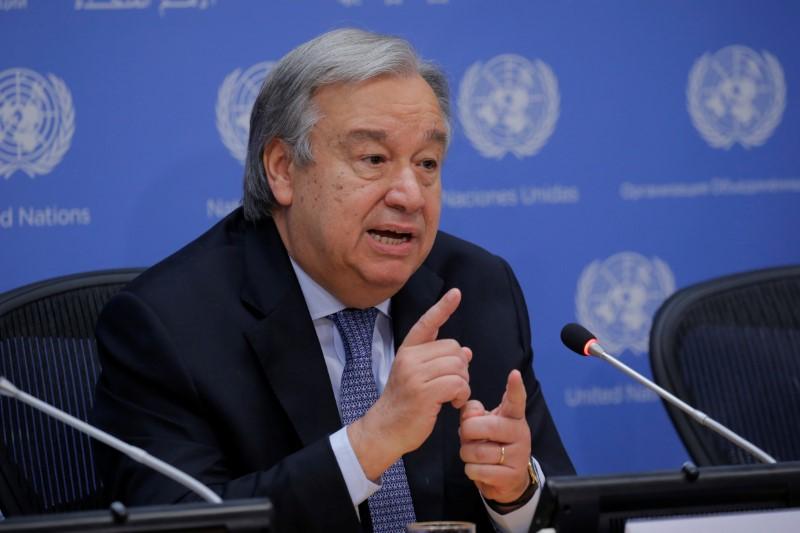 UNITED NATIONS — United Nations chief Antonio Guterres warned Monday it was time to “defuse tensions” between Russia and the West over the Ukraine crisis, saying he was “deeply worried” about the threat of conflict.

“The time is now to defuse tensions and de-escalate actions on the ground,” said Guterres, who earlier spoke to the foreign ministers of Russia and Ukraine and expressed his serious concern over the situation.

Calling for an end to “incendiary rhetoric,” the UN secretary-general told reporters he was “deeply worried by the heightened tensions and increased speculation about a potential military conflict in Europe.

“We simply cannot accept even the possibility of such a disastrous confrontation,” he said, insisting that “there is no alternative to diplomacy.”

Guterres called on all parties to respect the UN Charter and refrain from “the threat or use of force against the territorial integrity or political independence of any state.

“Abandoning diplomacy for confrontation is not a step over a line, it is a dive over a cliff,” he said.

“The secretary-general expressed to both foreign ministers his serious concern over the heightened tensions around Ukraine,” Dujarric told reporters.

“He welcomed the ongoing diplomatic discussions to defuse those tensions and underline yet again the fact that there is no alternative to diplomacy.”

Dujarric said Guterres remained convinced that Russia will not invade Ukraine, a position he expressed during a press conference last month.

“I don’t believe his opinion has changed in any way,” said the spokesman during his daily briefing at UN headquarters in New York.

The United Nations has some 1,660 staff in Ukraine including 1,440 Ukrainians and 220 foreigners.

“There are no plans for evacuation or relocation of UN staff” from Ukraine, Dujarric said.

The Security Council is due Thursday to hold an annual meeting on Ukraine and the Minsk agreements, which sought to end war in the eastern Donbas region of Ukraine.

RELATED STORIES
Explainer: Can the UN do more than just talk about Russia, Ukraine crisis?
US, China lock horns over Ukraine at UN
US envoy to UN cancels Liberia trip to focus on Russia
US says more Russian troops mass near Ukraine, invasion can come at any time