DND gets P1 billion worth of equipment from China | Inquirer News

DND gets P1 billion worth of military, engineering equipment from China 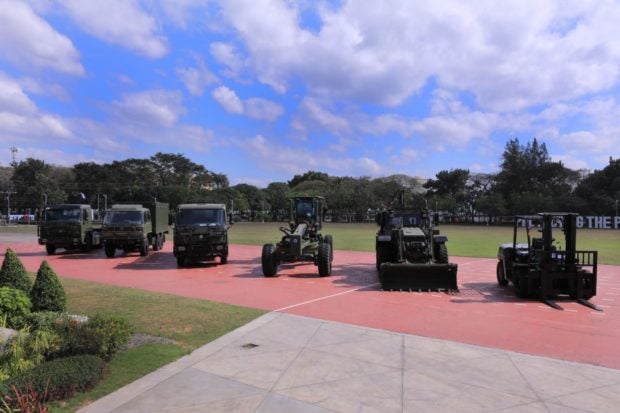 Transport and engineering vehicles were part of the donation from China that the Department of National Defense received on Wednesday, Feb. 9, 2022. (Photo from the DND)

MANILA, Philippines — The Department of National Defense (DND) received on Wednesday P1 billion worth of military equipment from China for the rehabilitation of Marawi City and other humanitarian assistance and disaster response operations.

The equipment was donated by the Ministry of National Defense of the People’s Republic of China, according to Defense Secretary Delfin Lorenzana.

“This military grant from China speaks volumes on how our two nations can be civil, diplomatic, and friends despite some issues on territorial claims,” Lorenzana said at the ceremonial handover of the donated equipment.

The shipment first arrived on Jan. 16, as part of a pledge by Chinese Gen. Wei Fenghe during his visit to Manila in 2020.

Meanwhile, a second batch of equipment worth 54 million renminbi (around P435 million) will be delivered at a later date.

Present during the ceremonial handover were Huang Xilian, the Chinese Ambassador to the Philippines, and Gen. Andres Centino, the chief of staff of the Armed Forces of the Philippines.