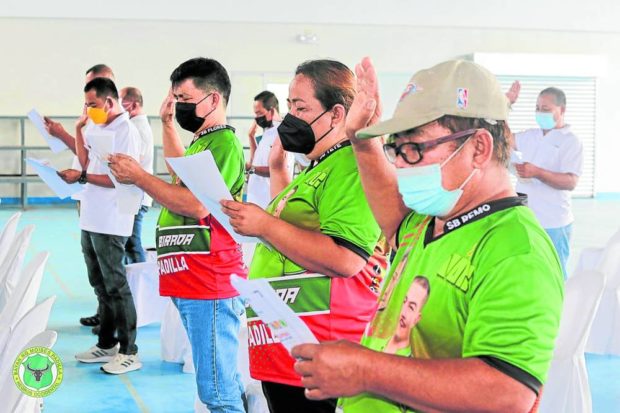 PLEDGE: Candidates seeking elective posts in Moises Padilla town in Negros Occidental pledge to keep the May 9 elections peaceful in a program led by the Commission on Elections on Tuesday. (Phot from the Facebook account of the Moises Padilla LGU)

BACOLOD CITY, Negros Occidental, Philippines — The Commission on Elections (Comelec) has identified five cities and seven towns in Negros Occidental as election “areas of concern,” due to intense political rivalries and the presence of communist rebels and private armed groups there.

Roberto Salazar, acting provincial elections supervisor, released on Monday the list based on the recommendations of the Philippine National Police and the Armed Forces of the Philippines. The list, he said, was sent to the Regional Joint Peace and Security Coordinating Council chaired by the Comelec regional director.

ThreatsDon Salvador Benedicto town has been listed as an area of concern while the cities of Silay, Victorias, Himamaylan, and Kabankalan; and the towns of Manapla, Toboso, Binalbagan, and Hinoba-an have been classified as areas of immediate concern.

Candoni and Moises Padilla towns, and Escalante City are under areas of grave concern category.

According to the Comelec, a town or city may be categorized as an area of concern if it has a history of poll-related violence and the occurrence of intense political rivalries.

Areas of immediate concern are those known for the presence of communist rebels and/or private armed groups, while areas of grave concern are a combination of factors identified in the first two categories.

Salazar said there could be changes on the list based on developments in the coming days.

The campaign period for candidates in local elective positions, including members of the House of Representatives as well as regional, provincial, city, and municipal officials begins on March 25 and ends on May 7.

Despite the presence of rebels in some parts of Negros Occidental, Salazar said the military was confident that its internal security operations could contain threats from rebels.

READ: Comelec ‘areas of concern’ for May polls yet to be declared