No message toward Seoul or Washington was delivered amid escalated tensions on the peninsula after NK’s barrage of missile launches
The Korea Herald/Asia News Network / 04:54 PM February 08, 2022 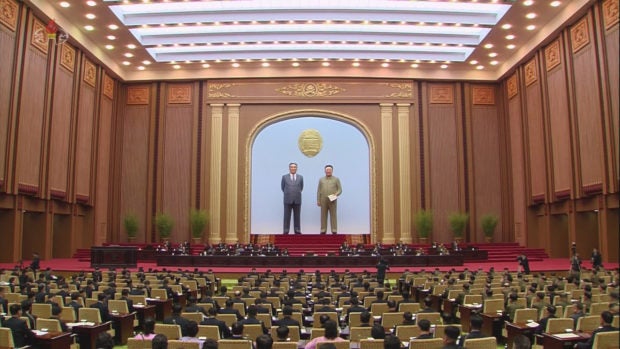 North Korea convened the sixth session of the 14th Supreme People’s Assembly in Pyongyang on Sunday and Monday, in this photo captured from the North’s official Korean Central Television on Tuesday. Leader Kim Jong-un did not attend the meeting. (KCTV-Yonhap via The Korea Herald/Asia News Network)

The sixth session of the 14th Supreme People’s Assembly was held in Pyongyang on Sunday and Monday, the North’s official Korean Central News Agency said Tuesday.

There was no separate message toward Washington or Seoul amid heightening tensions on the Korean Peninsula, unlike last September when leader Kim said at the SPA that he is willing to reopen the severed inter-Korean hotlines while denouncing Washington’s “hostile policy.” The leader’s attendance is not required at the assembly, but he has often appeared in the past and gave speeches.

Observers had speculated that Pyongyang could comment on foreign policy or inter-Korean relations, especially as the meeting came on the heels of the regime’s recent back-to-back missile tests, including an intermediate-range ballistic missile late last month.

Instead, the session was led by Choe Ryong-hae, chairman of the SPA standing committee, and largely focused on domestic issues, including reviewing the cabinet work and state budget and adopting new laws on child care and the protection of overseas resident’s rights and interests, as it had announced earlier.

“The latest SPA meeting appears to have focused on taking budgetary and legal measures to back tasks for 2022 revealed at the country’s party plenary meeting last year,” said an official at the Unification Ministry, in charge of inter-Korean affairs.

During the session, North Korean officials decided a 33.3 percent on-year hike in expenditures for “emergency epidemic prevention work” this year, according to the KCNA, though it did not specify the exact amount.

Pyongyang has imposed strict border restrictions since the onset of the pandemic, dealing a blow to its economy, which is suffering from international sanctions. Recently there have been signs that the regime may slowly reopen its border for trade with its top ally China, with reports that the cargo trains have tentatively resumed operations between the two neighbors.

Cheong Seong-chang, director of the Center for North Korean Studies at the Sejong Institute in Seoul, said the virus budget increase appears to be closely related to Pyongyang’s preparation to expand trade and people-to-people exchanges with China. He added that the North could adopt a Chinese-style pandemic response around April, which is of sealing certain regions when infection is reported, instead of locking down the whole country.

At the meeting Kim Tok-hun, premier of the cabinet overseeing the economy, stressed the North’s pandemic response as the “top priority of the state affairs” and that the measures will be “put on a scientific basis to guarantee the security of the country and the people.”

Kim, while recognizing the regime’s economic difficulties due to the pandemic and international sanctions, called for the need to develop the economy and improve the people’s living standards.

“Last year the economic construction field faced more difficult and complicated problems than expected due to the hostile forces’ persistent sanctions and global health crisis, but waged a persevering struggle for putting the country’s economy in a new orbit of development,” Kim was quoted as saying. “We are now faced with a heavy yet responsible task to lay a sure guarantee for implementing the five-year plan and make evident changes in developing the economy and improving the standard of people’s living.”

N. Korea to convene parliament as economic woes cause strain