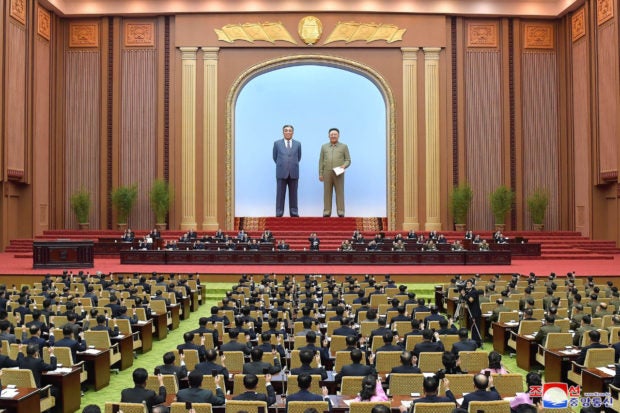 The fourth session of the 14th Supreme People`s Assembly held in Pyongyang on Sunday. KCNA-Yonhap via The Korea Herald/Asia News Network

The 14th Supreme People’s Assembly gathered for a fourth session in Pyongyang on Sunday, with delegates unanimously approving the five-year economic development plans unveiled at the Workers’ Party congress that ended last week, according to the North’s official Korean Central News Agency. It also confirmed the state budget for this year and replaced six out of eight vice premiers that were in charge of economic policy. It conducted a major reshuffle of ministers, appointing new ministers for the electric power, chemicals, railways, mining, postal and telecommunications, finance, commerce and labor industries, among others.

North Korean leader Kim Jong-un was absent from the session. While the leader’s attendance is not required at the assembly, he has often appeared in the past.

The reshuffle comes after Kim admitted the country’s five-year economic plan that ended last year failed to meet its targets in “almost every sector” at the latest party congress. In announcing the new five-year economic plan, Kim beefed up the nation’s drive for “self-reliance” and “self-sufficiency,” as the North faces serious economic challenges in the wake of prolonged US-led sanctions and the coronavirus pandemic.

North Korea’s Premier Kim Tok-hun, while presenting a report on the previous five-year economic plans at the parliament, said “serious mistakes” were observed, adding that the country faces “heavy tasks to unconditionally carry out the five-year plan for national economic development.”

He vowed to put the economy back on a “normal track,” unaffected by any outside influence, and stressed putting priority on developing key industries, such as metals and chemicals.

There was, however, no reshuffle of the State Affairs Commission, the country’s highest decision-making body under direct control of leader Kim, at the assembly.

During the session, the North increased its total budget by 1.1 percent from last year, with a 0.6 percent rise in economic development, a significant decrease from last year when it was raised by 6 percent. The North also announced a 2.5 percent increase in its public health spending this year, reflecting efforts to contain the COVID-19 pandemic, as well as a 3.5 percent rise in the education sector.

The total state budget remains unknown, as the country does not give out exact figures, only percentages of the total, when it discloses its annual budget plans at the assembly.

The North usually holds a plenary session in March or April, but this year it was moved earlier, less than a week after Pyongyang completed the eight-day ruling party congress.

“It appears the North held the SPA session unprecedentedly in January to show that the country’s five-year economic plan is being put into the new year’s budget as soon as possible, as well as to conduct a reshuffle of Cabinet members who had failed to carry out the previous economic plan,” said Cheong Seong-chang, a fellow at the Wilson Center’s Asia Program. “There is a possibility that North Korea could move up the SPA session to January like this time in the future.”