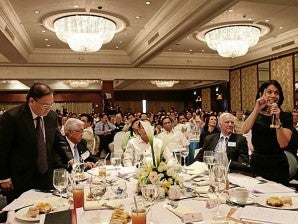 FACE-OFF. Business tycoon Manny V. Pangilinan and environmental advocate Gina Lopez exchange sharp words on mining issues during the open forum of the Conference on Mining’s Impact on the Philippine Economy and Ecology at the Hotel Intercontinental in Makati City on Friday. A visibly peeved Pangilinan takes his seat as Lopez asks for more time to answer him. MVP retorts: I didn’t say that. Now, you’re lying. LYN RILLON

Environmentalists think mining is irresponsible, the industry says it brings development, and never the twain shall meet.

Nowhere was this more evident than at the  mining conference on Friday in which the two sides could not agree on whether responsible mining was possible and whether there are viable alternatives to it.

In an island-ecosystem such as the Philippines, “whether large-scale or small-scale, mining is grossly irresponsible,” Regina Paz L. Lopez, ABS-CBN Foundation Inc. managing director, told the forum.

One of  the high points in the contentious exchange was a clash between Lopez and Philex Mining Corp. chairman Manuel V. Pangilinan over whether there could be viable alternatives to mining in mineralized areas.

Pangilinan and other industry speakers contended that many mining sites were not suitable for agriculture or even tourism. They said this was partly because the minerals present in mineral-rich areas may stunt the growth of vegetation, among other effects.

Gina Lopez: Manny Pangilinan, you said that the areas that are gonna be mined are ugly anyway, that is so not true. It’s not true the areas that are gonna be mined are ugly I’ll tell you about Sibuyan, Sibuyan has the world’s densest forests, the country’s cleanest inland body of water and yet the mining tenement was approved there on top of agricultural land. I have been to Brooke’s Point. I can drink the water in the river and yet the government has approved P1B worth of mining in that place. I have all these people coming to us. So when you say that all these mining tenement places are in these areas that are ugly anyway I really think you need to go and visit it.

Manny Pangilinan:  Regina have you been to Padcal (in Benguet province)? Have you been to Silangan in Surigao Del Norte? Who would go there and develop a tourism site? There’s nothing there. When we, as Gerry [Brimo] pointed out, I wasn’t there, I think when his father entered Philex in Padcal it was deforested, denuded, since that time we’ve planted 7 million trees. We have a self-contained community, we provide free housing, free hospitals, free education up to high school, and we have a post-rehab plan, we set aside each year an amount of money because someday that mine will be closed. There’s a post-rehab plan that we have. Whether by law or not. We care about the people at the point when these guys have to fend for themselves.

Gina Lopez: I just want to say that maybe that place may be nice and I submit it may be nice. When you make a statement that all the areas where there’s gonna be mining is ugly anyway that’s the point.

Manny Pangilinan: I did not say that! Now you’re lying.

The exchange immediately went trending on Twitter and Facebook, as noted by members of the media monitoring the social networking sites.

“This is more interesting than the (Corona) impeachment trial!” noted some observers.

As mining supporters debunked fears of environmental damage and lack of rehabilitation, Lopez said the claims on the harmful effects of mining were true. “Who’s lying here?” she said.

Mining inevitably affects the environment and no amount of tree-planting by mining companies can restore biodiversity in any area that suffers damage from the extractive industry, Lopez said.

Clive Montgomery Wicks, a consultant with the Working Group in Mining in the Philippines, said his group had yet to identify any “responsible” mining operation in the country.

Wicks cited in particular the large-scale $5.9-billion Tampakan copper-gold project in South Cotabato, potentially the biggest in Southeast Asia, as having a huge potential for environmental damage.

Lawyer Christian Monsod, management consultant to  Manila Electric Co. (Meralco), said that while there is potential in the developmental effects of mining, it cannot be carried out without affecting and disturbing natural resources and monitoring the industry is a challenge for government.

Leo L. Jasareno, director of the Mines and Geosciences Bureau, said that despite the challenges, including the lack of personnel to comprehensively monitor the industry, these issues were already being addressed by government.