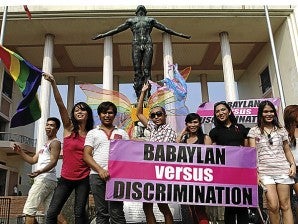 CHANGE IN DILIMAN. University of the Philippines students in Diliman voted Gabriel “Heart” Diño (second from right) as the first transgender chairperson of the university student council. Diño and USC councilor winner Pat Bringas (right) are members of UP Babaylan, the “first and largest” LGBT students’ organization in the Philippines. The photo was taken during the Gay Pride march in UP Diliman in June last year. JIM GUIAO PUNZALAN

Marking a new milestone, students of the premier University of the Philippines in Diliman, Quezon City, elected their first openly transgender chairperson of the university student council (USC).

In elections concluded Thursday night, Heart Diño bested three other candidates, including independent candidate Martin Loon of the UP College of Law and Amancio Melad III of the militant Stand UP coalition.

Before winning the top post in the state university council, she was a popular councilor who headed the USC committee on gender and a leader of the UP Babaylan, a group promoting rights of lesbians, gays, bisexuals and transgender (LGBT) students.

Transgender is an umbrella term for persons whose gender identity and expression does not conform to socially constructed behavior associated with one’s sex at birth.

Danton Remoto, chairman of the national Ang Ladlad party called Diño’s election a “historic moment” and a victory that “opens doors for the LGBT community into the political sphere.”

“We applaud the UP constituency for voting Heart Diño,” he told the Inquirer in an interview.

“The party also lauds the election of Alex Castro, a bisexual woman, as vice chair of the UP Diliman USC,” said Remoto, adding “Ladlad hopes that this is the start of a new diversity that will emerge in mainstream politics.”

According to the Philippine Collegian, the official organ of the UP Diliman students, Diño’s party clinched 13 out of 34 seats in the USC, including six councilor seats and six college representatives. The Student Alliance for the Advancement of Democratic Rights in UP (Stand UP) won 10 seats while the Nagkakaisang Iskolar para sa Pamantasan at Sambayanan sa UP (Kaisa) also got 10 seats.

The Collegian said voter turnout for the campus polls was higher this year at 48.91 percent from last year’s 48.5 percent.

Looking back, Diño said she was initially “a bit confused” as how to conduct her campaign—should she be a proper, formal-looking candidate, or be just her usual fun, easygoing self?

“I decided to just be myself. Embrace yourself, because sometimes you don’t have to fit in. Sometimes, you just stand out,” she said, brushing away  a lock of her straight shoulder-length hair.

Asked if she thought the country’s premier university was ready for a transgender leader, Heart replied: “Well, we are beginning to be more open.”

At the UP College of Science’s Institute of Mathematics, Diño  always identified herself as female. She was often seen wearing jeans and a blouse to class.

But during special programs where she was the emcee, “Heart usually wore a dress,” said college dean Jose Maria P. Balmaceda.

She was always known as Heart. “No one really called (Heart) Gabriel Paolo, you know,” he added.

He recalled “Heart was not the type to draw attention to one’s self and was always quiet in class,” Balmaceda said.

But she stood out as one of their “brighter gems,” he said.

Things were not always as bright for Heart, who admitted she first had to deal with her family’s reaction to her gender, and that of her high school classmates as well.

She said that as a 5-year-old, she already knew she was “a girl trapped in a boy’s body.”

At Claret School, an adviser called up her parents to inform them about their child.

In the end, acceptance of her transgender nature came. “I tried (being masculine), but it’s  not who I am.”

As a transgender adult, going inside restrooms for females can be a test for Heart, who recalled a janitor at a Makati City mall who blocked her path as she was about to enter.

“He told me, ‘you’re not allowed in there, go to the men’s room.’ But I didn’t. So now I avoid going to public restrooms or just use a pay comfort room,” she said.

If a woman raises her eyebrows at her when she uses the female restroom, Heart doesn’t mind because “it is who she is.”

The chair-elect now faces the challenge of holding together different ideologies in the UP student council.

“We have to work together. We must learn how to listen to different points of view,” she said.

Duterte thanks Japan, US for COVID-19 vaccine donations