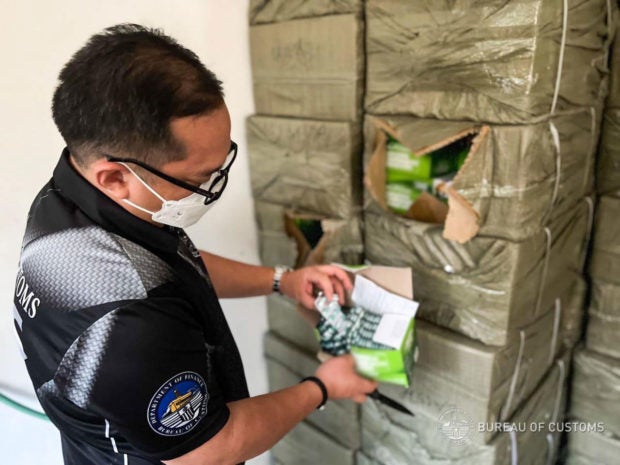 An agent inspects a box of what the Bureau of Customs says are fake medicines – packed in cartons tagged with Chinese characters – that were confiscated in Barangay Marcelo, Parañaque City, on Jan. 5, 2022. (Photo from Bureau of Customs)

MANILA, Philippines — Inject the fake medicines into those selling them, President Rodrigo Duterte told authorities during the taped weekly “Talk to the People” that aired late on Monday.

“The [fake] drugs seized from them,  you keep it for the courts’ intervention. You preserve the body of the crime,” Duterte, speaking in a mix of English and Filipino, said, addressing Deputy Director Oscar Gutierrez of the Food and Drug Administration (FDA).

“Now, if there are already too many of them, my suggestion to the NBI and the CIDG: ‘Tell them [sellers] to keep half of what was confiscated. Let them take it — slowly,” he added.

Duterte said he would take the blame if one of the suspects would die after taking the fake medicines.

“Let them take it. Inject it. If they die, I’m sorry. If they ask who ordered it. Tell them it’s Duterte,” he said.

“I will let you take them or I will inject them in your bodies. If you die or get sick, that’s your problem. Don’t run to me for the problem that you created,” Duterte said.

He was referring to the International Criminal Court where a case of crimes against humanity had been filed against him in connection with the drug war killings.

According to the FDA,  21 out of 926 drug outlets nationwide are suspected of selling fake medicines and diagnostic kits.