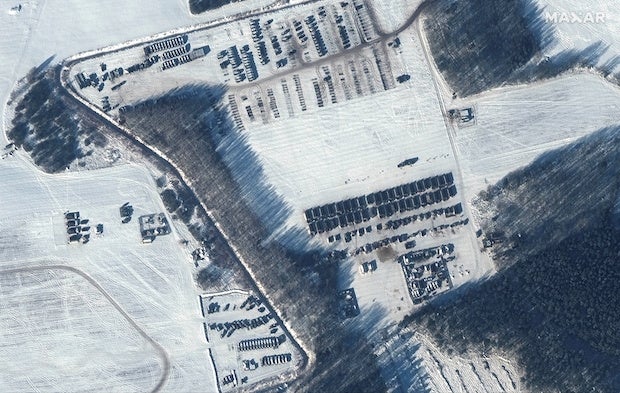 MOSCOW — Satellite images by a private US company published on Sunday showed details of military maneuvres at the Belarus border with Ukraine ahead of joint drills announced by Moscow and Minsk that NATO has called the biggest deployment to Belarus since the Cold War.

Russia and Belarus have said they will hold joint exercises called Union Resolve 2022 on Feb. 10-20 aimed at training to repel an attack on southern borders of their alliance, and Russia has given some details of missiles and warplanes it is sending for the event.

The new deployment and planned exercises are taking place at a time when tensions are high between Russia and the West over Russia’s massing of troops near its border with Ukraine. Western countries have accused Russia of preparing to invade Ukraine while Moscow denies it has such plans.

The images from US-based Maxar Technologies showed that military units armed with missiles, multiple rocket launchers and attack aircrafts had deployed to Belarus at three locations close to the border with Ukraine.

Reuters could not independently verify the imagery.

The Russian defense ministry did not immediately reply to a request for comments. Belarusian military officials did not pick up calls on Sunday.

Maxar Technologies said it had collected images of military hardware near Yelsk, Rechitsa, and Luninets on Feb. 4. All locations are within around 50 kilometers (30 miles) from the Ukrainian border.

The Russian defense ministry said on Saturday that it had sent S-400 missile systems and Su-25 warplanes to take part in the drills. Ahead of the exercises, Russian Defence Minister Sergei Shoigu visited a firing range in western Belarus on Thursday.

NATO Secretary-General Jens Stoltenberg last week called the Russian maneuvres in Belarus the biggest Russian deployment in the area since the Cold War and added that nuclear-capable Iskander missiles were a part of it.