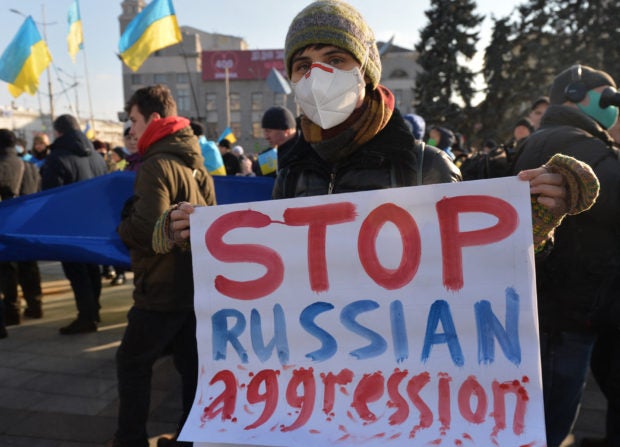 A protester holds a placard during a Unity March amid soaring tensions with Russia, in Kharkiv, eastern Ukraine, on February 5, 2022. – Ukrainian nationalists marched at a rally in Kharkiv, Ukraine’s second city located 30 km from the Russian border, in support of their country amid fears in the West that Russia is preparing for an invasion as it amasses forces at the border. Russia, has repeatedly denied any invasion plans. (Photo by Sergey BOBOK / AFP)

KHARKIV — A Ukrainian flag wrapped around her shoulders, pensioner Iryna Gayeva had a simple message as she demonstrated in second city Kharkiv on Saturday, just 40 kilometers from the Russian border.

“We do not want Russia,” she told AFP, as she joined several thousand people for a “Unity March” called by nationalist groups.

“I was born in Crimea. That’s enough, they’ve already taken a homeland from me. I grew up here, I live here, my parents are from Russia but I don’t want to see any occupiers,” she said.

“This is my home, these are my rules.”

Russia seized the Crimea peninsula in 2014 and began fueling a separatist conflict in eastern Ukraine.

The Kremlin has now massed more than 100,000 troops across the frontier, sparking fears from the West that Russian President Vladimir Putin is planning a major incursion.

Moscow denies it will invade and blames Nato for threatening its security by expanding into eastern Europe.

Kharkiv, an industrial and university centre with a million and a half inhabitants, many Russian-speaking, is more than 400 kilometers east of the capital Kyiv and right next to the Russian border.

Ukraine’s President Volodymyr Zelensky has warned that, given the population’s strong links to Russia, the city could be a prime target for “occupation” if the situation escalates.

There appear grounds for the concern.

In 2014, as Russian-backed separatists took over two other eastern cities of Donetsk and Lugansk, fears swirled that Kharkiv could be the next domino to fall.

Pro-Moscow protesters attacked the regional administration with molotov cocktails, as violence broke out with pro-Ukrainian activists.

Eventually Ukrainian forces managed to stop Kharkiv slipping from Kyiv’s grasp, saving it from getting engulfed in a conflict that has cost 13,000 lives over the past eight years.

And now, those demonstrating insisted that Russian forces would not be welcome in Kharkiv as pro-Ukrainian patriotism has rocketed. 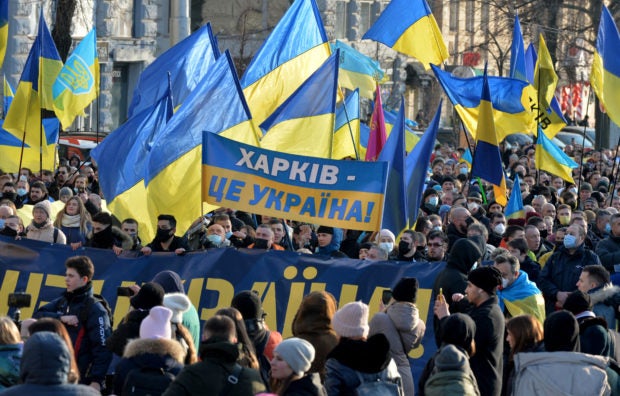 Protesters carry a banner reading “Kharkiv is Ukraine” during a Unity March amid soaring tensions with Russia, in Kharkiv, eastern Ukraine, on February 5, 2022. – Ukrainian nationalists marched at a rally in Kharkiv, Ukraine’s second city located 30 km from the Russian border, in support of their country amid fears in the West that Russia is preparing for an invasion as it amasses forces at the border. Russia, has repeatedly denied any invasion plans. (Photo by Sergey BOBOK / AFP)

“This time there is no panic but anger.”

At her side, Nadia Rynguina is even more categorical.

“The situation has changed, we have an army worthy of the name, we have citizens ready to defend the country,” she explained.

In the event of an intervention, Yury Shmylyov, 79, warned that “it will not be a walk in the park” for the Russian army.

“In 2014, we were afraid to display a blue and yellow flag here, but now look,” he said, pointing at the gathered crowd.

Behind a large banner reading “Kharkiv is Ukraine”, the demonstrators marched between the city’s two main squares in sub-zero temperatures.

They chanted patriotic slogans, sang the national anthem and carried signs thanking Britain and the United States for ramping up arms deliveries to Ukraine.

Galyna Kuts, a political scientist in Kharkiv and a member of the regional legislature, said Zelensky’s warning of potential “occupation” set nerves jangling.

“Everyone was calling each other to ask what to do, where to flee,” she said as she attended the rally.

But after years “living under constant threat of invasion”, she insists resident in Kharkiv have steeled themselves for anything.

“People have changed, they know how to survive,” she said.

Oleksandr Gerasimov has filled up his tank and is ready to evacuate his family if necessary.

But the 39-year-old demonstrator, insists he is “calm” as he does not believe Moscow will risk an attack against Ukraine’s bolstered armed forces.

US warns Russia may stage video as pretext to invade Ukraine

Kyiv calls on Russia to pull back troops