My bad!: Robredo apologizes for technical issues during KBP forum 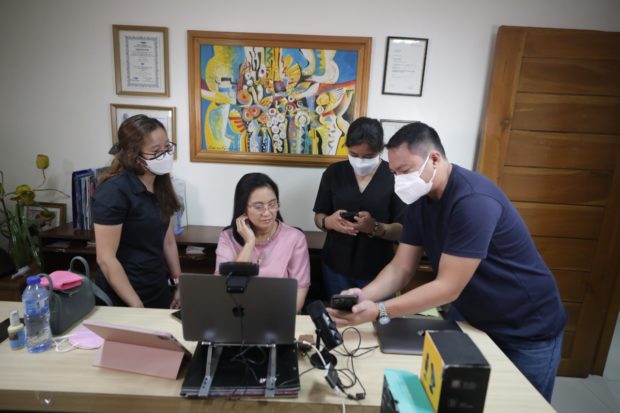 Staff of Vice President Leni Robredo scrambles to get her back on the air after an apparent messy reception during her opening statement at the KBP-hosted forum for presidential candidates on Friday, February 4, 2022. | PHOTO: OVP

MANILA, Philippines — Vice President Leni Robredo has apologized for the technical problems she encountered during a forum for presidential candidates hosted by the Kapisanan ng mga Brodkaster ng Pilipinas (KBP).

Robredo said her team borrowed space at an office near the airport so she could attend the forum via Zoom as they were scheduled to fly back to areas affected by Typhoon Odette (international name: Rai) to bring aid.

Robredo also said that her staff tried to convince her to cancel their other engagements for Friday so they could prepare a better setup for the forum, but she refused and insisted to push through with their commitment to the disaster-hit communities to beat an impending election ban for such activities. The official election campaign for national candidates is set to start on February 8.

The vice president said they decided to push the flight until around noon, after the KBP forum.

“I apologize for the bad connectivity during the forum. The fault is all mine,” she said.

I apologize for the bad connectivity during the forum. The fault is all mine. pic.twitter.com/4ivoXZ2Bnv

She added that she had to listen to the questions through the telephone because of the slow internet.

Again, our apologies. Maraming lessons learned. We will do better next time.

Photos sent by the Office of the Vice President to reporters showed Robredo’s staff scrambling to get her back on the air, after an apparent messy reception during her opening statement at the KBP-hosted forum. As a result, she failed to immediately respond to the questions of the panelists.

‘Buong-buo ang loob ko’: Robredo to run for president in 2022