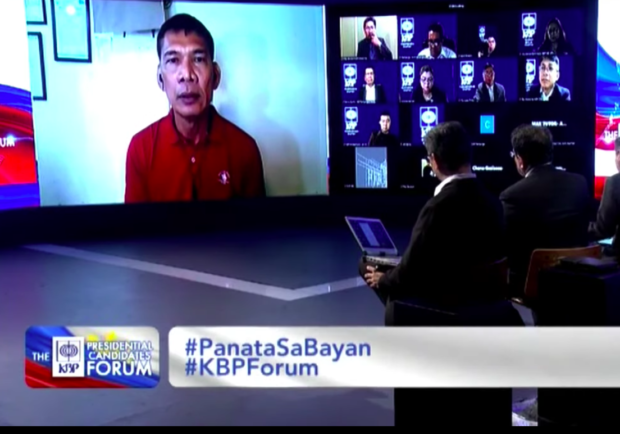 MANILA, Philippines — Presidential aspirant and labor leader Leody de Guzman will seek to address the demands of the communist armed group New People’s Army (NPA) to eliminate any motivation for their decades-long insurgency.

De Guzman was asked during the Panata sa Bayan presidential forum hosted by the Kapisanan ng mga Brodkaster ng Pilipinas on Friday about his plan to end the armed conflict waged by communists in the countryside if he is elected president in the 2022 elections.

In response, he said that he had seen the demands of the NPA, and he believes their reasons are justifiable, especially with true land reform yet to be implemented by any president.

“I intend to meet all the requirements in the NPA’s document, and I have read them all. It was very fair when their demand for real land reform, which was recognized by Marcos, by Cory, and by all presidents, but wasn’t actually implemented,” de Guzman told the panel in Filipin0.

But aside from that, the labor leader noted that the prevailing injustice in the country is the main reason the rebellion is still becoming an option for many people.

“In addition, all presidents and people believe that our country experiences injustices, and when you are wealthy, you are safe. If you are poor like Grandpa Nanding, you are locked up. The people will not stop fighting and taking up arms as long as there is injustice against them,” de Guzman explained.

“So, I believe that if we can meet their demands, the NPAs will run out of reasons to hold onto more weapons. After all, I believe they are not merely holding weapons for the sake of holding them if they are not fighting for something deeply meaningful” he added.

NPA has been waging a guerrilla war for over five decades now, starting from former president Ferdinand Marcos’ martial law regime. It has since developed into an armed force calling for changes in society, from land reforms and fair labor practices.

Peace talks were expected to succeed during President Duterte’s term, given his close relationship with key Communist Party of the Philippines figures like founder Jose Maria Sison, his former professor.

However, mistrust between the two sides — the government claiming that rebels are still doing ambushes despite a previous ceasefire order — scuttled the talks.

READ: No ceasefire with communist rebels’ ever again under my term’ – Duterte