No idle retirement for Rowena Guanzon 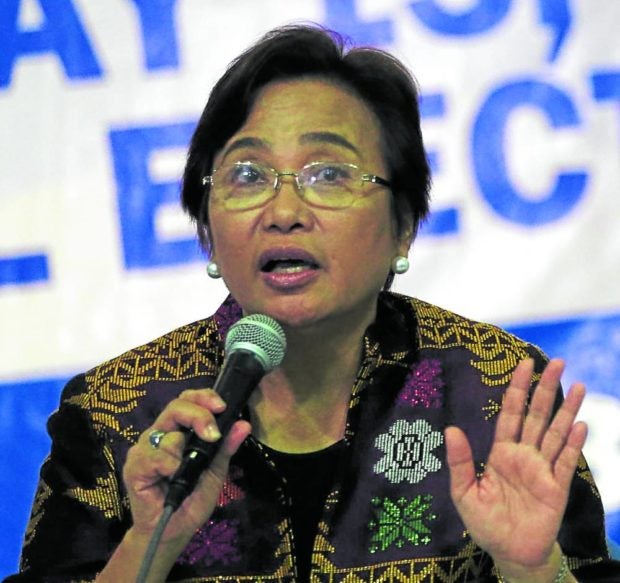 MANILA, Philippines — She may no longer be a commissioner of the country’s poll body, but Rowena “Bing” Guanzon, who retired on Wednesday, won’t simply fade away.

The outspoken 64-year-old native of Cadiz City in Negros Occidental said she would be embarking on a voters’ education campaign.

“The fight against what is wrong and bad should continue,” said Guanzon, who very publicly disclosed her vote in favor of the petitions filed against the candidacy of presidential aspirant Ferdinand Marcos Jr. in the Commission on Elections (Comelec).

Just days before her retirement, she ignited a controversy when she alleged that an “influential and powerful” senator was behind the delay in the release of the resolution on the consolidated petition to disqualify the son and namesake of the late dictator from running in the May 9 polls.

She accused fellow Commissioner Aimee Ferolino, who was assigned to write the ruling on the petition by the First Division, of trying to “defeat” her vote against Marcos Jr. by waiting for her retirement before coming out with the resolution.

Ferolino flatly denied Guanzon’s allegations, saying she was taking her time to avoid mistakes in writing the decision on the case.

Guanzon said Marcos Jr. must be disqualified because he committed an offense that involved moral turpitude, a ground for disqualification, when he did not pay his income tax during his term as vice governor and governor of Ilocos Norte from 1982 to 1985, and also did not pay the fine after his conviction.

Retiring along with Guanzon on Wednesday were Comelec Chair Sheriff Abas and Commissioner Antonio Kho Jr.

All the seven members of the poll body were present at the formal retirement ceremony at the Sofitel Hotel.

None of the speeches referred to Guanzon’s tirades against Ferolino, who thanked the three retirees for their service.

“And I know even if they are retired,” Ferolino said, “they are just a phone call away, right Chair, Comm Kho, Comm Bing?”

“I hope that the friendship we have started will not end with you leaving the commission,” she added.

Guanzon also did not allude to her dispute with Ferolino but omitted the commissioner’s name from her thank-you speech.

“Senior Commissioner (Socorro) Inting and Commissioner Marlon Casquejo and the senior staff, deliver an election on May 9, 2022 (that is) independent, impartial, orderly and efficient,” she said.

Inting, a former appellate court justice and the most senior of the four remaining commissioners, will be the acting Comelec chair until President Duterte fills up the vacancy.

Guanzon, who served in the Comelec for seven years, told the Inquirer that she was also writing a book on “jurisprudence and procedure on election law.”

The delay in the submission of the resolution on the disqualification cases against Marcos Jr., she said, showed that the Comelec needed reforms in its internal rules.

“In the qualifications for commissioner, I think the bar should be raised higher. That will require constitutional amendments. Qualifications should include a certain number of years of law practice in courts,” she said.

“Maybe the nominees should go through the Judicial and Bar Council (JBC)—to determine their knowledge of the law,” she added.

Guanzon also stressed the need for gender equality in the appointment of commissioners.

She told the Inquirer over the weekend that she was on the shortlist for the position of Deputy Ombudsman for Visayas.

This was confirmed by a Dec. 17, 2021, letter from the JBC to Mr. Duterte, which was made available to the media only on Wednesday, naming her as one possible successor to Deputy Ombudsman for the Visayas Paul Elmer Clemente, who retired on Nov. 6, 2021.

In addition to Guanzon the two other candidates for the position are Beda Angeles Epres and Dante Flores Vargas.

Guanzon won praise and support from Sen. Manny Pacquiao, who is also running for president.

In a statement, the former world boxing champion thanked Guanzon for “her fight for truth and justice” and for standing for what is right in the disqualification petitions against one of his rivals.

“She is a rare breed. I fully support her mission. And I call on all Filipinos to stand by her,” Pacquiao said.

On Tuesday, leaders of various Christian denominations called on the Comelec to immediately release the decision on the disqualification cases against Marcos Jr. and to investigate Guanzon’s allegations that politics was behind the delay.

“The integrity of our democracy and our people’s confidence in it is on the line,” they said in a statement. “The Comelec should rise to the dignity of judgment, where ‘justice is blind’ and based on the truth that is presented.”

Various civic and activist groups on Wednesday expressed support for the feisty retiree and also urged the Comelec to release the ruling on the disqualification petitions against Marcos Jr.

The Bayan secretary-general, Renato Reyes, thanked Guanzon for “taking a principled stand on the Marcos disqualification case and for exposing the maneuvers inside the Comelec” even though her opinion to disqualify Marcos was boxed out.

“Her exposé deserves an immediate investigation from both the Comelec and the Senate,” Reyes added. “It is both tragic and outrageous that her vote will not be counted because she is set to exit the Comelec.”

Guanzon out of Marcos DQ cases; no decision yet

Comelec has a leadership problem — Guanzon