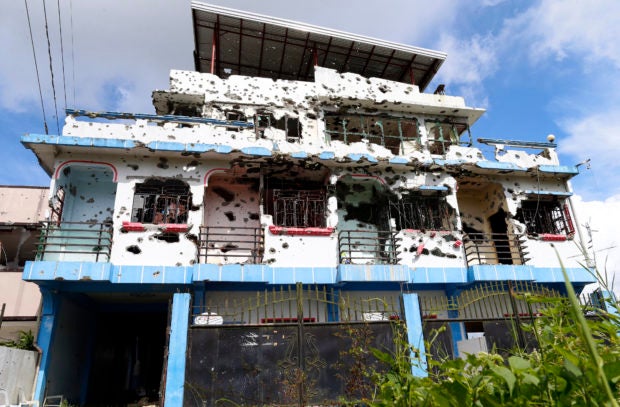 This picture, taken on Oct. 28, 2017, shows a bullet-riddled three-story apartment in Marawi City where IsnilonÊ Hapilon, the purported emir of ISIS in Southeast Asia, was staying before the siege erupted on May 23, 2017.  (File photo by JEOFFREY MAITEM / Inquirer Mindanao)

MANILA, Philippines — The House of Representatives adopted on Thursday the Marawi compensation bill of the Senate, which aims to provide monetary aid to the victims of the siege of the city, bringing it another step closer to becoming a law.

During Wednesday’s session, the lower chamber adopted Senate Bill No. 2420 as an amendment to House Bill No. 9925. Since the House adopted the Senate version, it will do away with the need to hold a bicameral conference committee meeting.

It now only needs to be signed by President Rodrigo Duterte to become a law.

If enacted into law, the bill would create a Marawi Compensation Board to facilitate the tax-free payment of reparations to individuals displaced by the Marawi siege.

The compensation covers “qualified claimants” who lost their residential and commercial properties due to the conflict between the Armed Forces of the Philippines and terrorist groups back in 2017 in Marawi City.

The measure also grants private property owners a “replacement cost” for loss or destruction of property, which shall be based on the current market value of the improvements and structure.

“We appeal to President Duterte to make into law the Marawi Compensation Bill. The people of Marawi need to move on from the nightmare that has continuously ravaged their lives long after the Marawi Siege ended in 2017,” Hataman said in a statement, in a quote that was in a mix of English and Filipino.

“They could no rise up and return to their lives if we don’t help them rebuild their houses and replace their destroyed possessions,” he added.