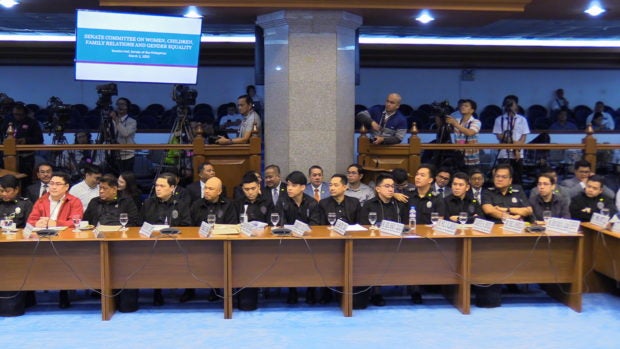 The upper chamber adopted Committee Report  No. 542, which was prepared by the Senate women committee led by Senator Risa Hontiveros after nearly two years of investigation.

Before its plenary adoption, the report was signed by 11 senators.

“The unabated entry into the Philippines of [Chinese] nationals has been facilitated by a multi-billion peso industry divided into multiple revenue streams,” the report read.

Two of the “major revenue streams” are the supposed kickbacks from the “pastillas” and visa upon arrival (VUA) scheme, allegedly totaling P40 billion, according to the report.

Hontiveros first exposed the “pastillas” modus in February 2020. At the time, she presented a video of an immigration officer escorting Chinese nationals to the Bureau of Immigration’s (BI) inner office, seemingly validating the Chinese nationals’ identity against a list with a supervisor.

She also showed screenshots—provided for by one of her panel’s whistleblowers—of Viber groups containing names, flight details and photos of the “VIP” Chinese nationals. Hontiveros’ panel presented two whistleblowers—immigration officers Alex Chiong and Dale Ignacio during the inquiry.

“These Viber groups were run by the chat administrators who were also employees of the BI and who directly received these names from BI officials referred to by Chiong as ‘bosses’ or “Chinese suppliers who in turn received them from foreign syndicates and travel agencies,” Hontiveros said before the report’s adoption.

“Upon the arrival of the foreign nationals in the airport, those immigration officers that are involved in the scheme are under instruction to allow them entry into the country without instituting the necessary checks, screening, or profiling as is standard for arriving non-Filipinos,” she added.

“The initial objective of this Committee was simple: to examine the costs on women and children of POGO operations in the country. The hearings, however, have evolved and have taken a life of its own, exposing dimensions of the issue far beyond the original aim and purpose of the Committee,” the report further read.

“And if this Committee has managed to expose the corruption and rottenness that have compromised our borders and render Filipino women and children vulnerable to harm, it has also provided a platform for the good and the just in our citizens,” it added.

READ: Sex on the menu for Pogo workers