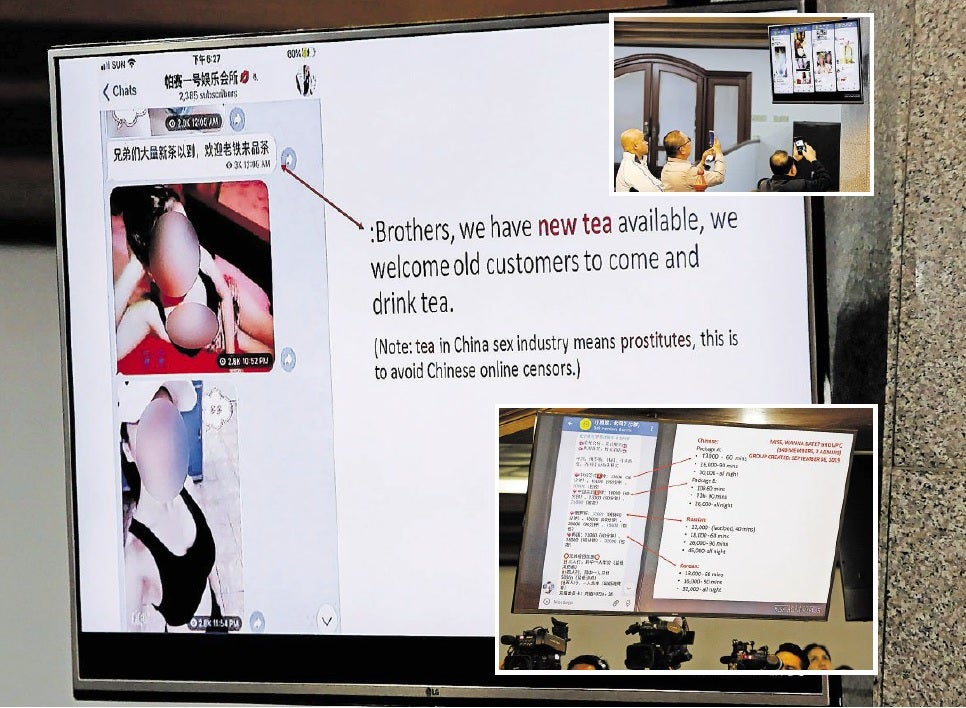 DIRTY GAME Popular online chat apps are used to prostitute women to Chinese workers in the online gaming industry as seen in these screenshots of secret group conversations. Operators charge from P3,000 for a 40-minute tryst to up to P45,000 for an all-nighter. Sen. Risa Hontiveros opened a hearing on Tuesday on the trafficking of Filipino and foreign women —LYN RILLON

New prostitution rings have emerged in the country catering mostly to Chinese nationals, and they operate like an online food delivery service that offers a detailed menu of various sexual favors from women—some of them underage—who are sent to the customers’ hotels or houses.

The rise of this kind of operation that prostitutes foreign and Filipino women came with the proliferation of Philippine offshore gaming operators (Pogos), which are run by and cater mostly to Chinese nationals, a top National Bureau of Investigation official told a Senate hearing on Tuesday.

Sen. Risa Hontiveros, who opened the hearing on reported prostitution for Pogo workers, said the issue gave rise to the question of whether the economic benefits from online gambling operations hosted by the country were worth the social costs.

Hontiveros said she would consider seeking the regulation, and maybe even the suspension, of their operations “because they attract criminals into our country.”

“Based on the experience of the NBI, we only experienced these kinds of activities when Pogo was created, and a lot of Chinese employees of Pogos are the ultimate clients of these prostitution dens,” De Guzman said.

“If that’s true, then we have to do something about it,” Panelo said. “The PNP will lead it because it’s a crime.”

Hontiveros presented screenshots of chat group conversations in the Chinese language on online platforms, such as WeChat and Telegram, where various sexual services from Chinese, Russian or Korean women were offered using some code words to avoid detection from authorities.

In one chat group called Miss, Wanna Date?, which supposedly had 349 members, the price to be paid depended on how much time a client would spend with a woman.

Other chat groups shared photos of women in different states of undress. They used the word “tea” to refer to the prostitutes to evade Chinese online censors.

These women were also called “new cars” who were highly experienced and able to perform in many styles and positions.

“It’s like Grab Food—there is a menu, prices, and the women would be delivered to your hotel or condo,” Hontiveros said, referring to the online food delivery service.

She said volunteers infiltrated the secret online Chinese chat groups and took screenshots of their conversations.

Filipino women were also being prostituted, according to one 15-year-old girl who had escaped last September from her employers—a Filipino woman married to a Chinese man.

The girl, who used the name Carina when she testified via a video hook up between the hearing room and another location in the Senate building, said she was recruited by a friend to work as a massage therapist.

But it turned out that her services included sex with her foreign customers, mostly Chinese. She said she was dispatched to the homes of customers who paid her P3,000 to P7,000, but half of that amount went to the couple. 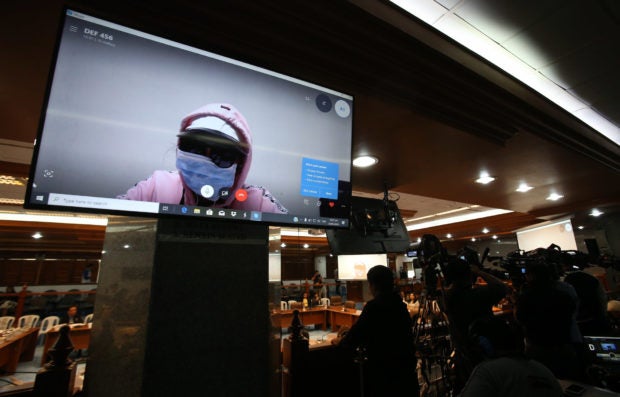 VICTIM RECALLS ORDEAL A 15-year-old Filipino girl who used the name Carina testified in a Senate hearing on Tuesday that she and other women had been promised work as massage therapists but ended up giving sexual favors to foreigners, mostly Chinese nationals, in a new prostitution racket. She escaped from her employers—a Chinese man married to a Filipino woman— last September. —PHOTOS BY LYN RILLON

Maj. Gideon Ines, chief of the Makati Police Investigations Unit, said the prostitution rings used the chat groups and catered only to foreigners to avoid detection.

Some of them rented out entire floors of a hotel to use as their prostitution dens, he said.

Ines urged hotel owners to keep tabs on their guests and to report to the police suspicious activities, such as groups of women with long-term bookings.

“If you’re really helpful and patriotic and you know that groups of women are there—you know how they look, they’re young and sexy—you should report them,” he told reporters after the hearing.

Sherryl Loseño, executive director of the nongovernmental group Voice of the Free that helps trafficked women and had sheltered Carina, said recruiting and “marketing” women online were the new means of prostituting them and providing massage services was the usual front.

The foreign women lured into prostitution tend to hold tourist visas, she said.

Hontiveros said the visa-upon-arrival scheme could be a factor in helping traffic Chinese women for prostitution in the Philippines.

Grifton Medina, chief of the Bureau of Immigration Port Operations Division, said the Chinese nationals who used the visa upon arrival in the Philippines accounted for only 4-5 percent of the 1.8 million who traveled to the country last year.

Others had tourist or special visas, he said.

Hontiveros plans to invite Chinese officials to the next hearing where she will look at trafficking and prostitution as an industry and as a business. —WITH A REPORT FROM JULIE M. AURELIO