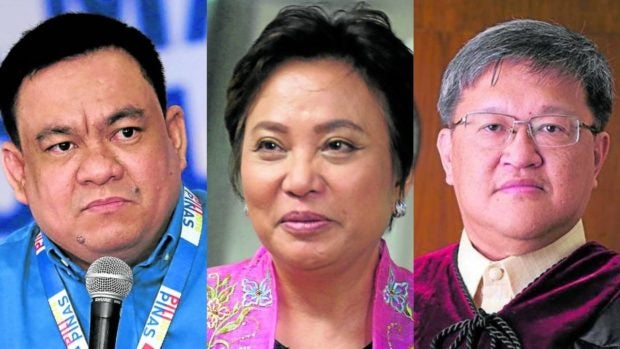 The three Comelec officials, sporting their black and red robes, were honored during a retirement ceremony at the Sofitel Philippine Plaza Manila, three months before the national and local elections in May.

During his speech, Abas described the Comelec staff as among the most dedicated public servants in the country.

(It is true that you are among the most skilled and most dedicated public servants in the country. That is why it is an honor to serve with you, our beloved employees.)

He also thanked his family for supporting him in his stint at the poll body.

(I would like to thank my family because they have let me do these things even if I had to be away from them. The seven years I spent serving on our commission were also seven years when I did not spend time with my family. Thank you for your sacrifices and support for me.)

“Sa huling pagkakataon bilang inyong chairman, maraming maraming salamat po (For the last time as your chairman, thank you very much). Sheriff Abas is now signing off,” he said as he ended his speech.

President Rodrigo Duterte appointed Abas as Comelec Chairman in 2017. Then 39 years old, he was the youngest and the first Muslim to be appointed at the helm of the Comelec.

Meanwhile, Guanzon, who former President Benigno “Noynoy” Aquino III appointed as Commissioner in 2015, shared that she will retire with a “grateful heart.”

“I retire with satisfaction that I have made my parents proud and I have enjoyed all your company even when we have disagreed. And I think that all in all, you will not forget me, not only because of my colorful personality but because of what we have shared together,” the feisty lady commissioner said.

Kho, for his part, calls his stint at the Comelec a rewarding and unforgettable experience. Duterte appointed Kho to the poll body in 2018.

“Despite all the stress and stakes, it has been the most rewarding and enjoyable experience,” he said.

The three commissioners retired amid public unease over the disqualification cases against presidential aspirant Ferdinand “Bongbong” Marcos Jr. that the Comelec’s First Division is handling. To recall, Guanzon said she believes that her fellow Commissioner Aimee Ferolino was “acting in a conspiracy” with a senator to delay the resolution of the consolidated cases. Ferolino, the ponente in the case, has since denied this claim.

During the retirement rites, the commissioners did not mention the disqualification cases. Ferolino, in his speech, even thanked the three senior commissioners for their service to the public.