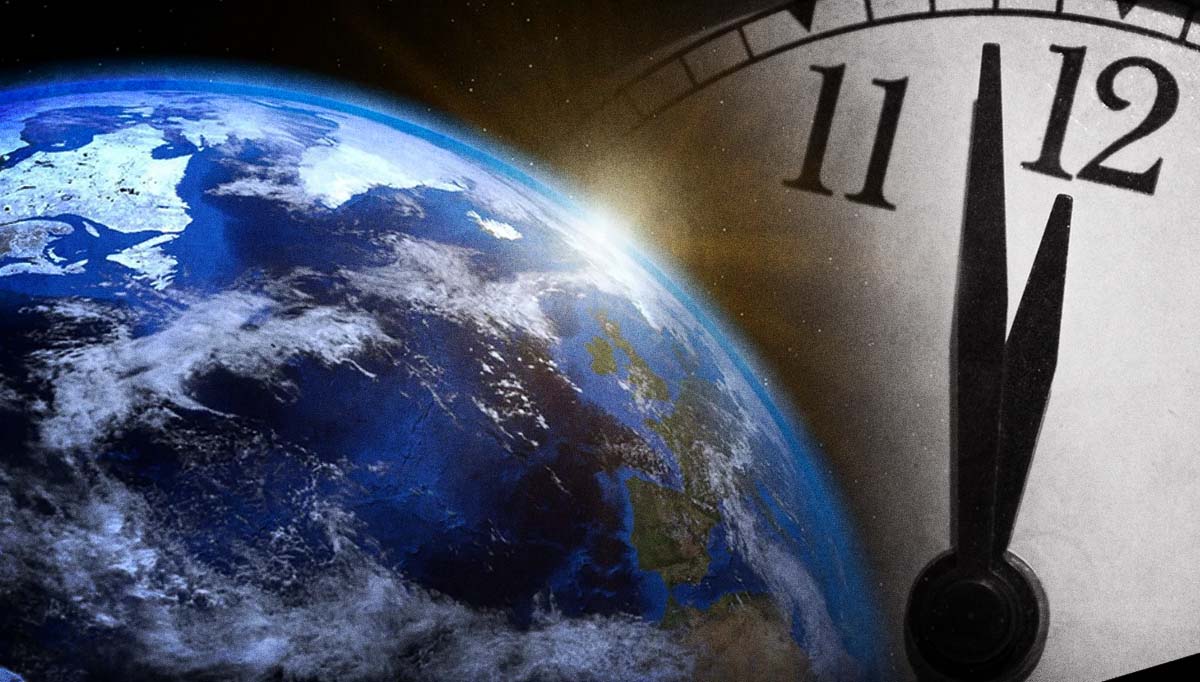 MANILA, Philippines—The symbolic Doomsday Clock, a metaphor to warn people about how close humanity is to destroying the planet, was set again at 100 seconds to midnight—midnight being the world’s end.

For the third consecutive year since 2020, the clock has been alarmingly set at that same time. This was the closest it has ever been to midnight or world catastrophe than at any period since the Cold War. 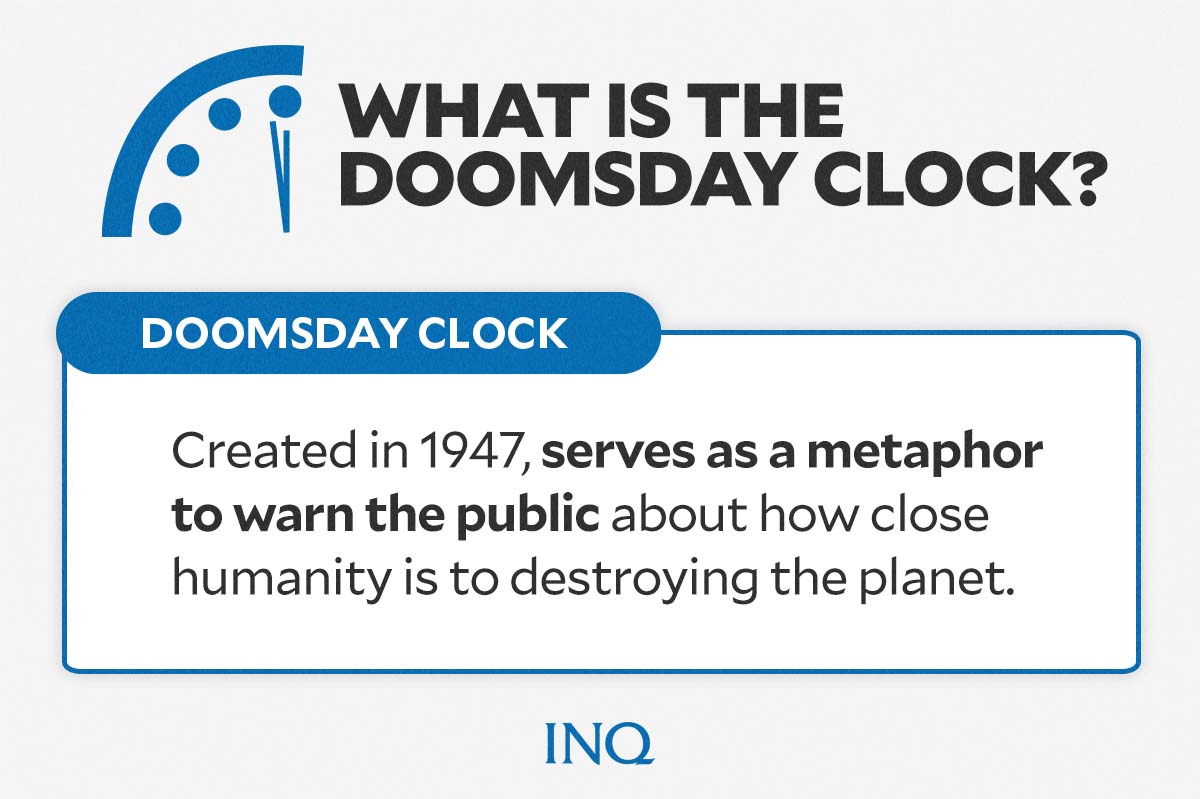 “The Doomsday Clock is set every year by the Bulletin’s Science and Security Board (SASB) in consultation with its Board of Sponsors, which includes 11 Nobel laureates,” Mecklin explained.

“The Clock has become a universally recognized indicator of the world’s vulnerability to catastrophe from nuclear weapons, climate change, and disruptive technologies in other domains,” he added.

The clock started at seven minutes to midnight in 1947, with the assessment that was driven mainly by “the prospect that the United States and the Soviet Union were headed for a nuclear arms race.”

In 1953, the clock moved to two minutes. This was announced in the publication, stating that: “The hands of the clock of doom have moved again. Only a few more swings of the pendulum, and, from Moscow to Chicago, atomic explosions will strike midnight for Western Civilization.”

In 1991, the clock was set 17 minutes to midnight—the farthest from the looming apocalypse compared to any time period since 1947. 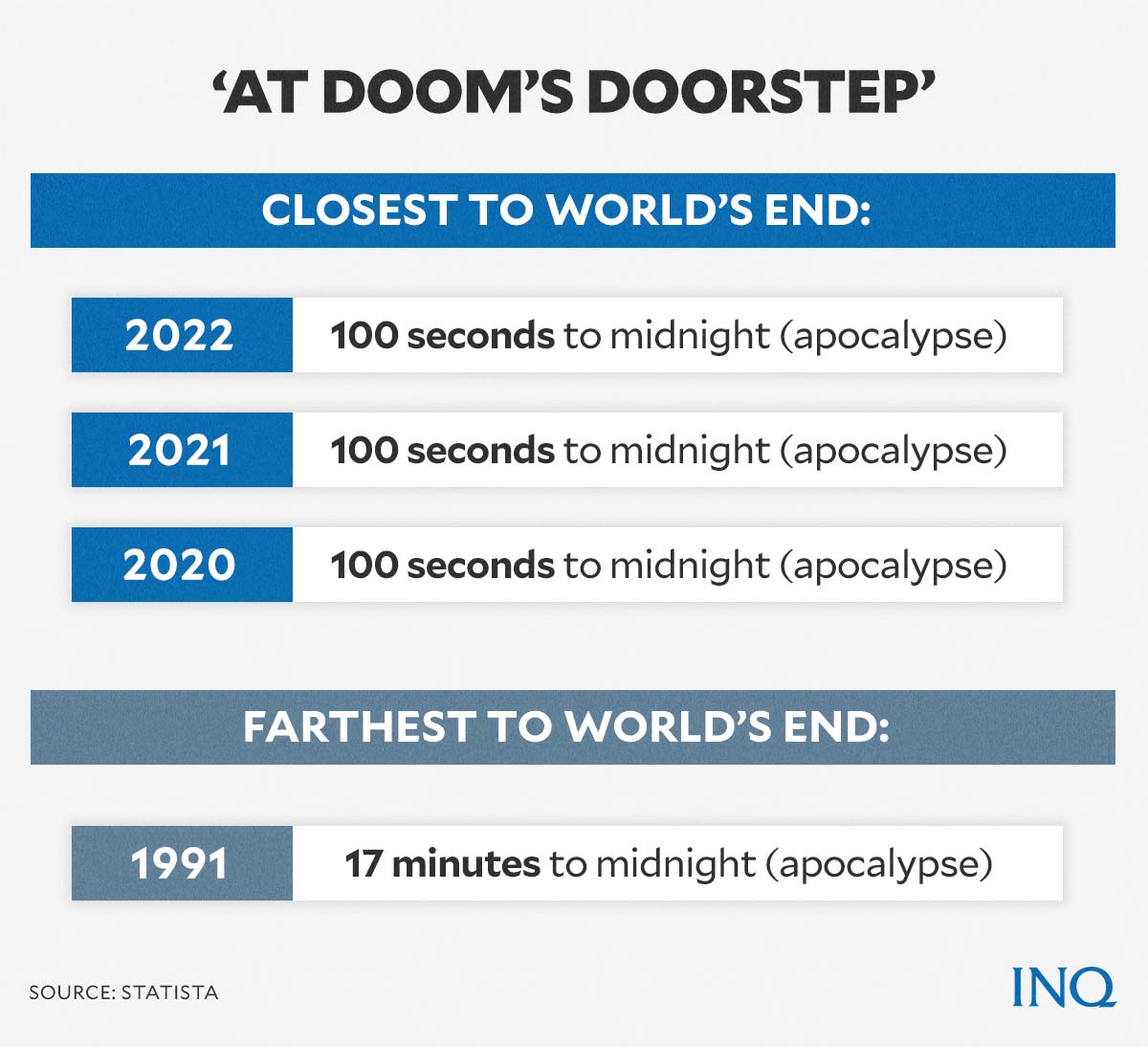 While experts from the Bulletin acknowledged the positive impact of the leadership change in the United States last year, they said it was “not enough” to “reverse negative international security trends” which occurred and threaten nations across the globe in 2021.

According to the Bulletin, the changes in US policies made under US President Joe Biden’s administration have, in some ways, made the world safer.

It also noted that the changes in the US administration have brought hope that “what seemed like a global race toward catastrophe might be halted” and even reversed.

Some of these policies, according to the Bulletin, were:

“Perhaps even more heartening was the return of science and evidence to US policymaking in general, especially regarding the COVID-19 pandemic,” said the SASB. 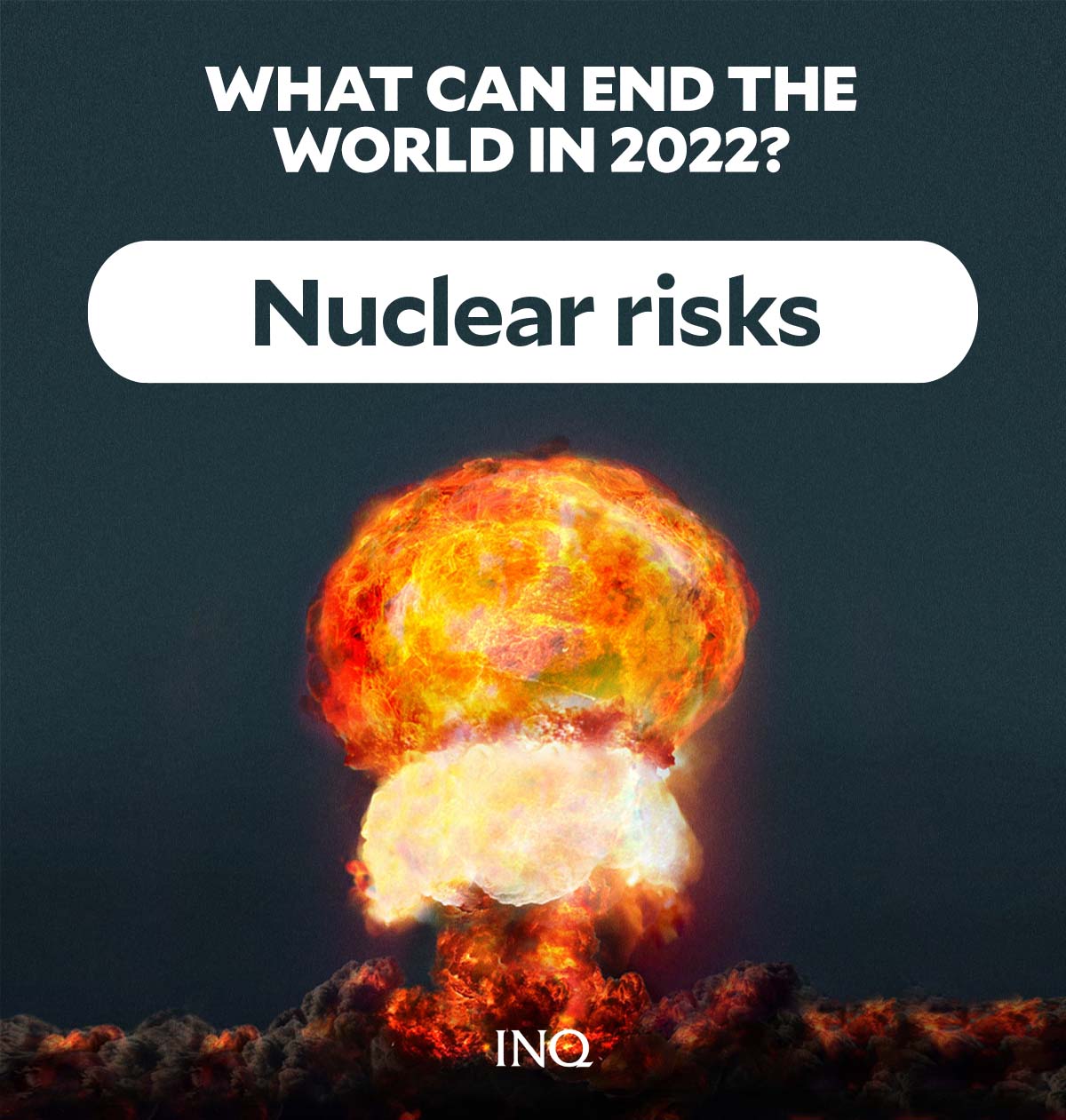 “A more moderate and predictable approach to leadership and the control of one of the two largest nuclear arsenals of the world marked a welcome change from the previous four years,” it added.

However, with threats—continuing tense relations between the US on one side and Russia and China on the other, climate change, future biological threats, and the dangers of technology in the age of disinformation—the world remained far from safe from destruction.

“The members of the Science and Security Board find the world to be no safer than it was last year at this time and therefore decide to set the Doomsday Clock once again at 100 seconds to midnight,” the SASB said.

“This decision does not, by any means, suggest that the international security situation has stabilized. On the contrary, the Clock remains the closest it has ever been to the civilization-ending apocalypse because the world remains stuck in an extremely dangerous moment,” it added.

“In 2019 we called it the new abnormal, and it has unfortunately persisted.”

Despite positive developments in nuclear policies, which mainly involved the US, there were still events last year that have pushed a rise in nuclear risks.

One of the biggest threats flagged by experts from the Bulletin was the tense relations between the US, Russia, and China, all of which are engaged in “an array of nuclear modernization and expansion efforts.” 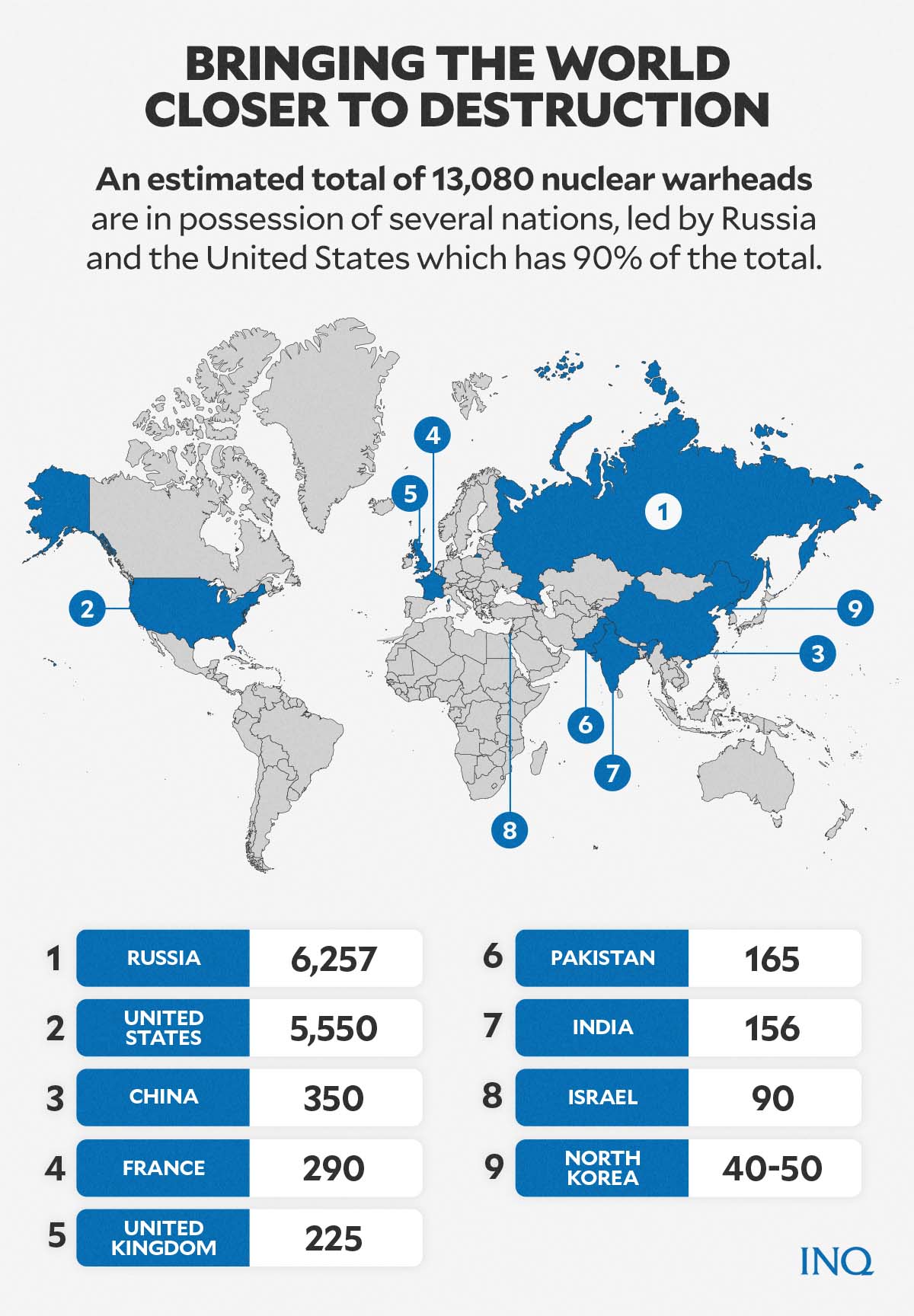 The report, which cited commercial satellite images and analysis from the James Martin Center for Nonproliferation Studies in Monterey, California, said that there were 119 nearly identical construction sites that had similar features to the existing launch facilities for China’s current arsenal of nuclear-tipped ballistic missiles.

In its annual report to Congress, the US Department of Defense said that “over the next decade, the PRC aims to modernize, diversify and expand its nuclear forces.”

“The PRC (People’s Republic of China) is investing in, and expanding, the number of its land, sea, and air-based nuclear delivery platforms and constructing the infrastructure necessary to support this major expansion of its nuclear forces,” the report stated.

The experts from the Bulletin likewise mentioned the three nation’s push to develop hypersonic missiles, as well as the anti-satellite tests conducted by several other countries.

These threats and trends, according to the Bulletin, could potentially mark the start of a new arms competition if not restrained.

The outcome of these possible nuclear conflicts, as described by an article published by Vox, would be “as predictable as it is unthinkable.”

The report detailed that for a city with around four million people, the combined heat and pressure wave from a single 800-kiloton warhead—“which is the yield of most of the warheads in Russia’s ICBM arsenal”—could instantly kill 120,000 people.

More people would die during firestorms and radiation fallout following the initial impact of the nuclear attack.

Also included in the nuclear tightrope, which has helped place the world seconds away from doom, was the nuclear tests and unconstrained nuclear and missile expansion by North Korea.

Last Jan. 31, North Korea confirmed that it had launched a Hwasong-12 ballistic missile, its biggest nuclear-capable missile since 2017.

Moving away from doomsday

According to Mecklin, the Bulletin’s decision to keep the Doomsday Clock at 100 seconds to midnight sends a clear message to the world: “We need to back away from the doorstep of doom.”

In order to do so, the Bulletin recommended some practical steps to protect humanity from the major global threats, including:

“Without swift and focused action, truly catastrophic events—events that could end civilization as we know it—are more likely. When the Clock stands at 100 seconds to midnight, we are all threatened,” said Mecklin.

“The moment is both perilous and unsustainable, and the time to act is now,” he added.