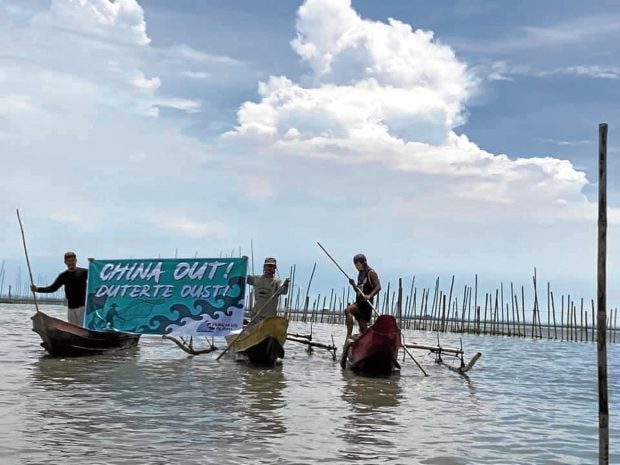 FILE PHOTO Fishermen belonging to the militant group Pamalakaya expressed their dismay over the way the government is handling the territorial dispute with China in the West Philippine Sea. —PHOTO COURTESY OF PAMALAKAYA

MANILA, Philippines — A group of fisherfolk on Sunday endorsed the tandem of Vice President Leni Robredo and Senator Francis Pangilinan, who are vying for president and vice president, respectively, in the 2022 elections.

“We will be rooting for the Robredo-Pangilinan tandem on the basis that out of all the front runners in the national elections, only these two candidates have taken up the issues raised by the people, including the fishing sector’s specific demand to uphold the national sovereignty and protect the Filipino fishers in the West Philippine Sea,” said Fernando Hicap, Pamalakaya national chairperson, in a statement.

“This political unity is a welcome development for the people’s growing resistance against the imminent return of a Marcos and the extension of Duterte to Malacanang,” the former Anakpawis representative continued, referring to former Senator Ferdinand “Bongbong” Marcos Jr. and President Rodrigo Duterte’s daughter Sara Duterte-Carpio who are also gunning for president and vice president, respectively.

Pamalakaya said that it will continue to present their demands to Robredo and Pangilinan, such as “severing from liberalization policies on agriculture and fisheries, protection of coastal communities and fishing grounds from conversion and privatization, abolition of the National Task Force to End Local Communist Armed Conflict, among other human rights abuses committed by the present Duterte regime.”

“The Robredo-Pangilinan tandem is morally and politically obliged to accommodate every issue that would be raised by the marginalized sectors including but not limited to reclaiming the West Philippine Sea from China, ending the country’s reliance on importation, and justice to our colleagues who have been victimized and communities that have been ravaged by Duterte’s fascism,” Hicap pointed out.

“This justice should be in a form of accountability and dismantling of all the machineries established under the Duterte regime,” he added.

Hicap also noted that their support for the presidential and vice presidential hopefuls is not only based on common political platforms.

“Our support for the Robredo-Pangilinan camp, besides being based on common political platforms, is accompanied with a continuing engagement that will develop a unified position on comprehensive issues that represent the democratic interests of the Filipinos and our national sovereignty,” he said.