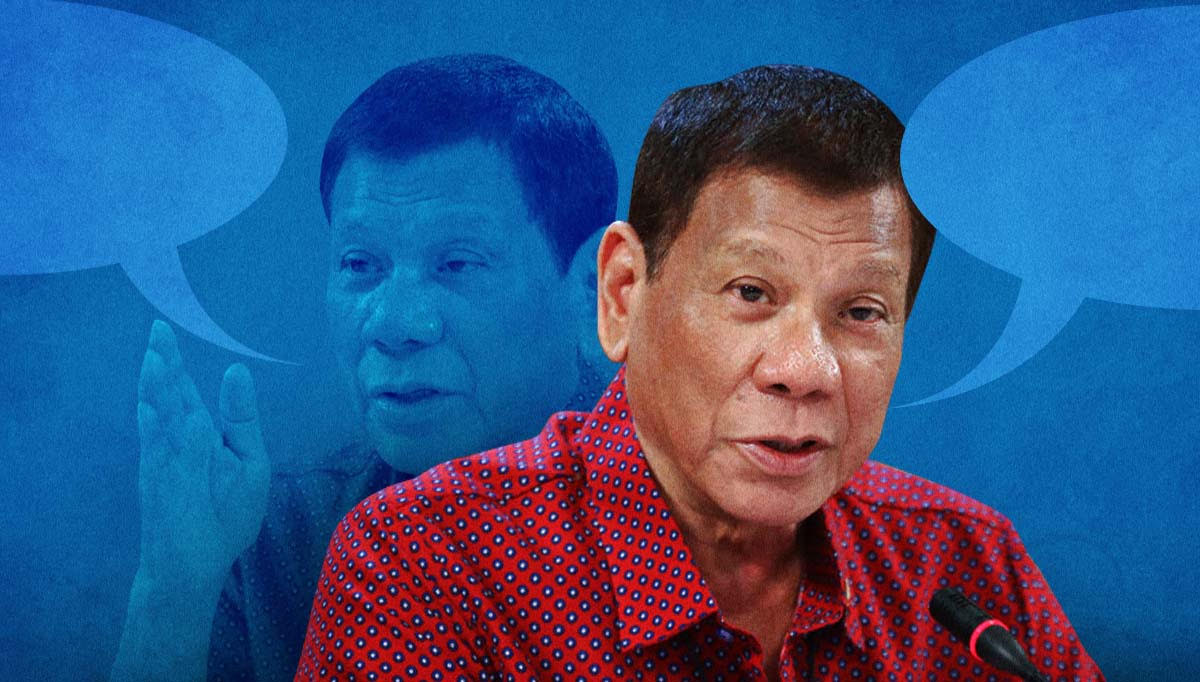 MANILA, Philippines—Several times already, President Rodrigo Duterte uncorked what could be considered as blind items, akin to gossip, about politicians and presidential aspirants whose identities only the President knows.

While the penchant for a striptease act baffles many, analysts see it as a way for Duterte to keep his place on the political table and give an impression that he’s still “in control” even as his days as president wane.

Prof. Rejene Lakibul, chairperson of the Department of Political Science of the University of San Carlos, said this was possibly one of the reasons behind Duterte’s blind items against individuals seeking to replace him.

This, as Sen. Bong Go, his closest confidante, decided to withdraw his bid for the presidency while Davao City Mayor Sara Duterte, Duterte’s second eldest child, paired with the son and namesake of the late dictator Ferdinand Marcos.

“It’s his attempt to continue controlling the outcome of the elections and the way to do it is to preserve political relevance. How do you keep relevance? You maintain your relatability to the people,” Lakibul told INQUIRER.net.

Last Jan. 25, highlighting that “I need to bring this up because we are talking about elections,” Duterte said a presidential aspirant “really can’t be a president” while one, he said, was “too corrupt.”

He explained that since he is the President, “I get information from everybody, and not only that, from personal experience. I saw it.” Duterte said a presidential aspirant is not fit because when inebriated, this person talks nonsense.

He likewise said a “corrupt” individual is currently in the presidential race: “People think the person is too clean, however, those who transacted with this person, including the Chinese, say this person is too corrupt.”

Another individual who wants to become president, he said, is “too inexperienced,” saying that this person is not fit because of statements that were wrong and lack of “fundamentals.”

Lakibul said Duterte’s penchant to dish out blind items is “really part of his personality” as he has been consistent. Last year, he launched strikes against a “call boy” local executive and a “cocaine user.”

Prof. Carmel Abao, of the Department of Political Science of the Ateneo de Manila University, told INQUIRER.net that the President is being on brand when he belts out blind items.

Last Aug. 9, Duterte ranted about a local chief executive whom he said had the training of a “call boy” and had a past scandalous life that included wearing bikini briefs in photos shown in public.

“Is that what you want? His training is like being a call boy. Taking his clothes off, taking pictures while wearing a bikini and then removing the garter […] Don’t be fooled by the drama of those who speak,” he said.

On Nov. 18, 2021, the President said in Mindoro that an individual who is seeking the presidency, a male from a wealthy clan with a well-known father, had been taking cocaine.

“I will not make it clear now, there has been a presidential candidate who had been taking cocaine […] He’s the son of a rich family. That’s why I’m asking myself, what did that person do?” he said.

“What contribution has he made for the Philippines? That’s the only thing I want to ask. Why are Filipinos so crazed to back this person,” he said while asking the people to “find out” themselves.

While Duterte did not name the cocaine-using presidential aspirant, his blind item let out a flurry of reactions from nearly all presidential candidates and a frenzy of drug tests.

Marcos’ camp, amid widespread speculation that he was the one being referred to by Duterte, said, “We don’t feel alluded to. We’re just concentrating on what we’re doing. We only have the highest respect and recognition for the President.”

On the same day that he dropped the cocaine bomb, Duterte likewise said an individual seeking the presidency has the character of a “very weak leader,” except for the name. “His father, how about he himself? What has he done?”

Prof. Francisco Magno, of the Department of Political Science of the De La Salle University, said blind items are the thing of “showbiz gossip” but these draw attention to the President as one who can read character.

He told INQUIRER.net that slight hints are given so that it will keep people asking. This way, he becomes a relevant figure in the campaign as people wait for the great reveal.

Lakibul said the President has his way of connecting with the people, especially the masses. “It’s by trivializing things,” he said, explaining that when there’s a blind item, people get interested.

“It’s one way to make people interested and listen to you,” he said.

For Abao, “this has always been one of his ways of drawing public attention to himself and/or drawing the public to some personal agenda and that is usually his way of testing the waters.”

She said Duterte made public the idea that a presidential aspirant had been taking cocaine, most likely to assess Go’s chances against that individual. However, when that did not gain grip, he ceased from repeating the blind item.

“This recent blind item about a corrupt presidential aspirant is probably for the same purpose—to test how people will react,” said Abao.

“Since his drug use card didn’t work, he’s probably testing whether a corruption card will work on some other presidential candidate,” she said.

For Abao, Duterte would have wanted either Go or Sara to become the next president, but “since that didn’t work, one can see how ‘unhinged’ he has become.”

She said this is possibly the context of his blind items: “It seems like he doesn’t have a clear or firm plan for the election because it’s now beyond his control.”

“So I think he’s just resorting to his usual ‘shock and awe’ tactic. He’s leveraging old ways that made him popular,” said Abao. However, she likewise stressed that it is “not a good political practice.”

“Having a President who sows intrigues instead of accurately diagnosing political problems and resolving them effectively. Blind items don’t lead to any resolution,” she said.

“They only hype up the personalities involved.  What the President is doing is clearly diminishing the integrity of the Office of the President,” Abao said, stressing that Duterte should not make random allegations.

“It clearly undermines due process. The accountability of public officials is supposed to be a  matter of institutional processes. Judgment about the proper behavior and conduct of public officials should be arrived at through mandated investigation and proper resolution mechanisms,” she said.

Deserving of a response?

Although the PNP job would have been easier if it had simply asked Duterte to tell police the name of the cocaine-user, Carlos

With Duterte’s recent blind item regarding a “corrupt” presidential aspirant, the PNP also reacted valiantly, initiating a “background check” of several presidential aspirants although it would have been easier if police simply asked Duterte to identify who he was referring to.

READ: PNP checks all presidential candidates in search of the ‘most corrupt’ bet

For Lakibul, however, people should ask: Who will benefit from these investigations which definitely require resources?

“If they say that they’re doing all these for the purpose of confirming what the President said, I think that shouldn’t be done by them unless there’s a directive from the President,” he said.

Pacquiao on looming Duterte exposé vs presidential bets: Let’s just wait for it

Robredo: Info on ‘corrupt’ presidential bet can help voters decide but it must be true