MANILA, Philippines — President Duterte on Thursday claimed a presidential aspirant in the May 2022 elections had been doing drugs, especially cocaine.

He did not identify the candidate by name, but Duterte said the male aspirant was from a wealthy clan with a well-known patriarch.

“There’s even a presidential candidate who is using cocaine … from a wealthy family,” he said in his speech at the meeting in Mindoro of the national and regional task forces to end local communist armed conflict.

Duterte blasted the candidate’s qualifications to lead the nation, questioning his contributions to the country.

“What has this person done? I am just asking. What contribution has he made for the Philippines? That is what I want to ask. Why are the Filipinos so crazy in supporting this person?” he said.

It was the first time during this election season that the President has revealed that a rival of his anointed candidate for the presidency, Sen. Bong Go, was facing, among others, an alleged drug user.

One of Duterte’s centerpiece program is the brutal drug war, which had left more than 6,000 dead. Human rights groups say the figure was closer to 27,000 and filed a case against him for crimes against humanity in the International Criminal Court.

He said he was not sowing intrigue and urged the public to “find out” for themselves. 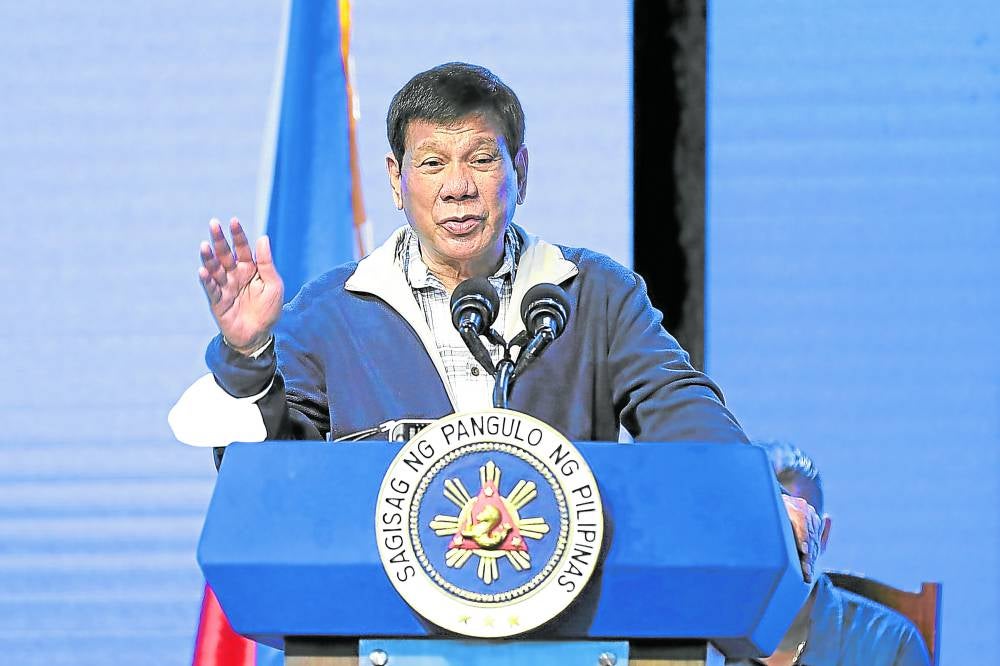 Duterte said the “fascination” for this candidate may be because his supporters did not really know the person.

“It’s up to you what kind of person you want. That’s yours [to decide],” he said, adding that he had already given a warning.

“And he is a very weak leader—his character—except for the name. The father [was], but him? What has he accomplished?” he said. “He may win hands down. OK. If that is what the Filipino wants, go ahead, as long as you know,” Duterte said.

The President’s daughter is running for vice president in tandem with ex-Sen. Ferdinand Marcos Jr., son and namesake of the dictator, who was ousted in 1986.

Marcos’ eligibility to run for public office has been questioned in the Commission on Elections due to his conviction for tax evasion in 1995.

Duterte questioned his daughter’s decision to be Marcos’ running mate as she was topping the surveys, ahead of the former senator. —DAPHNE GALVEZ